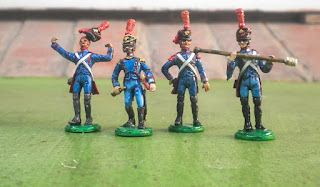 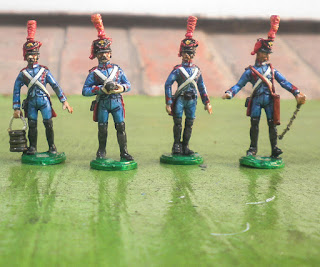 Will I sound self-satisfied if I remark that I am very pleased with how these fellows turned out?

I suppose I need a gun, now.

Next up, I'll be starting work on some RHA. Already cleaned and primed.

Posted by Bloggerator at 9:11 AM 8 comments: Links to this post

These are rather nice figures and not incompatible with the Bicornes in the last post. Perhaps just a smidge taller. That's mostly due to the height of the bases though. heir anatomy is fairly natural and the sculpting simple, but not to the point of naivety. I do like the combination of smooth surfaces and shrply-incised detail which works well with washes. Likewise, I am very enamoured with the ability to add 7-8 figures to a single gun crew.

These miniatures are currently drying out their intermediate matt varnish coats in this picture. I often apply varnish to miniatures in the middle of the painting process if I think the paintwork will need protecting as the show goes on.
Posted by Bloggerator at 4:48 PM No comments: Links to this post

Well. at the Duchy of Alzheim we are busy packing things up as our renovations seem likely to re-commence next week. This is a good thing as it will render us with a more civilized amount of that unutterable luxury - more living space. In my personal case this will also mean a dedicated hobby space that I have taken to calling a 'shedio' - part shed, part studio and wholly man cave.

However, before this is to happen, current hobby activities need to be reduced to the size of a paining tray again and so I am now just painting - in dribs and drabs - just a few Napoleonics.This isn't really a problem as I am deciding on a few long term projects at the moment and deciding whether I can face painting a few hundred fairly gaudy troops will be a deciding factor. And just to complicate matters a little, I seem unable to choose between Spain and Egypt and so am plumping for both. I also am entertaining a horrible suspicion (based on starting to re-read Marbot) that I may also get stuck with the French and Austrians in italy in the 1790s.

Anyway, that's another kettle of fish and I have hopes of some inter-operability at least among the cavalry and the guns. 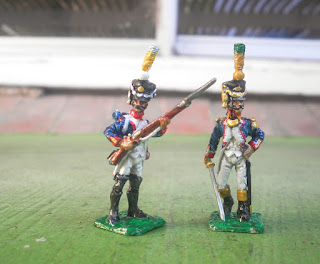 Here's today's issue. What's wrong with this picture? I started painting the line infantryman on the left initially thinking he's an elite company bod. Look at that plume! A Voltigeur, surely. Then I noticed he's got no epaulets. Uhh. Ok. A fusilier then. The chamois collar became red. That's right, I thought. But then there is that plume. Did they wear them? I always was under the impression that he ought to have a pom-pom (I'm thinking of the 6-company structure...). His shako is rigged for full dress, though, so perhaps a plume is plausible?

Then there's the officer. Is his plume OK if he's with the light company? Or ought it be white?

This is what Napoleonics do to a man.

The figures themselves are Bicorne and lovely. The officer was very easy to paint, the fusileer less so due to his strapping nature, but we got there in the end. Each took a painting session each to get through. More have been purchased.

Next up are some Formost 30mm Line gunners which look very dishy - technically for 1812 on, but I won't tell if you don't.

Posted by Bloggerator at 5:50 PM 8 comments: Links to this post