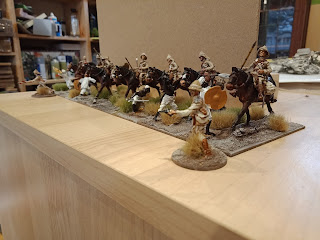 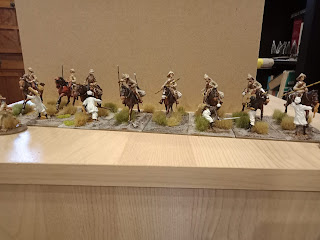 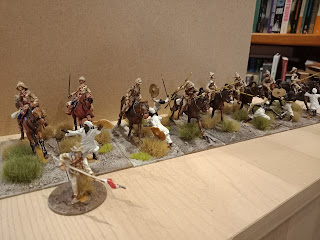 Death or Glory for the 21st Lancers.
Posted by Bloggerator at 7:05 PM 6 comments:

Basing up the NWF

The idea here is that each cavalry base will be a vignette and the whole twelve figure unit will be a species of moving diorama of this unit's most melodramatic moment.
Posted by Bloggerator at 7:44 AM No comments:

On the workbench - Medievals

Over the past few weeks I have been engaged on a campaign  to clean up my painting table. Just as a break from painting Britains.


It had gotten pretty bad, bad to the point where all the action was taking place in the only clear part of the desk, a strip abut 5 cm deep and 30 cm wide. Now, this was getting a little unsustainable, so off I went. There have been all sorts going out. A small herd of horses, a couple of knights, one a Crusader:
The other a later type in Maximilian armour.

French Fusiliers for Napoleon's romp through the Ottoman Empire and a few more figures for the North Western Frontier.

I glow with virtue.

This week though it's been a handful of medieval archers.
I liked how these turned out so much that I started making some hoardings for them: 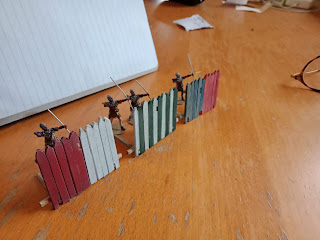 The palings are sliced up strips of coffee stirrer glued to strips of skewer, although I think I may have had a less fiddly time with more trips of coffee stirrer. The eagle eyed among you may note that they are in the same livery colours as the archers. The idea here is to ultimately get together a medieval siege setup.
Posted by Bloggerator at 11:38 AM 4 comments:

24th Foot, of course, or the South Wales Borderers for this later fellow,

Yes, I still need to put his arm on, but the varnish is sticky and I couldn't resist. 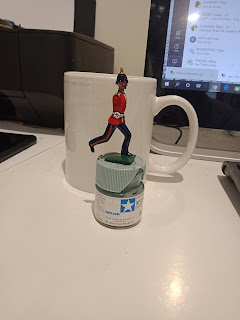 One of my favorite of the Wm. Britains poses and really a breeze to paint them as well. More in the coming days.
Posted by Bloggerator at 8:57 AM 2 comments:

How are you all? What's happening out there?

How are you filling in those long days and evenings in lockdown when you are in quarantine, or cant get out and a bout as you might like in the evening or over the weekends?

I have decided to make this my Time of Unfinished Projects.

Each week or fortnight (depending on how much of the particular project is in stock) I will be picking up a different unfinished project and moving it along a little. Last week it was Willie Highlanders (pics to follow),  this week it's recast "Wm Britains", 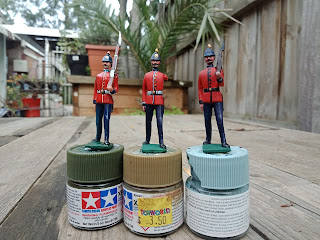 They do come up well. I had forgotten how elegant they are in their line and how they take as much detail as you are prepared to put on them. The black lining may not be to everyone's' taste, but I am having a go at emulating the Henry Harris painting style.
Posted by Bloggerator at 8:40 AM 7 comments:

For my birthday this year, I bought some of the Peter Dennis "Paperboys" books, having seen them in action on Aly Morrison's blog.

I thought they looked quite charming, and when I saw one of them was a "Little Wars" reprint, I was gone for all money.

So I started assembling a base of WSS Bavarian Grenadiers. 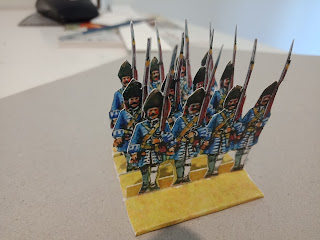 Not too onerous to cut out. I'd probably benefit from making a few stands at a time as a batch. Good fun so far. I am looking at a scenario for the Schellenburg, 1704 as my build target. Let's see how we go.

The Schellenburg was an early love of mine since I first came across it in Mil Mod years and years ago and I'm chuffed to be building a neat little Bavarian Army in that cause.
Posted by Bloggerator at 4:51 PM 11 comments:

My North West Frontier project has been coming along as I move into Cavalry country. 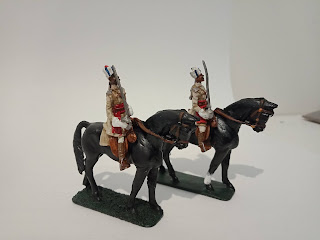 Firstly we have a couple of Sowars of the Corps of Guides. Seminal troops for any NWF project. 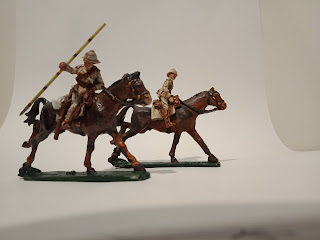 And secondly, some British Lancers. Looking closely at them , it's very apparent that these are meant to be the 21st Lancers at Omdurman. It's my intention to mount these figures on comparatively large bases - say 80 x 40mm to accommodate the rather large horses. I am intrigued by the possibility into making some of these into mini vignettes which might make up into something quite impressive when the whole regiment is eventually assembled. I have just about enough castings to produce a full Squadron (in TSatF terms) of 25 figures - two troops of 12 figures plus a Captain commanding...

Now, just to wrap up for the day, a miscellany of just varnished odds and ends: 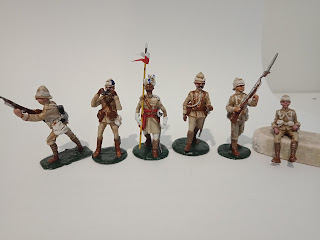