The Defense of Strudelburg - Croats 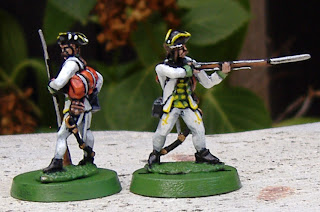 Here are a couple of new Croats/Grenz.
I've done them to represent the Szluin Regiment of the Karlstadt Generalcy. You'll note that they are the two RSM Croats with their felt tshakoes chopped off and replaced with tricornes. I did this on the basis of a throwaway line in "Instrument of War"* referring to those troops having at one stage tricornes. Whether they retained them for long is another matter...
You'll note the man on the right has a bandage on his head. This is the legacy of me being too eager with cutting his old hat off, then being too generous with the Green Stuff as I tried to patch the gap!
Overall though, I think they look pretty cool; I really like the overall effect of the colour scheme.
The RSM Croats are very easy to paint, too. Try them for yourself some time. I'll soon be painting up an Austrian Officer with a Hungarian infantry head swap on him to "exoticise" him enough to serve with the Croats.
It strikes me that you could almost mistake them for early (mid1740s?) Hungarians, especially if you replaced the sabre with a plastic card sabretache. Just a thought.
*Duffy
Posted by Bloggerator at 10:36 PM

Nice paint job - as always! Good to see the Duchy is getting so many reinforcements.

Not that I want to distract you, but how are Sharpey's lads?

Sharpey's ( or rather Sean Bean's lads) are taking a well-earned rest until I break the back of this project. They will eventually see some action against the Lancers and Chasseurs a Cheval whom I have lurking in the wings.

I ought to paint up some British regulars so there are some officers who can look down upon him as a whoreson motherless rogue while he can snarl back that they are soft southern ponces.

Your Croat conversions are colorfully marvelous! How many will you eventually field together in a unit?

Stokes - I'm thinking of standardising on a 15-man company in line with the "Croat Terror" rules.

I'm thinking that I'll build up to four companies this year (three red, one white) and take out an option on another two for next year.

The white-coats in tricornes are a historical fudge, but what the hey...

Have you mounted them on the GW style stands for game purposes as light infantry or is this just to hold them while painting?

They're on the GW bases because they are easy to get a hold of here in Australia and relatively cheap-ish. I DO keep meaning to get around to properly terraining them one day... The job gets bigger the more I procrastinate!

Er, I just realised that I didn't answer the question! I'm using the 20mmx20mm square bases along with the 40x40mm bases for my line infantry and the larger round bases for my lights - sort of to force a loser fiormation on them. Any rules that I use, I bend slightly to conform with my basing.