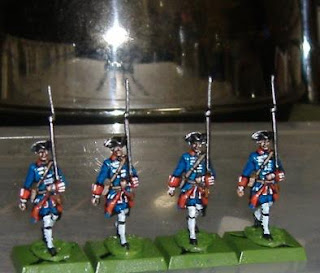 It's strange to say this: for someone who has a minor Everest for a lead mountain, I am running short of certain categories of unpainted figures.

I am out of Croats, there is not a spare dragoon in the house and I have only a bare handfull of French left. Rather than buy anything more just at the moment, I've been painting the remaining French as Gardes Francaises. Once upon a time I had a standard infantry organisation set at five companies of eight figures (each included seven privates and either an Officer or a musician), and a pair of ensigns and a mounted colonel for a regimental staff.

Ah, the days of youth.

Now that I am older and wiser, I find it much more appealing to equip my line regiments with four companies of fifteen figures (three of musketeers, one of Grenadiers, each with twelve privates an officer, an NCO and a Musician) as well as the staff. Thus it has been necessary to go back over my units and increase their numbers somewhat; a slow process, but a rewarding one.

The Gardes Francaises are the current beneficiaries of this scheme. I finished off a little batch of four last night and I will have sufficient time this evening to have a good crack at another five as well as a musketeer for the Austrian Regiment "Arberg".

This latter figure is part of a process of prototyping a new regiment where I paint one or two of each of the major types of figure that a regiment will need just to work out what details I'll need to include on the figure (and which can safely be left out or fudged...) - co-incidentally this leaves me with about a companys' worth of figures and a feeling of getting a little head start on the project.
Posted by Bloggerator at 7:44 AM

Those look like RSMs, correct? In any case, another fine paint job. I'll have to do some of my troops in a similar uniform at some point in the future.

Quite correct on the RSMs.

Thanks for the kind words - I'm just really trying tp psych myself into re-commencing my Prussian Fusilieers!

Hello again Greg,
Great looking figures - I am impressed with the speed with which you turn these smart chaps out! I had to leave this comment partly for the novelty of time travel as it is still Thursday here in blighty.
Ian

I've surprised myself by getting through eight Olley Points (q.v.) so far this week! hoping to make it about 12-13 by this evening...

Speaking of time travel, I'm waiting on the Dr Who Christmas Special...