Illustrated is "Altpreussische Uniformen" by Hans Bleckwenn. This book is a nice little snapshot of the Frederician Army. It's not complete, but has a smattering of different regiments of each troop type. Each is illustrated with a colour plate depicting the basics of the Privates, the NCOs, the Officers and the Musicians uniforms as well as numerous small details like their colours and standards.

I had quite forgotten that I had ordered this book via the Internet until it arrived in my letter box. On examining it, I was so taken by the plate for von Reuschs' Hussar Regiment number 5 that I had to try painting some figures up as this regiment. 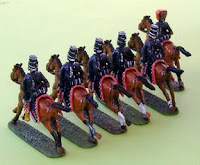 The figures are RSMs, on one of the galloping horse variants. I used the the Prussian Hussar in Mirliton for the troopers with an Austrian Hussar as the Busby-wearing Officer.

They are quite nice figures, but can be a little tricky to paint on account of the fine-ness of the detail. Try a beer instead of a coffee while you are painting these boys.

Painting was done from a black undercoat with a pretty liberal amount of mid-gray highlighting. It took me the best part of a week to get them done. The "dagging" on the saddle-cloths was done by painting the whole pattern in white and then going over again in red - this let me leave a fine white border while also brightening up the red.

It's a nice little find - I think I got it through bookfinder.com for only a few euro.

It's an old library copy, with the usual stamps and so on. Nice touch; it's about the size of a postcard, so it's very easy to keep on my person. Perfect for those train trips with nothing better to do!

Welcome back, sir! We have missed you.

The hussars look wonderful (as always) . . . but my favorite hussar that you've painted is still the "Volontaires de Saint-Victor" from your January 24, 2006 post. I really like his looks.

Here is a "tiny" URL to save people the difficulty in looking it up:

Greg,
Very nice paint job. How do you manage to paint so many in a week? I am in awe.
Ian

Lovely job. What did you use for attaching the riders to horses? I've got a dozen of the Hussar with Busby waiting for me to get gutsy enough to attempt their paint job after I paint some of the others.

That book is a boiled-down version of the full 4-volume Bleckwenn, which does have just about everything you would need to know about Frederician uniforms of the mid-18th century in the same handy format. I managed to get the whole thing for about £25 ($50) last year (including postage) via Abe Books. Well worth acquiring!

I remember that Hussar! I was experimenting at the time with French Light troops and I was trying to see who had the snazziest uniform. I'll do more once HR 5 is done.

Ian, I have no idea - I'd been on a painting hiatus for a week or two before and then just knuckled down and did half an hour before and after work. My painting table is more-or-less permanently set up in front of the television and whenever we are watching, I am painting.

SC - with superglue. I thinl a better solution would be to get a little doughnut of greenstuff and lay it on top of the horse and use it to secure the rider. That lets him be more securely attached. I don't really like superglue.

David, you are convincing me! Abe books here I come!

All the best - Greg

The four-volume complete work is entitled Die friderizianischen Uniformen 1753-1786 and covers all of the units of that period. Only mine cost $120 Canadian (about US$90) about 6 years ago.
8=^(
andygamer

I checked on Abe Books yesterday and the cheapest I could find for the Bleckwenn was about $80 plus postage so I must have been very lucky last year to get them for around $50 inclusive. Sorry about that!

But a search through this bookshop portal for "Hans Bleckwenn" produces some much more reasonable prices: http://www.onlinebooksellersdirect.co.uk/