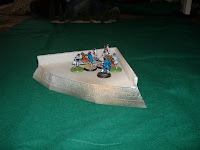 The dawn is quiet, as the poet once wrote. Quiet but for the crack of cannon fire as Bombardier Jolicoeur screams obscenities at the cloth-headed soldats of the troupes de terre who are fumbling clumsily over his eight-pounders.

"Sponge out you thick sons of bitches! Out!" He slaps his palm against his forehead in dire frustration.

Load that Cartridge, Number two! No, not you - you're number Four. Number two! Yes, you!!! Now the wad, and the ball. You'll need another wad to hold it in... oh, start again! Get the worm!"

Meantime, the Languedoc Regiments' piquet company leaves the fort and enters the woods. Every man a picked man, quick nimble and active. They are the Regiments light infantry.

Jolicoeur is happier to scream at the gunnery trainees; better that than spend night after night in the woods with them.

What's this? the Grenadiers, too? What's going on? Must be some operation. Still, it's nothing to do with him.
"Run out!" ah, the mad music of the wheels on the boards of the platforms. 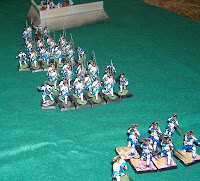 The whole regiment is on the move South, marching in Grand Divisions. Must be a big one.
"Fire, you sons of bitches!"