The Affair of the Partridges 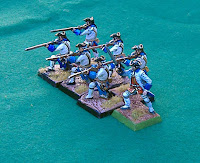 At the start of Turn 2, the French grenadier Company was due to arrive on table. It duly did so. 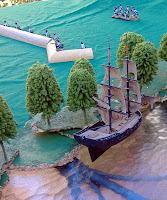 Iroquoise lurking in the background, adding nothing to the scenario save good looks. She's an old 1:100 brig that I built a few years back but never gort around to waterlining. I will use the off-cuts to represent a destroyed ship.

... while the light Company takes a more direct approach.

A roll of the dice ensured the Canadian militia entered the field at the start of Turn 2.

I was snap-happy enought to take another shot of them!

Will the French regulars be able to hold out? The light Infantry spent the whole of Turn 2 extending their Field Works so they's be able to accommodate both themselves and the Grenadiers when they arrived.

A general view. The French regulars are in the background, the British light Company in the fore. Rangers are in the woods at the right, whilst the French Militia are entering mid-table to the left.

Posted by Bloggerator at 3:14 PM

Neat set-up Greg! Your game just goes to show how satisfying a smaller game can be in all senses. Not every affair needs to be the size of Leipzig or Borodino, something I think many of us (myself included) forget from time to time. Bravo!

I agree, nice photos and I like that people are showing some actions with fewer figures! Hopefully it will encourage others who are thinking about getting started. You can start with a small number of figures and build up as you go. As cool as large battalions and 30 foot tables look you don't HAVE to have hundreds and hundreds of minis before you can have a fun game (you don't even need dozens of figures and a "standard" 5x7 or 4x6 table - you can do some fun gaming with just a few minis and a card table or similar). :D