Where better to start than with Fort St Elmo? It seems to me that there have been some misconceptions concerning its' trace as reported by Ernle Bradford in his book on the Siege.

The fort is described as a star fort with three outworks in the shape of a pair of ravelins (one built in some haste of timber and earth) and a cavalier. Now, how are we to interpret this? 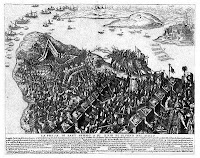 Take the image above, an engraving of a fresco of Matteo Perez d'Aleccio. The fort under siege is St. Elmo. Note that it is simply a star fort. There is a structure to the side of the fort closest the peninsula-tip, and another to the left of the fort.

The image below is a modern interpretation of this image and others. I believe that what we have here is a star fort with a ravelin at it's left, another "ravelin" or more properly a "rivelino" (see the great "ravelin" at Sarnzello) oriented at face the tip of the peninsula. I'm not yet persuaded one way or the other that the tower-like structure is in fact a cavalier (or raised battery - the battle accounts don't read that way to me) or whether that might be the structure linking the two named outworks being pierced for artillery and arquebuses to command the ditch. Certainly I think that the tall structure still exists, having been integrated at a later date into the greater structure of the fort. Accounts of the siege do stress that once the Turks took it, they were able to dominate the interior of the fortification, as the Ravelin they captured was taller than the fort.

Discuss!
Posted by Bloggerator at 7:55 PM