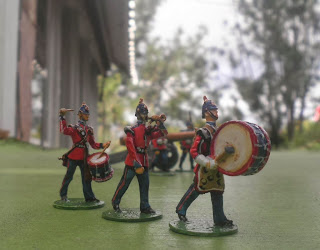 I'm just starting to get into the swing of things for my "Littler Little Wars" project. As you can see, I've made a start on a few things as I try to come to grips with the overall look I want for the miniatures. I've compromised to a degree - I didn't really want to do a job as straightforward as that on the original Britains because I want to be able to use these with my Franco-Prussian War minis. 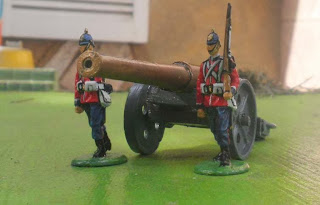 I won't be using line infantry as gunners. Fortunately the Stadden infantry come with a moveable rifle-arm on a peg which I will replace with something more suitable for a gunner. With a blue coat and a ball replacing the spike on his helmet, I feel he will do admirably.

How could I go past this glorious Boer War 4.7 " gun from TVAG? I bought a brace to make up a neat little battery. I tried to keep the paint job as true to the Britains gun as I possibly could. I might detail the spy-glass just a little... Half a dozen gunners to serve the gun with an officer to direct their activities per piece, two pieces per battery and a mounted officer to oversee the lot. I'd love to find something suitable to use as a GS Wagon.

While I was away I took along a few horses and a few notions to try out. I'm quite pleased with how they turned out.

And Skinners Horse take them out for a spin. They all need degrees of touching up due to handling whilst they were being painted. Curses! Oddly though, in looking at them I am reminded that Britains boxes only held about half a dozen cavalry and eight infantry. Food for thought?
Posted by Bloggerator at 9:46 AM

They look good! I'm not fond of the black lining and the pants don't look nearly dark enough (check out pictures of todays foot guards, the pants haven't changed, almost ore black than blue) but over all I like the look, love the lancers and their horses!

This is shaping up to be a real visual treat.I too love the lancers and their stirring mounts.
What units are being considered next for paint and or purchase?

Yes, agreed on the trousers. I'll dig out a darker blue.

Future units I am hoping will be Stadden Hussars, Light Dragoons and Lancers from the Crimean War range. I may take up some of the excellent Willie Crimean War mounted command figures as well. In the further future I hope to add Crimean Russian infantry and artillery as well as some Willie Cossacks

Ahhhh Cossacks! Every now and then I get the urge to do a Great Game thing with Brits facing Russians and Afghans in the mountains.

I get your point about the contents of the Britains boxes and wonder idly whether a small unit size has its merits in this case, echoing the nostalgic legacy. Not everything has to be "big battalions" of course, much as we loves them in their place :-)

I'd originally decided on 18 infantry/12 cavalry to harmonise with my FPW armies, but... but... I have to ask myself whether I am just being lazy on the painting front? The figures are fairly demanding to clean up and paint. I have always enjoyed larger units, but I wonder if in this case it won't be more about the pictures I can produce of a few nicely painted figures. I've a young family and am time poor as a consequence.

Two thought, one is to begin by postulating an alliance between one the British and one of your FPW era armies so that there are fewer troops to be painted initially (2 armies vs 3 or 4).

The other is that by the time the redcoats were wearing piked helmets, close order battlefield units were passe and combat would normally be companies deployed as skirmishes order. So, perhaps 3 x 6 figure companies to form a battalion but with the option to do as at Majuba and have 1, or 2 companies from each of several regiments operating together. That way you can try several unifor variations with the option to one day go back and build the detachmnets into whole battalions.

Nice idea Ross. I'll give option 2 a go and see where it takes me.