The Bush Veldt Carbineers were a Light Horse in South Africa notorious for the conviction and execution by firing squad of two of it's officers and the imprisonment of a third for the murder of numerous Boer prisoners of war. They were just one of many small units of what were basically irregular light infantry raised to prosecute the guerilla war against the diminishing Boer commandoes as the Boer War ran down in late 1901-2. 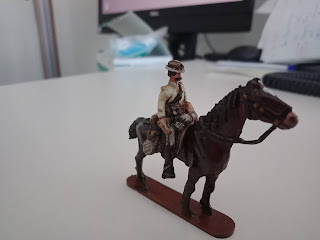 Their job was to out-Boer the Boers. They are a troop type that is absolutely necessary if one is to war game the later phase of the Boer War. I'll probably make up the troopers from Willie Lancers with heads swapped from figures with slouched hats.
I am also considering getting together a unit of New South Wales Lancers which could probably be done in much the same way with or without lances. 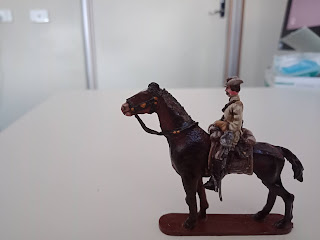 This figure is a lightly converted US Cavalry officer from the Willie "Wild West" range. Sadly the horse looks a little like an over-sized dog!