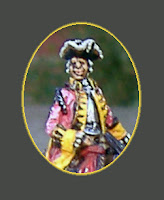 The Marquis de Gonsalvo
In the inevitably gray light that preceeds the dawn, silent files of men were issuing forth from the Gallispan camp.

Each man bore a burden. Some carried ordinary tools in the shape of shovels, mattocks and pick-axes. Others bore stranger items – long bundles of brush-wood that took two men to handle; these were called fascines. Some men wheeled in small carts or simply rolled gabions, large basket-like objects, open at both ends, woven from supple withies.

At the softly-voiced commands of their officers and NCOs all these men stopped and formed a long line facing the Alzheimer fortress.

The Marquis de Gonsalvo dropped his handkerchief fluttering to the ground. At this sign, his engineering officers made their last adjustments to the line, necessary since it was almost as long as two infantry battalions were wide! The men then planted each before themselves a gabion and started to dig.

As they dug, the soil thus excavated was flung up into the gabions, first to fill them, then to cascade in a natural rampart on the side facing the fortress. The fascines were used to bind the rampart laterally and to top the gabions off.

Whilst the line of the first parallel was being constructed, other parties, each under the close supervision of an engineer began to build one at each end, a redoubt roomy enough to hold an entire company of infantry. Gonsalvo noted with satisfaction that Brunetti his Chief of Engineers had taken him seriously on his worries about having strong places where he could shelter his infantry as they waited to counter-attack the inevitable raiders he was sure would come with mischief in mind!

He noted that Brunetti was keeping busy supervising the cutting of some embrasures in the new parapet. He was a good, conscientious officer. Breathing deep of the sour smell of the freshly-turned earth, he wondered if this might not be the odour of success?

Engineering officers are issued at the rate of one for each infantry regiment a side has.

A working party needs to be supervised by an Engineering Officer for relatively complex tasks. Each party can create 12" of parallel in a strategic turn.

"Gonsalvo" elected to build a first parallel wide enough to take two infantry units minus their grenadier companies which he intends to house in the redoubts at its' extremities. In the centre is a small battery position in which he'll be mounting a pair of battalion guns for protection against raiders.

My infantry units have a frontage of approximately 20" and thus we need four working parties to open the parallel, another two to build the redoubts and another to create the small battery position, for a neat total of seven fully-employed working parties.
Posted by Bloggerator at 3:06 PM

Engrossing...
Are you taking pics?

Excellent opening description, and especially liked your notes... I'm looking forward with interest to the first sap being opened, and what the reaction will be! :o)

What a great introductory narrative to the coming siege! And your engineering officer at the top (Gonsalvo?) looks lovely. Is he a Suren/Willie figurine?

Jean-Louis, no photos as yet - I'm playong out the opening moves on a map for now; as I start opening batteries I will transfer the action to the "real world". Minor tactical actions (sallies &c) will also be played out and there will be photos at that point.

Steve, I like the notes too. I had been planning to include them from the start and I'm pleased by your positive comment. They let me explain a little of the mechanisms that stand behind the narrative.

Stokes, you've picked him, the Willie in the picture is Gonsalvo, the preening devil!

Gents, thanks for your kind comments. I'll be writing up the Alzheimer move today, so watch this space...

Makes sense that you have no pics yet.

I am curious, do you have the table layed out for the start of the actions?

Do you have some 'bastion pieces' that you can re-arrange as desired, or are you working from a pre-built situation?

If I take you correctly, there is NO table layout at the moment; all the action is taking place on a map. i just don't have the table-space.

I'll game out smaller actions (a sally to wreck a battery for example) on the table-top, and intend to transfer the action from the map when the Gallispans have opened the third parallel.

I hope that answers your questions - feel free to drop me a note if you want more.

So the 'scale' is such that the bastions will not be 'on' the tabletop unless or until there is a breach and the storming parties are ready?

I think I'll transfer the action to the tabletop (including the bastions &c) when the third parallel has been opened and then play out the construction of the breaching batteries and the final hammering of the works from close range.

Had I more space, I'd play the whole thing "in the round" rather than on a map!