I have been researching Fort Little Niagara these past few days with an eye on the goal of building it for my extended Niagara campaign.

There is very little pictorial evidence.

This link points to a reconstruction that is based on the written evidenceso far as I can tell. As can be seen, it’s a “U” shaped stockade terminating on the river with a block-house at each of the corners that face the portage road.

I’m not too sure that the use of block-houses in this representation are accurate, but they are a valid interpretation of the word “bastion” as mentioned in my 1994 edition of Pouchots’ Memoir. Keep in mind though that they could also be interpreted as square projections of the basic ground-plan of the palisade with a firing-step inside with perhaps a stout little cabin as a redoubt within. I'm thinking here of other French Frontier Forts from Chartrands' FORT 75" published by Osprey. 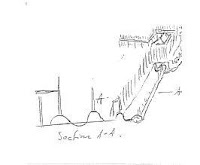 My alternative interpretation of a "bastion" at Fort Little Niagara.

This next link on a way marking website shows a picture of what is called a barracks chimney built in 1750. If nothing else it was at least as tall today as it was then and would have serviced a building of at least two stories. More than that we cannot tell.

Pouchot describes the site as flat and good for erecting earthworks. I think we could surmise that there were none or minimal works at the site; a ditch and bank at most?

Let the imagining of the fort begin!

Posted by Bloggerator at 9:31 AM

Greg,
When i built my version i interpreted bastion quite literally - so i favour the version you have sketched. One thing to bear in mind is that the stockade may have been 'indian style' - by that i mean a sufficient gap between each upright so troops could fire between the posts (rather than having to fire over them). That was the arrangement at Fort Bull - and it cost the garrison dear when the French raiders gained the stockade first.

Certainly worth thinking about.

It reminds me of the Great War "race for the parapet" if you take my meaning.