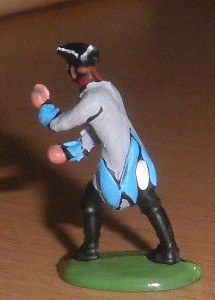 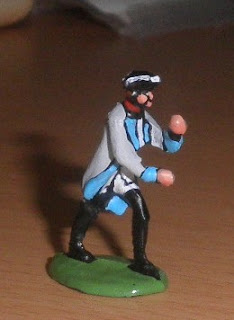 Nothing much today. I'm experimenting with the artillery and painted this fellow in what is a colour test for the rest of the Gunners' uniforms.

The observant among you will note that he is in the traditional Alzheim white small clothes with the red stock whilst his turnbacks are in the armorial pale blue favoured by the Electoral family.

I am ruminating upon the colour the gun carriages ought to be. Baggage wagons, pontoon carts &c would also be this colour. Yellow is out as this is the colour of the Imperial guns. Red contrasts nicely with the pale blue that is going to be the dominant colour of the army. Pale blue would at least go with the theme. Green would clash rather, unless it's a dark green.

In other news, I've put paint to plastic for IR#5 "La Rosee". These chaps look simply delicious in their pale blue coats with the fuschia-coloured turn-backs. I've only a dozen or so and that will pretty well run me out of plastic line infantry types and I'll be starting to top my units up with metal figures.

However, this does bring me to the point where I'll be starting a light infantry unit out of some Barry Minot plastic AWI American light infantry that I bought of a certain magazine editor/graphic designer chap in a pub some years ago. I've not yet decided whether to paint them on traditional Jaeger colours (Green turned up Red) or to put them into a uniform like say the FreiKorps Lacy (White turned up Yellow).

Posted by Bloggerator at 7:49 AM

Fire at Will said...

Well, I will admit to having a few guns painted in mid-blue already...