Painting the Spencer Smith infantry has so far been an interesting exercise. I had started intending merely to touch them up, albeit re-painting the dark blue coats in light blue in line with the inspiration provided by IR#2  - see my previous post. That went rather by the board last night as I worked on my first five and in the end, I more or less went for a full re-paint. Curiously, re-painting the miniatures was quite easy, something I attribute to the previous owner having done the hard work in blocking in the areas of the figure I'd need to paint. It was not unlike colouring in. 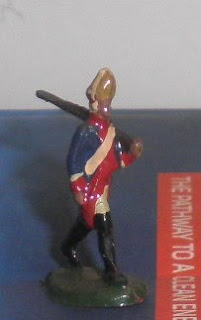 "Before" shot of a Grenadier of von Browne's Regiment (IR#4). 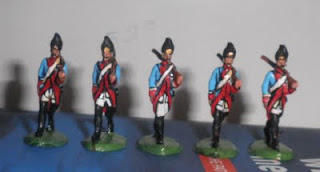 Re-touched Grenadiers. Note that I changed what had been a conversion with paint of a bearskin to a mitre back to a bearskin again. Just for the heck of it. The skirts of the waistcoat are merely indicated with a lick of black paint. Apart from the dashing light blue coats, I brightened up the facings with some GW Blood Red, overpainted the cartridge belts where the varnish had yellowed them over time and did a great deal of black-lining to try and pop the colours out and to define the rather blurry transitions between objects on the figure.

There you go, the full 360-degree treatment. I painted on a white-laced 'flamme' on the bearskin and added a strap to the water bottle on the left hip.

I'll be basing them on the Litko laser-cut 3mm ply bases, painted plain old goblin green to protect the fragile pastics. When I opened the box, some of the figures had snapped at the ankles and the odd musket had likewise succumbed, so this was an easy decision to make. Superglue made good the breakages, but I'd not trust it to last forever. One thought that occours is to make at least one figure per base a metal and use it as a handle for those moments when gripping the base itself is inconvenient.

Onward and upward.
Posted by Bloggerator at 8:01 AM

You have enhanced the figure greatly with your efforts- excellent work.

No point in having 'em if they don't look elegant. De St. Maurice salutes you. - Mike

Do you know the children's picture book Swim Little Wombat, Swim? It's very popular with our toddler son at the moment. There's a page where his friends Rabbit and Koala are cheering him on after Wombat's new friend Platypus has taught him to swim. So, it the spirit of that passage. . . Paint Greg, Paint!

I don't know it Stokes, but I *do* appreciate the sentiment.

15 figures completed and another four part-done.

I'm already contemplating the next batch of six.