Action on the Frontier!

It is 1759. The siege of Fort Niagara has begun. The British have sent our small ranging parties to scout for any French relief forces. They are small companies of Rangers, troops from the New York Regiment and light infantry from the line battalions in the area.

One has blundered into the path of the van of the force of Captain François-Marie Le Marchand de Lignery and is now racing for the relative safety of the lines at La Belle Famille. A large party of militia, Compagnies Franches and Iroquois.

I'll be making the rules up as I go along.

They will move 4+d6" per move. -3" in difficult terrain.
The objective for the British player - reach the British Lines.
The Freench task is to run the raiders down and destroy them before they reach their lines.

There are a lot of them. The British Light infantry have elected to run down the portage road, whilst the Rangers have entered the woods. As a result they have the Iroquis hot on their heels.

The pursued elect to keep on running. The Light infantry have widened their lead slightly and are just outside of the musket range of the French regulars. The Iroquis are gaining on the Rangers - indeed, they are within musket range, but having moved, cannot fire. What will the Rangers do? Try to out-run them? The Indians can run as fast as them. The Rangers are better shots, though.

The Indians win their initiative roll. Their front rank is within short musketry range. They need a 6 to inflict a casualty. Ten dice are rolled. A single six results. A ranger bites the dust whilst his pals scurry along. The Light Bobs roll well and wheel into the fringe of the forest. The Militia and CFdlM start to sweep around toward them. 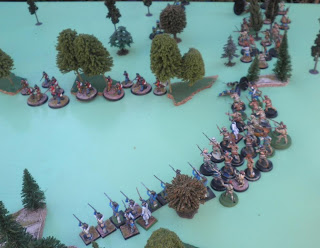 The Indians suffer three casualties from return fire from the Rangers. The Militia, having moved in conformity with the CFdlM take two of their own from the British Lights. 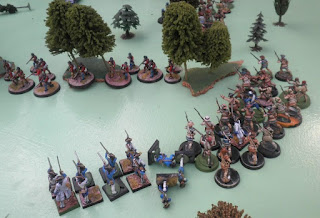 The French move up to the limit of long range. The CFdlM take three casualties at the hands of the Light Bobs. The Militia having moved up with them cannot return fire either. Unseen by the camera, the Indians have attempted to charge the Rangers but have just fallen short. The Rangers give a withering close range fire - needing 5s or 6s to kill at lose range they lay 5 of the Red Men low.

The move started off with the English winning the initiative and electing to fire. Fifteen muskets spoke. Three Indians fell. oh dear me. Because... 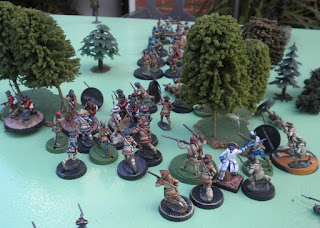 The Militia promptly charged into the Light Infantry who had been depleted by very effective fire from the CFdlM.
Ample revenge for being shot up last move. 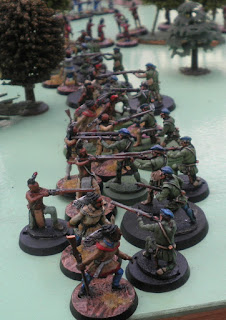 And so did the Indians likewise charge the Rangers. 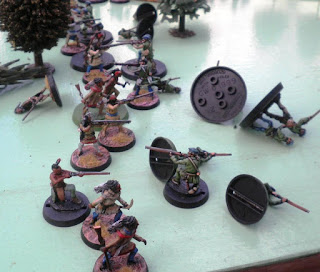 Who fared extremely poorly in the ensuing Melee.

By this stage both the British units had fallen below fifty percent of their original strength and I thought it best to draw a merciful veil over the susequent proceedings. More tomorrow.
Posted by Bloggerator at 9:00 AM

Cheers Ross, I'm live blogging this one. Updates to come during the day.