Isandalwana - a few thoughts should I ever do it as a Convention game.

This post is more a note to myself in case I ever need to go back to this. It's been inspired by the reading I have done around Rorkes' Drift. Apologies if it bores anyone, but this is more so I can get my own thoughts in order.

Pulleine
Battery represented by 1 gun.
1st-2nd/24th Regiment of Foot - 80 figs
'Colonial' Cavalry and MI - 6 figs
Natal Native Contingent - 80 Figs
Throw in a handful of figures for Engineers, cooks, camp followers and so on.
About 200 figures in total.
Need at least 300 Zulus with casualty recycling.
Note i have dispensed with Durnfords' artillery and the rocket troughs. They had no effect on the battle and seemed pretty derisory to me anyway.
If ever this all came onto the table, I would picture a game of three parts:
1. The engagement and overwhelming of the firing line, which is where the OOB above would come into play. Since throwing down that OOB, I have learned that only half the infantry were in the firing lines as the rest were packing the camp up. Perhaps as few as 50 men per company. Maybe 300 infantry in the line Companies in total. 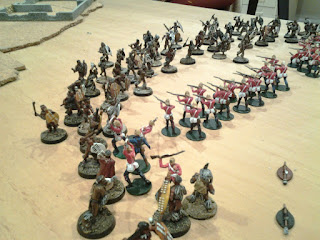 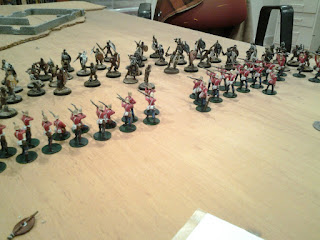 2. The life-or-death struggle in the Camp. The remaining half of the infantry plus supernumerary figures fighting back-to back in a large skirmish game among tents and wagons. The goal would be to attempt to defend the camp or failing that to exit in good order towards Fugitives' Drift. Defenders ought to be outnumbered by three-to-one prima facie with casualty recycling.
3. The pursuit to Fugitives' Drift. 10-20 assorted British figures. Game would be played down the length of the table. Aim is to get as many Brits off the far edge as possible. Zulus would enter from each table side as the game progresses. I imagine four entry points on each side that would activate as the retreating figures 'trip' them by mofing parallel to them. Randomised numbers of Zulus then enter - perhaps 2D6 per entry point.
#1 would be a large scale game. #2 and #3 would be large and small skirmishes respectively.
Posted by Bloggerator at 10:39 AM

Another very dangerous thought, my dear Mr. Horne, Very dangerous indeed. Reading your thoughts, along with a recent 54mm game, I am sorely tempted to have a go myself. Sorely tempted, do you hear? But as I say, an extremely dangerous temptation. The hobby is fraught with sirens such as these.

A diversion such as this need only entail 80 or so redcoats, perhaps 120 Zulus and a little terrain. Perhaps half a years' hobby time. barely a drop in the ocean.