Or - the project that would not die.

I've recommenced on an old Landsknechts project this week. The paperboys are having a rest for the next week or so.

I was chatting to a chum about his growing Landsknecht forces when I recalled my own; one thing led to another and we have committed to a battle next year of a particularly school-boy sort where "You bring every thing you've got and I'll bring everything I've got.". And naturally this will be kicking off an arms race, and some good-natured sledging.

So and without any further ado, some pictures of where I am at right now. 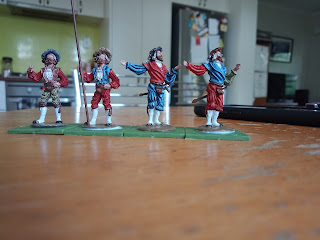 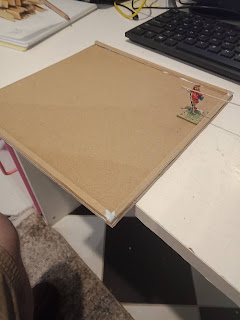 An enormous movement tray for the pike block that will be eight ranks of eight figures. 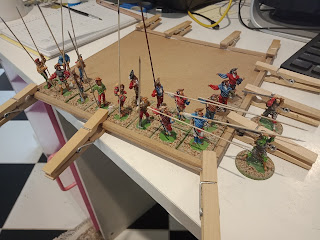 And partially populated with the figures I managed to finish basing yesterday.
Yes, I am going large on this project. I am planning 12 and 24 figure cavalry units and at least two units of pike along with sundry artillery, arquebusiers an other riff-raff.
Don't tell my chum this but at least one of the cavalry units will be based plowing through a broken bunch of landsknechts painted to resemble those from one of his own units, so if anyone can tell me what flags he is using...

Posted by Bloggerator at 8:29 AM

Well, they look super. Your painting style is always such a treat regardless of the figures/period. And LARGE is the only way to go in my view.

Go large or go home, right? I can't wait to set the Human Behemoth in motion..!

And naturally these chaps will be Alzheim's own, ready to dish it out to the Empire again.

Terrific stuff and ambitious sized units, well done. They will look a spectacle en masse . I look forward to seeing this as it progresses.

That 64-man pike block will take some shifting, literally!
Are these Willie figures?

They are lovely figures. I fully endorse big pike blocks, some of several thousands. But big cavalry and arquebusier units don't ring quite so right for me with very occasional exceptions.

I don't suppose you could arrange for a drone with camera to make a pass by your friends house and peek in the windows?

That pike block will be an amazing thing to see when it is done. I' m looking foreward to seeing the finished project. I like your idea about the cavalry horses.

Trag, the project continues to yield results. Another few since the post...!

Rob, it's time I got me to the gym. They are Willies, yes, both the older ones and those remasters that Tradition brought out a few years back. I'll be using the Gens d'Armes from the same range.

Ross, I bow to your greater expertise in the era! :) Ahem, some casual conversation over the past couple of days has given me all I need... heh heh heh.

Jim, I expect you'll be re-doing Seydlitz's Cuirassiers in appropriate style to wind Bill up?