I started painting some Saxon infantry in oh, I don't know, 2006-7.
They have languished ever since, barring the odd spurt of enthusiasm.
Finally, after all this time and a well-timed prod from Jim, I finally got on with them. I still need standards, but with Christmas on us, I think I might be forgiven not having them ready until the new year. 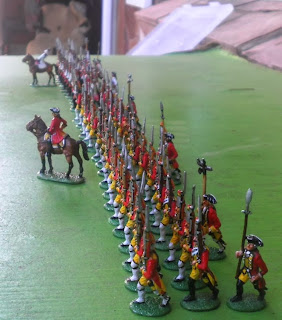 I'm pondering a re-organisation on a 36-figure standard. I've not yet decided what to do with the command figures - integrate them into the line or stand them seperately as you see here. I'm thinking of 30 "hatmen" and a detatchable half dozen grenadiers to allow me to put together provisional grenadier battalions. 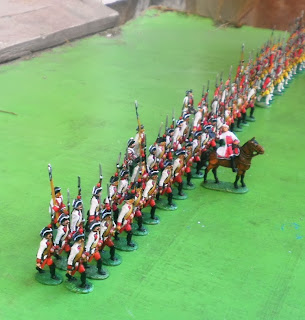 I always did like the various Naploeonics done with Elite and Hinchcliffe Miniatures that adorned many a cover of WI that had the mounted officer just protruding on a funny little polygon.
Posted by Bloggerator at 6:10 PM

Lovely Greg!
Congratulations.
---
My very first SYW units were Saxons. There's something about them I like; the Pirna thing and later campaigning with the French.
---
My own 40+ year old Scruby 25mm Leibgrenadier Garde, von Rochow and two six pounders were on the table for our cancelled game on 14 December. Also out were three squadrons of new Leibkürassiers from Eureka.
---
I also want to get paint on a Eureka Prinz Xaver battalion in 2014. They were outraged not to be painted in 2013!
---
Merry Christmas,
Bill

Splendid fellows indeed!
Merry Christmas to you and yours from all at the Duchy of Tradgardland!

Thank-you very much gentlemen, Merry Christmas one and all.

Bill, I've the beginnings of the third and fourth units on the stocks at the moment, but m0re anon..!

That is a particularly fine honour guard you have there. Wonderful.