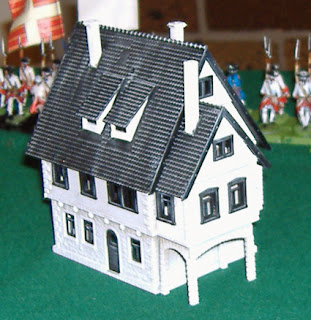 Here's a few things I've been pottering with while
I've been awaiting my latest RSM order.
I've decided to renovate my French regiments, taking them up to a three-company, 15-figures-per company structure with a couple of ensigns and a mounted Colonel to round them out. it's proving pretty painless; as you can see I've just about finished the Berry Regiment. Next on the list is Royal Languedoc with the first three round-outs painted up.
Second is a cheap plastic building from what I think is a Chinese company called "Lee" which I've decided to build into part of Strudelberg. It's actually the second Strudelberg building - the first is a little church with a conical top on the steeple that features earlier in this blog when I was building my Vauban Fortress.
Finally is the converted Austrian/Bavarian Grenadier Officer I've been threatening to do for ages. I'm not entirely sure about how he's cradling hus musket, but we'll see how he looks when he's painted.
Until my next order arrives, I'll probably be painting more Frenchmen and refining my gris-blanc skills. I do have a few other odds and sods saved up for painting just to spoil myself with - mostly aavalry singletons. More later as I get on.
Posted by Bloggerator at 6:34 PM

I see you've kept busy lately. Your Regiment Berry looks marvelous! Nothing like a really BIG unit to stir the senses. And your latest building and conversion are impressive too. Keep painting!

Yep, I'm inspired to keep goung and renovate the others, too. One day I really ought to get around to terraining the bases, too. When I see what Phil Olley accomplishes...

Thanks for the article at Stollen - I much appreciated info on that standard-bearer.