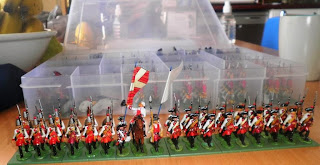 I've started basing up my Saxons and am coming up hard against the point where I have to make a decision. I am now standardising my units on a 36-figure basis for the regular infantry*. Do I want to include my command figures in this total? At the moment I'm looking at six bases of six figures plus an officer or NCO figure per 12-figure company plus a mounted officer, drummer and a couple of standard-bearers.

The alternative seems to be to drop one of the stands of figures and replace it with one mounting an officer, drummer, mounted officer and a pair of ensigns. The first image in this post has just such a mock-up, whilst the others are variations of my current arrangement.

*Why? Because this feels like a good compromise between piddly little units of 12-24 figures on the one hand and unmanageable monsters on the other. I admire those people who can maintain the focus and stamina to put out 72-figure units, but I just cannot do it. Charles Grant-style units of 53 figures are my absolute limit!

I think 36 figure units give me a chance of occasionally finishing them off and eventually offering the prospect of putting on actions like (shall we say) Quebec with a reasonably-sized table. I also think that they represent an opportunity to do two-battalion regiments where you can properly hive off the grenadiers, merge them with those of another regiment and come up with a viable grenadier battalion.
Posted by Bloggerator at 9:17 AM

Stick your mounted colonel, standards, officer, NCO and drummer onto a seventh base, which can either take its place at the head of a narrow marching column, as part of the firing line, or behind it.

It's an option, Stokes. Everything's on the table just now. Aesthetically, a seventh stand in the centre of a battalion line looks good.

Don't stick your mounted commander on a troop base a la Peter Gilder. It just doesn't look right for the 18th Century.

I like the idea of having a couple of NCO s and or drummers positioned behind the ranks of infantry. It looks more realistic.

Of course it all depends on the rules that you are using.

I agree on the historicity of the command elements being "outside" the line.

I do want things to look clean and uncluttered, though. One of the things I don't like about "Charge!", especially in the images of the big battalions in action is that it's quite hard to make out what's going on as all the battlefield clutter of officers, mounted ADCs and so on tend to obscure the action and indeed seem to turn the units into shapeless blobs. Heavens! This is the age of linear warfare after all!

My standard system used to be an 'outy', but, aside from my ACW and mid-18th Century armies (which will probably remain as they are), have opted over the last couple of years of so to adopt the inny approach.

My War af Spanish Succession armies will have 36-figure foot and 24-figure horse units, with command element in the centre. The foot will have 2 Officers, 2 drummers and 2 flags; and I'm thinking the Horse will have one officer, one musician and two flags. The idea here is that if I want a larger scale force, one unit at 1:20 scale can become two units at 1:40 scale.

My Napoleonics I long ago converted from 27-figure standard into a 24, the 3 'command' figures being subsumed into the main body of the unit. What this did was free up some musket guys that were amalgamated with some spare command figures to form extra units.

I have found that any special rules you have for command figures can still be applied, whilst at the same time they become part of the count for figures shooting, say.

In the end, I believe that not having a separate 'third line' command element doesn't detract from the game; having one doesn't add much neither.

I'll probably leave my mid-18th C armies as they are: 4 coys of 8 figures, plus command element of 4 (one mounted). My ACW infantry are currently 24 rifle-armed, plus CO, flag and musician - 27 figs in all. There's nothing really to stop bringing the command into the main body, except that I don't have any spare command figures. A few units are smaller in both armies (21 figs usually), so variable-sized units aren't really a problem. I guess I just like them as they are and have been these thirty and more years...

Basically you go with how you feel. As the decision is still pending I'd probably lean towards the 'inny' system as yielding more units, but I a megalomaniac, more than likely...

The grenadiers are converged with those from other units.

I find Kinch's method of using supernumaries to mark unit status, losses etc. Blue bear Jeff has been know to use the position of an outie standard to indicate unit morale.

My 1/72 are all innies. Those of my 40's that are multibased have foot officers and ncos as innies on the appropriate flank and colours as innies in the center but drummers and mounted officers as outies.