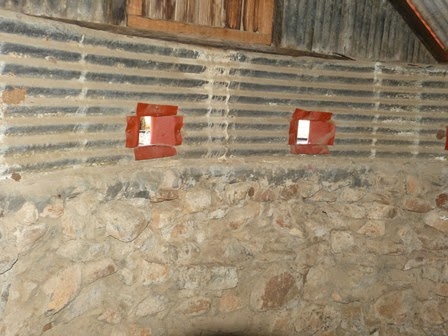 I played out the "Action!" scenario from the Grant book solo the weekend before last.

I had already made the bounce stick but decided I couldn't be bothered with it as anythin other than as a measuring device when push came to shove.

The rules I use are a bit of a hybrid beast that abstract the artillery fire somewhat (think "Charge!") and greatly simplify the over-complex (to say the least! Three pages in the quick reference version!) melee rules in the manner of TSaTF.

I really do like my rules on two pages of A4 at most.

You're all doubtless aware that each side gets two regiments of infantry, one of lights, a gun and a regiment of horse. My table is 7'x5' and there is not a lot of room for maneuver once you start plonking down those 50-figure units of Spencer Smiths.

On that note, I've nearly finished the infantry contingent for one of my Spencer Smith armies (the Empire) and wonder how on earth I'll ever fit the ten regiments of foot on the jolly table!
Posted by Bloggerator at 8:38 AM

Argh! That should read "good" in the previous post.

Sure you're not a robot. Did you know there's a machine out there now that can pass a Turing Test?

Pictures tonight if I have time!

Pictures! Your public demands them.

Well Mr Kinch, if it's my public, then there is no avaiding the heavy burden of responsibility, is there?

Now don't forget, those Grant units were not designed as 48 figures strong they were designed to be 12.5" wide and whatever you can cram into that is what you get. Pack 'em in.

Or maybe go 3 deep ala Protz and Alte Fritz.

Greg, the possible solutions are simple:

a) Buy or make a bigger table

b) Give all of your figures to me

Ross, it's interesting that you say that. My figures are on 8, 45mm frontage Renedra bases (six to a base) and are quite well-packed-in as they are. 360mm frontage for the battalion. 12.5" is something like 317mm. I agree this is a significant difference, but is it significant enough to crowd the table as these units do? Frankly I think Grant's 12.5" frontage is optimistic codswallop for the unit strength he's using.

Oh come sir. That's only 15mm per figure. Its hard to tell from your photos..... but surely they could nestle up. Grant's numbers only call for a 1/2" frontage even many of of 40mm troops can manage that. Well my Prince August and 4/5 poses of Scruby. I've gone with 15mm per 40mm figure merely to accomodate the occasional/clunker.

Remember, the real men would be touching shoulder to shoulder.

Still as you say the extra per unit is not that big and only represents a unit of some 700 or 800 men. The real problem is linear warfare. Why do you think so many Grant battle photos show units scurrying about in good napoleonic columns?