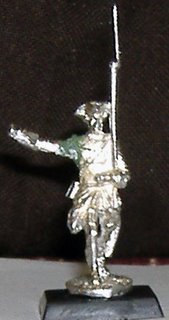 I thought that my "la Reine" Regiment needed some NCOs.

I hope this little essay will go some way toward filling what I think is rather a gap in the RSM range.

I took a marching private, cut off the "swinging" arm and re-pinned it in place, the top part - where the bicep would be for you and me - completely cut away. I then built up the shoulder with green stuff to make the coat look like it had raised up with the shoulder, then finally built up the arm around the wire that acts as an armature.

To me at least he looks like a marching NCO giving orders to preserve the alignment of a body of soldiery. I'll post a seperate picture of him when he's painted to give you a better idea of what he looks like when he's done.

In addition, I finished my two incomplete fusiliers and prepared another eight for painting.
Posted by Bloggerator at 9:53 PM

Forgive an ignorant question, but is the "green stuff" you use Squadron green putty or something else?

It's a two-part epoxy putty - the kind that comes in two components, one yellow and the other blue. You knead them together and when it's properly combined, it's green - hence the name.

I've not worked with it much, but I've already realised the need to keep the tools wet so it doesn't stick to them!