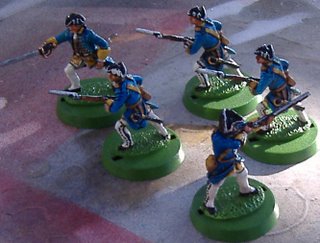 The Volontaires du Dauphnie were, according to my Osprey, raised at the end of the War of the Austrian Succession to retain the body of light infantry skills developed during that conflict. A mixed force of fusiliers and dragoons - later a company of grenadiers was added. They served with distinction throughout the Seven Years War. The Infantry uniform was as illustrated here. That of the Dragoons was similar although the cap was a blue bag with a fur turn-up, later replaced with a brass helmet. They also had the white laces on both sides of the coat, not just on the buttonholes as was the case with the fusiliers.

The upcoming "Arcadian Skirmish" has moved me to get on with these troops!
Posted by Bloggerator at 6:06 PM

Lovely figures! The light blue coats and "wheat" colored small clothes compliment each other nicely. And I see you've added white lace to the cuffs -- a very steady hand you've got there! Well done. What line of paints do you use?

Lovely little fellows they are. Seems almost a shame to cause them any disconfort, no?

Stokes - I'm glad you like them! The lace took some doing and is more of an impression than an accurate reproduction of the real thing. As for paints, I'm gradually shifting entirely over to Vallejo as i use up my stocks of GW paints.

Donald - I am sure I can look to them to provide for their own comfort, especially that officer who is of course the sybarite Voleur des Coeurs.