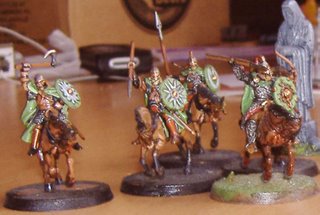 Riders and Warriors of Alzheim as depicted by the Alzheim Histoical Re-Enactment society (Keeping History Alive!).

There is some debate as to the veracity of the green cloaks, and some still question the absence of horns from the helms of the mounted men.

Most of the information we have from these, the dark ages of Alzheim are taken from the famous "Donau Tapestry" depicting the victory of Helm Eohorn over "Da Orkz" in the year dot. As is well known the tapestry now resides in the Louvre, having been looted by a revolutionary army en route to Italy in 1795.
Posted by Bloggerator at 2:49 PM

Really like the color pattern: would be very good for a (fictitious) SYW Légion d'Alzheim/ (von) Alzheim Freikorp! Think Prussian/ Hessian jägers, with darker buff for waist and trousers, lighter green greatcoat... Burgundy cuffs/ turnbacks, no lapels? De Saxe small 'roman' helmet, for the look of it? Well, I stop before rambling on the cut, livery lacing & colors of the musicians' coat...
Best regards,
Jean-Louis
(abdul666lw on some Yahoo groups)