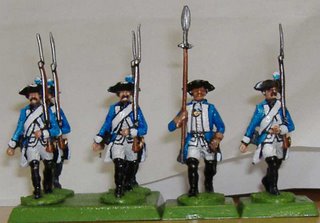 These are a handful of samples I painted as a test for mass producing the figures for the creation of Bavaria's Leib Regiment. Note that they have coats with white rather than black facings which, according to my copy of Pengel and Hurt, dates the regiment before 1760. Note also the lack of lace on the Officer's waistcoat - Bavaria had been thrice ravaged during the war of the Austrian Succession by Austrian light troops and it's economy had barely recovered by this date.

One wonders at the relationship between the Austrain and Bavarian troops during the Seven Years' War.

Posted by Bloggerator at 8:23 AM