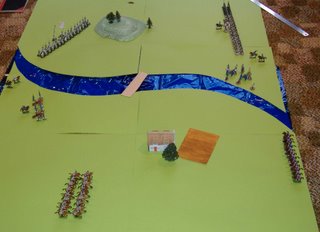 de Saxe orders a general advance, meaning to get his infantry into a secure position with it's flanks resting on an unfordable portion of the River Blast and the flanks of the Blasthof Berg. His guns move forward to cover the bridge. The Horse take a full move toward that of von Browne in hopes of trying conclusions with them.

von Browne is sensible of the threat posed his smaller cavalry by that of de Saxe and accordingly positions his artillery to fire at their flank as they close with his smaller frce of Dragoons. He is confident of the ability of his infantry to handle that of de SAxe and advances them on a broad front.
Posted by Bloggerator at 1:25 PM