The turn of the Tide? 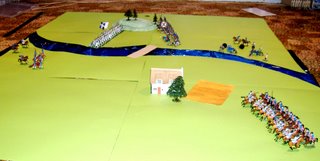 von Brownes Infantry make a last move. It is discovered much to their discomfort that the Blasthof Berg blocks line of sight. When the firing begins they'll be out of the fight!

de Saxes men, not having moved fire immediately and with effect, eight of the Itzenplitzers being rendered hors de combat. Things are looking brighter again for de Saxe.

von Browne likes not what he sees and deploys one of his guns to fire on de Saxes' infantry next move.

The other is trained on the cavalry but dares not fire for the melee that has erupted. In a mad flurry of dice rolling de Saxes' Cavalry inflict 5 casualties for the loss of two. This restores the numerical superiority they had at the outset.

His infantry have taken 20% casualties, half his gunners and half his cavalry are casualties also. de SAxes troops are reasonably intact apart from his cavalry who stand at about 70% of their strength and are far from being a spent force.
Posted by Bloggerator at 1:45 PM