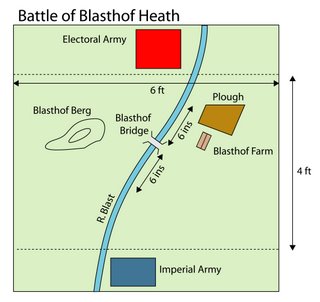 I fought out the battle of Blasthof this weekend as a solo game.

Von Browne commanded 40 Infantry, a dozen cavalry and a pair of guns.

de Saxe had 32 infantry, 16 cavalry and two guns of his own.

The battle was fought out on Blasthof Heath, the objective being that one side or the other be left in posession of the bridge over the River Blast.

The map has come down to us from the von Browne Collection. It may be seen that the electoral forces were to begin from the Northern end of the map while those of the Imperium under de Saxe were positioned at the Southern.
Posted by Bloggerator at 1:11 PM