Some thoughts on Cavalry in Melees

These are a first draft on how I think Cavalry melees might run and were prompted by a discussion running on the OSW Yahoo Group:

The melee itself is difficult.

Should Side 'B' be fleeing, I think Side 'A' should be allowed to overrun into them on the same move and then melee at a very great advantage.

Should Side 'B' stand to receive the charge, I think they should perhaps melee on even terms just because I can't imagine Side 'A' smashing headlong into them and I do feel they would come to a halt in the face of this steely resolve.

In the case of Sides 'A' and 'B' both charging hell-for-leather at each other,I'd throw a d6 for each figure, perhaps removing a casualty on a '6' to represent collisions. I'd also have them "pass through" each other to the maximum extent of their charge moves. As the figures interpenetrate, I'd like to come up with a means of representing them taking a wild cut at each other.Wounds might result, but 'kills' would be rare.

I'd want to make this last case (hell-for leather mutual charging) the least likely outcome, with perhaps the second case being the most likely, followed bythe first in order of probability.

In the case of the Infantry standing to receive the charge, I think there will be no melee, just a bunch of cavalry standing in front of the Infantry engaging in a musketry duel, at terrible disadvantage. If the Infantry run away, or aredisordered or are skirmishers in open order, the cavalry should be allowed tocontact them where they will melee against them at very great advantage.

I think the Infantry should be allowed a volley as the cavalry close, however.This however makes me wonder if the Cavalry might not have to test morale to close to hand-to-hand combat.

In the case of the infantry choosing to counter charge, well, my mind boggles abit here because I can't recall any historical examples, so I'm tempted to discount the option altogether. I'd be tempted to fold that possibility in withstanding to receive the charge.

The trick with all this is to see how it might fit into a "Move, Fire, Melee,Morale" turn framework, of course. It's at times like this I start thumbing through my copy of the Sword and the Flame for ideas to emulate!
Posted by Bloggerator at 5:24 PM No comments:

I painted 17 horses over the weekend. Here's how:

One additional point is that slightly thinned paint that flows evenly is preferable than thickish paint that covers well. I would much rather give an area an extra coat than have my paint blob or cover a detail I was trying to paint. Make your paint about the consistency of milk and you can't go too far wrong. 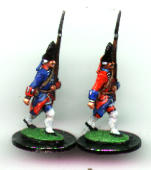 Another couple of samples.
Posted by Bloggerator at 9:15 PM No comments:

This is a taste of what my newly-finished regiment looks like.
Posted by Bloggerator at 9:13 PM No comments: 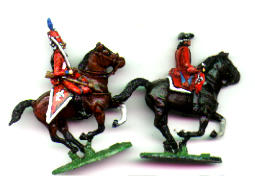 Nothing new here - just a better picture to atone for my lousy digital photograpy.
Posted by Bloggerator at 5:24 PM No comments:

Today should see me just about finishing off a new unit, the regiment Guyenne.

This morning I put the finishing touches on the second last tranche of figures, and I intend to do the last lot tonight.

Flags are by Warflag, correctly-sized, freshly-printed and ready to be mounted on their brass wire flag staffs.

I'm in the golden glow stage at the moment and am really looking forward to just lining them up on my painting-table at home and seeing how they look with their comrades all in formation with them!

For a change of pace, I am going to do a regiment of cavalry. I paint horses fairly quickly, so the work should progress quite well.
Posted by Bloggerator at 12:40 PM No comments:

With my French I paint pretty simply.

I take the largest single area of colour (WHITE!) and do the whole figure over in a slightly darker version of it. This involves adding about 5% of a pale brown to my white and just making sure the whole figure is thoroughly covered.

Once dry, I lightly load a brush with pure white and brush roughly down the whole length of the figure working from top to bottom. This has the effect of putting the lightest "colour" on top of the figure while leaving the recessed areas darker.

Now I do all the other bits of colour - facings, flesh, hats, hair, belts, boots, buckles and braces.

Flesh areas get a thin wash of brown ink followed by a highlighting of a paler shade of flesh.

Hair, which has been painted over in black gets touched in with white to represent powdered locks. The lower lip might get a tiny dash of red ink. The occasional moustache might get a couple of dashes of white over the black base to denote a veteran.

All other colours are left unhighlighted.

Lastly, I slightly thin some white to a milky consistency and use it to paint areas like the tops of shoulders to finish the highlighting. This is also a good opportunity to cover up the inevitable mistakes I make when applying all the other colours.

For a figure with a different main colour (say the Gardes Suisses with their red coats), I do a base coat in the main colour, wash that over with my sepia brown ink. Wait for a few hours while that dries and then heavily "wet'brush" it with the main colour again to restore the brightness.

This is how the Gardes Suisses test figures further down this page were painted.
Posted by Bloggerator at 1:55 PM No comments:

What's on the Workbench 2

I should also mention, that after the recent acquisition of a couple of bags of cavalry, that one thing I am going doing is getting cracking on the Gendarmerie de France.

My other bag will become either the Wurtemburg or Nassau-Saarbruck regiment.

At some stage in the (near) future, I would like to do the Conde regiment.
Posted by Bloggerator at 8:24 PM No comments:

What's on the Workbench?

To ask the question is to provide the answer - quite a bit!

Work goes well on Regiment Bearn - it ought to be finished by this time next week. I'll follow up with a post on how I have been painting my French regiments.

As you all could see from earlier posts, I have finished off the first squadron of the Turpin Hussar Regiment. I had originally thought that I might do the Royal Nassau Regiment, but it turned out I had better sources for Turpins'.

I have figures on order to make a second squadron. By the time this regiment has been pieced together, it will have been done with 10 Prussian Hussars in Mirliton (the troopers), one French Trumpeter and an Austrian Hussar in Busby (representing the CO). It's a pity the trooper figures aren't a little more animated, but there you go!

I reward myself when I am painting a big batch of figures by letting myself paint a handful of more colourful or just "different" troops. For being good and painting up Regiment Bearn, I am letting myself repaint two RSM marching Lorraine Grenadiers (almost the first figures I ever seriously "tried" to paint) as being from the Gardes Suisses and Gardes Francaises. I will post some images when they are done. I hope that they don't raise the bar too high for the rest of their units. Those test figures always seem to get that little bit of extra-loving-care.

My Saxons are still plodding along - two or three figures at a time. I must extract my finger and make a concerted effort on one of the Regiments. I've discovered that the RSM Austrian Freikorps Lacy figure would make a pretty passable von Rochow Fusilier, so there's another project for my Saxon Army - especially considering that there is a Prussian Infantry Officer without lapels who could lead them.

Beyond this, I am expecting a pretty substantial re-inforcement in the form of more RSMs I was fortunate to acquire in a trade. They'll let me add another two or three French regiments and put me in a position to start thinking about which Bavarian and which Hungarian Regiments I might like to go to work on. I like the idea of allying the Bavarians up with the french, it's like the War of the Spanish Succession all over again. It might be fun to put on a scenario with them recreating the storming of the Schellenburg!

I think that'll keep me until Chrismas. 2006.
Posted by Bloggerator at 5:52 PM No comments: 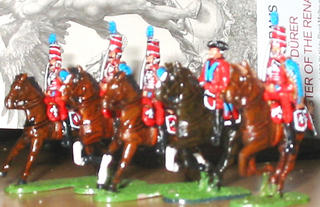 I've just finished painting these Hussars from the Turpin Regiment. Figures are RSM. I'll need to buy the Austrian Hussar in the fur Busby to represent an Officer.
Posted by Bloggerator at 7:19 PM 2 comments:

I've just joined MagWeb and was very interested to read a number of articles on the armies of the Eighteenth Century Italian States, in particular one on the Papal Army of about 1708/1709.

I posted a query on the various Yahoo Groups dealing with the Eighteenth Century that I'm a member of looking for information on the Papal Army of the 1740s and 1750s - this being more my period - and have had a number of replies, one from a gentleman offering to post me some of the materials he's gathered over the years.

I think doing a brigade from the Papal Army - and maybe one from Genoa or Sicily might make for an interesting diversion. Watch this space; with my correspondents' permission, I'll put some of his information up here.
Posted by Bloggerator at 6:55 PM No comments: