I never thought this would happen, but I have three regiments of Spencer Smith Cavalry surplus to requirements.

They are on the Charles Grant organisation, each being 24 troopers and four officers strong.

Otherwise, we can talk cash. Yum.

If there's no interest, off they go to eBay or Bartertown.
Posted by Bloggerator at 7:50 PM 3 comments: 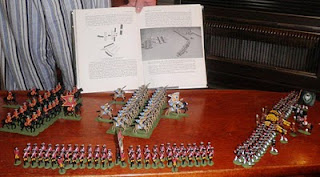 Well, here are some of the new lads, re-enacting one of my favourite images from The Wargame. As you will doubtless recall, Charles Grant threw away two light cavalry regiments to no real purpose during the Mollwitz game! As you will likewise recall, the Butyrsky Regiment was able to wheel and deliver fire against the flank of the "Austrian" brigade of light cavalry.

In my little mise-en-scene the actors are, from the left, the Marchmont Dragoons who are veterans already of the 2006 Sittangbad game; to their right and preceeding them into the witches' cauldron are the Esterhazy Hussars (whom I believe are originally from the Asquith collection). The Infantry playing the part of Butyrsky are the Battenburg regiment, whilst those which are about to receive the enemy at the point of their bayonets are the Leibgarde Grenadiers. These regiments are also, I believe, from the Asquith collection as re-painted by Mr Olley.

I am rather fond of the bright yellow carriages of the guns and they will immediately find their way into the Imperial Army, as will the Esterhazy Hussars. Likewise the Battenburgers, perhaps re-cast as a Swiss Guard regiment. Considering that the Alzheim cavalry has always clad it's dragoons in red (and indeed, I have another pair of red coated dragoon Regiments courtesy of the lovely Gary C) it will come as no surprise the Marchmont Dragoons* will be joining the Alzheim Service.

I feel that the Leibgrenadier Garde will also go to Alzheim, but they will probably have to accept that they will be wearing the pale blue coat of the Alzheim infantry if they expect to adopt the proud designation IR#1.

The Pyjama-trousered legs are my own, and very fine they are indeed.

More pictures tomorrow. Probably not including my Pyjamas.

*or shall they now be the Marchmont Dragoner?
Posted by Bloggerator at 9:50 PM 1 comment:

Events have moved on rather here at the jolly old Duchy of Alzheim.

I was pleased (OK, delighted!) to take delivery of a huge box containing Phil Olley's Spencer Smith collection. Phil had contacted me a few weeks back asking if I was interested in purchasing part or all of it.

I hesitated for a microsecond or two then emailed him back saying YES PLEASE!!!

So here they are. I spent most of yesterday evening and part of this morning to unpack them - I still have more bubble-wrap to peel off - and they are splendid. Three fine regiments of Infantry and three more of Cavalry and a fine battery of guns as well as sundry independent companies and a unit of light infantry.

So, thanks again Phil and I will be posting photos tonight when I get the chance.
Posted by Bloggerator at 8:01 AM 5 comments:

What's tickling me at the moment

You will all have had this happen to you at some time, I'm sure.

You are working away at what is going to be THE project for the next two years; you've spent huge amounts of money. You know how it goes.

Then you start noticing things.

I'm just hopeless, really.
Posted by Bloggerator at 10:21 AM 2 comments:

Labels: It's all about me.

I got up at 05:00 this morning filled with a burning determination to win an eBay auction.

Well, win it I did, although not without a degree of buyers' regret.

On the bright side, this purchase will get me to the point where we can start having battles. This is a good thing. The infantry alone represent about 7 regiments worth of figures, so some progress can again be made.

The cavalry may be a bit surplus (except for the hussars), so I may sell some of them on to pay for further bits later on.
Posted by Bloggerator at 8:53 AM 5 comments: 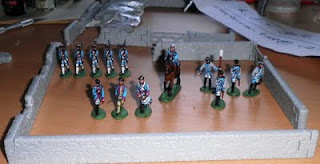 Bit of a painting challenge on at the moment.

I'm pushing to product 120 Olley-points by November the fifth.

An infantryman is an Olley-point, a gun or a cavalryman are two.

UPDATE - The mounted officer is in fact Maximilian von Browne, one of Alzheim's finer Generals.
Posted by Bloggerator at 8:50 AM 1 comment: 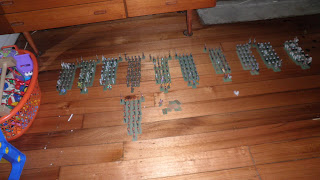 Forgive the very rough nature of these pictures. We got home from a day-and-a-night away in Castlemaine to find a big old cardboard box on the doorstep. I knew immediately what it was. I had to wait until dinner had been eaten and the children put to bed before I could open it though. 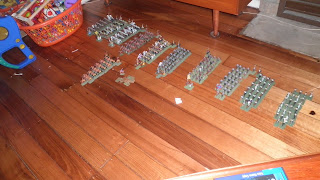 These are 11 regiments of Spencer Smith cavalry, three are painted as cuirassiers and the rest as Dragoons and other Chevaux-legere, very kindly donated by a US reader, Mr Gary C_. 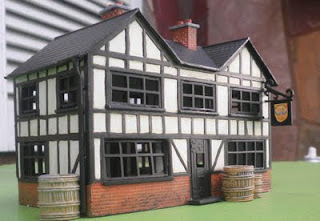 A little place I visit sometimes. 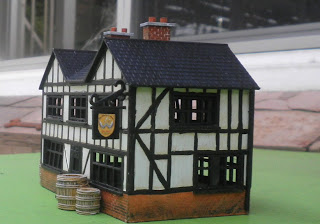 Building by Dapol, barrels by Rendra.
Posted by Bloggerator at 6:38 PM 7 comments: