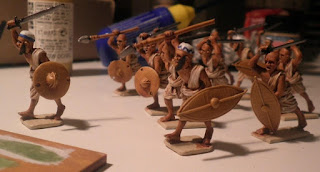 I painted up a dozen Castaway Arts Mahdists last night and this morning using the same techniques as with the Perry ones in my previous post. 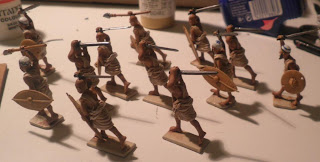 These are some of the earliest figures in the range, and I have come to really appreciate how well-researched they are. If anything they were easier to paint than the Perrys -  although that may be because I now have the style of painting worked out... certainly they were easier to stick together!
Posted by Bloggerator at 6:39 AM 2 comments:

I have just assembled and painted my first batch of 20 Perry Miniatures Mahdists. From start to finish they probably took about 3 and a half hours to do over a few days using speed-painting techniques.

These are pretty nice miniatures that assemble quite easily. A little careful positioning and most of the joins where the plastic arms meet the plastic shoulders, especially if you let a little of the glue squidge out to act as filler.

Opening the box it's apparrent that they have tried to do quite a lot with the miniatures. They are trying to give you the option of early and later Beja, Kordofani and Nile Arabs and even the early Ansar. In my opinion they have tried to cover a few too many bases with the one set. However, you can do worse than build them up as as your Kordofani Rebels or Nile Arabs. Perhaps as early Beja, although to my eye, some of them will be a little too well-dressed as the latter.

That being said, they suit my purposes admirably and will be please to field a horde of 2-300 of them. They respond well to my speed painting. This involves being undercoated with a can of the Army Painter Skeleton Bone coloured rattle-can paint. I then damp-brush highlight this up to some thing approaching white, not being at all careful with the brush. Then I wash the flesh areas with a mix of heavily watered yellow-brown that I call "Arab Skin". Spearchafts and rifles get a thinnish coat of yellow ochre. When all that's dry, everything (and I mean everything) gets a wash of gryphonne sepia. Then the metal bits get a coat of black, then blades get a quick wipe with boltgun metal.

Persnickety details get done, mostly in brown and brass. Then with a fairly dry brush, I go over the lot and brighten up some of the whites.

Gloss varnish and the job's a good 'un.
Posted by Bloggerator at 8:37 AM 1 comment: