Meant as an accompaniment to their recent "Robin Hood" releases are Spencer Smiths new Normans.

So far they have released a half-dozen cavalry, numerous armoured infantry and a couple of unarmoured bowmen. I bought four cavalry for the purposes of this review.

All are in the classic Norman war-gear of knee-length, short-sleeved byrnie and conical helm with nasal. The figures are 30mm - just the same as the Franco-Prussian War French I own which are also from the greater "Classic" range. The figures are multi-part insofar as both arms need to be glued to the body. To this end they are provided with a substantial pin-and-hole arrangement. The arms are poseable and completely interchangeable with those of other figures in the range. One could use some of the spear being thrust overarm limbs from the infantry to vary the cavalry even further.

Indeed, this latter point is the reason there are so very many variants of the infantry at least. there is not a body dolly (of which there seem to be only four) that has not had each arm swapped for it's alternate to make up the plethora of codes available. The cavalry are in the same boat with only two or three body poses that are used to make up the five available codes.

So, what are the pros and cons? 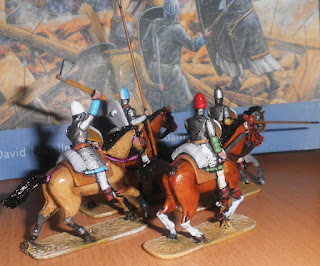 I'll start with the cons. I'm honestly not sure on how I feel about the two seperate arms. It seems that a design decision was made for economic rather than aesthetic reasons so as to maximise the number of figure variations that could be got off a limited number of body dollies. I experienced a fair amount of frustration in getting the arms into the poses I wanted as the fit of the pegs in the requisite holes was loose and getting the limb to stay still was tricky whilst the glue set. I am sure that cleverer people than I will use a superglue accelerator or even one of the gel variants of cyanoacrylate adhesive. I'm not entirely happy how the joint looks when the arms are glued on. 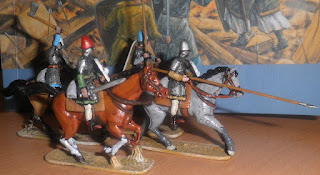 Moving onto the pros, the figures and horses are exquisitely well-proportioned. Their hands and weapons are normally sized. A design feature that I like especially with these figures is that detail has been kept to the minimum. The figures look like Normans (or Crusaders or...) without having to be lugging around an apothecary's workshop of superfluous detail that will never be noticed on the wargames table anyway. Thus they are quick to paint - a personal plus. The chainmail is very subdued and this will either turn people on or off depending on how they prefer to paint this sort of item. The folds of the mail are very nice but the "rows of dots" that are the generally accepted sculpting shorthand for mail are replaced by a light pebbling which to my mind might best be painted with a dark metallic coat overall (Boltgun metal as was) and a quick drybrush of something brighter - Chainmail perhaps?

Recommended. Mine will be scaling the walls of Jerusalem sometime soon.

UPDATE: For Ross - a comparison shot with my Willie "Saracens for all the Ages (qv!)"

Shewing a method for ye Construction of ye Fortificationes.

Moslem and Christian assail each other. It was always thus between the two. So the culture warriors tell us, anyway.

Oh, for a Kingom of Heaven. Especially one with Eva Green in it. Ahem. 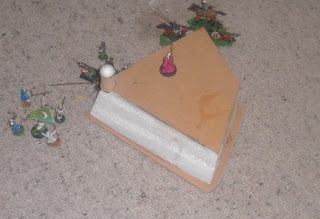 Posted by Bloggerator at 8:11 AM No comments: