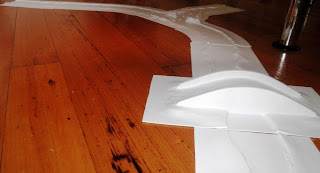 Just a few bits and bobs today. As you can see from the picture above, I've taken delivery of some Amera vac-formed terrain. In my case, five straight and two curved sections as well as a nice little bridge and a forked section. They all butt up neatly against each other so, so far so good. All the work will be in the painting I'd think, so I'll see how I go. I've probably got something like two metres of river - surely enough?

Side-note - I wonder how they'd paint as roads? 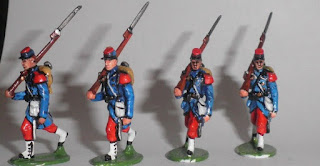 In painting news, I'e finished glossing the heck out of these Spencer Smith "Classic" Franco-Prussian War French. The coats are a bit darker in reality - blame the flash photographer! I have decided to paint the rifle-toting arms seperately before fixing them to the torso in future. 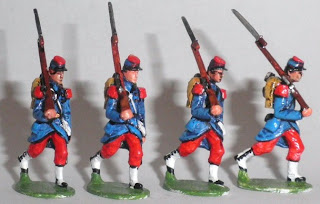 Apart from that they were lovely to paint - surprisinly unencumbered by extraneous detail and a nice subject. I used a semi-washed style with these on a white undercoat again, but was unable to resist doing some highlighting. Some habits are very hard to break. I felt the black lining worked quite well to firm up the definition of the figure.
Posted by Bloggerator at 6:15 PM 1 comment:

The Demise of the Jaeger

Caught in the open, a company of ineptly led Stollen Jaeger was caught by our brave hussars and slaughtered almost to a man and, we are glad to report, without suffering a single loss in reply.

The lone survivor was last seen scuttling back to the Village of Eispicke. Little safety there, however as our brave Artillery reportedly caused a couple of casualties among those Stollens who chose to cower within.

Not for nothing is Stollen known as "A Piece of Cake".
Posted by Bloggerator at 7:22 AM 2 comments:

With basecoat and acrylic wash... 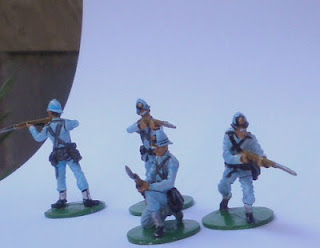 I'm quite pleased with them the unifors are nice and bright and the black equipment makes for a strong contrast. 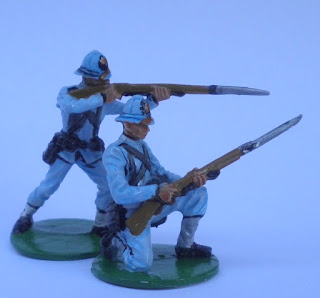 French Marines defending the Legation from "Boxers, mon Capitaine, 'ordes of zem!"
Posted by Bloggerator at 7:58 AM 2 comments:

Or, A Day At Sittangbad

Stokes - do not read the following. Otherwise I will creep into your house at 2 AM and re-arrange your troops to my advantage.

General de Latte sipped his favoured coffee with hot milk and surveyed the sketch map one of his disgracefully sweaty roaming aides had slapped with grubby hands onto his portable campaign table. Mistress Ophelia* stirred resentfully among the disordered sheets and bolsters of his campaign four-post bed and mumbled something about the annoying cannon fire.

Ignoring her he smoothed the paper and glared at it in his best military fashion.

I can either launch the Hussars into von Tschatschke's**  gunners before he can deploy to fire, OR thow them into the flank of those Leib Grenadiers. I could take the light company of the Mittau infantry, put them in open order and discomfort the gunners anyway whilst throwing the remainder of them at the Leib Grenadiers after they have been disordered by the cavalry melee.

Or, radical thought, send them through the gunners, and have them make for the bridge. The rest of the army could pin the Stollens frontally. Mittau could follow in support.

And what of O'Malley's Irish Grenze? A target-rich environment for them, as they say. At the least they could cause the enemy cavalry casualties. At best, who knows? Once all the Zichenauer Infantry get stuck in, we could in potential see a double-envelopment of the Stollen main force.

Note to self - must preserve sufficient force to break into Sittangbad proper.

*More of her anon.
** How on Earth do you pronounce that name? Shats-key? Germans, eh?
Posted by Bloggerator at 8:04 AM 3 comments: 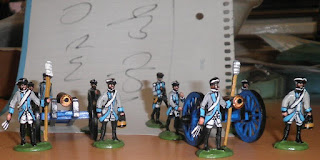 Artyillery has always been a bit neglected in  my armies. I can't explain why. I like cannons. They're good. I like painting them - I have a large collection. I think it's because I don't really like painting gunners. Easy enough to see why as the Spencer Smith gunner is easily the most misbegotten, flat, flash-encrusted, two-dimensional creature ever to roam a war games table.And why is the bloke with the rammer carrying a hanky? Anwer me that! 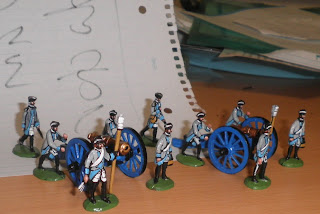 Still, I was pleased with how the guns came up. They are Battery 'C' (Howizers) of the Royal, Loyal and Efficient Train of Alzheimer Artilery. I will now embark (cursing no doubt) upon Battery 'B'.

Now, in other news, the recent sad attempts of certain bloggers to drum up interest in their paltry blogs* has made me do a little counting and I have realised that, with another couple of gun crews and some infantry subbing for engineers/ponooniers that perhaps I might just be able to put on something similar. Perhaps this weekend. I may need to use the odd house brick instead of some bulildings, though. How Old School is that? 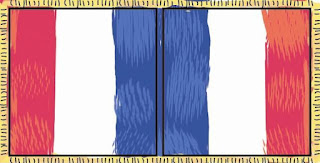 I thought it might be nice to have a more generic "French" flag for my French Marines to bear whilst defending the Legations in Peking.

Amy stripped the detail out of the FPW flag for me.
Posted by Bloggerator at 7:57 AM 1 comment:

I'm currently building a small force for French for a Franco-Prussian War demo game at CanCon in January of 2013 and was casting around for some flags for the two Infantry Regiments (times three batalions each) which are to be my contribution.

I'd just about decided on these from Warflag:

which are a very nice offering. Then I found myself remembering these from the Vintage Wargaming blog:

I turned to Amy, source of many of my flags, and asked her to re-do the former in the style of the latter.

She's good, my missus is. 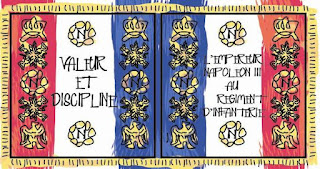 Posted by Bloggerator at 7:49 AM 3 comments: