And here we are, the end of another year.

Shall we look back and forward?

Strangely, and despite the heroic amounts of painting I have managed over the past year, I still find myself curiously in much the same place!

January - There was a big boom in Spencer Smith painting.
February - Stokes and I began the refight of Sittangbad and I had a bit of a fiddle-faddle about with the Franco-Prussian War. I did manage to paint up some British infantry as French for the big "55 Days at Peking" game.
March - A little terrain making - a marsh and a collection of ponds.
April - A Painting Challenge sort of completed and a sudden interest in Little Wars poked it's head up unexpectedly. Amy made me a very nice infantry flag for my FPW French.
May - Spencer Smith Normans? Duly purchased, painted and put away. Crusades itch scratched - for now. The 1565 project gives one last spastic kick in the form of a large Ravelin.
June - The smaller test-run of the "55 Days" game in Canberra. A smashing success.
July - My shameful failure to paint more Spencer Smith miniatures for a painting Challenge and instead producing a nice little force of Mirliton Italians, a few DAK and some unaccountable Myceneans.
August - The opera bouffe of Bergonzoli's caravan. If you don't remember, well, shame on you. Well-hung libyans and Italian Heavy Artillery, too!
September - Back to the Sudan. Many Egyptians painted, the Glen Moray on the stocks, Hussars, Highlanders. Single Malt. Will it last?
October - Allahu ackbar! Mahdists! Scores of 'em!!
November - Sudan Terrain, Gordon on his last legs... What's that? I have to construct four small and one large building complex by when? OK! And while i'm at it - ancients!
December - Hey, look at these Macedonians!

I managed to get the buildings done and handed them over you'll be relieved to note.

Now the demands of terrain building are off me, I can return to the Sudan. Still going strong there and the next 20 Mahdists have been clipped from the frame. if we are going to demo a Sudan game next year, I'll continue to build heaps of them, otherwise I will taper off in March and concentrate on my own campaign.

There you go, a sort of pledge for next year.

Another - The Alzheim and Imperial armies are now at very fightable strengths in terms of the "Grantian" sized armies I had envisaged. I will be fighting battles with them next year. I will. Just a touch of basing to be done and we ought to be right to go.

I want to keep on with my WW2 Italians. Before I go to much further, i either need to find someone locally who'll provide an opponent or build British forces of my own to solo against.

That ought to keep me.

From the Back of the Cupboard 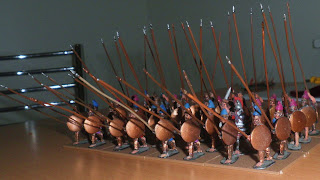 Almost literally true in this case. 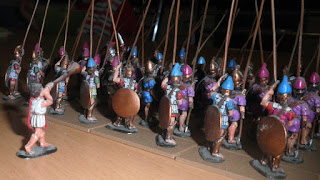 Ii was having a clean-up today and re-discovered 60-off painted Eureka Macedonian Phalanx which I purchased and painted in a mad frenzy of enthusiasm when they first became available. Then I carefully read Arrian and decided Alexander was not really to my taste after all and that I didn't really like the figures and... well... just abandoned them. 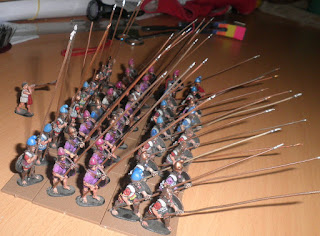 Of course, now I think they'll go splendidly with a Successor army and am relieved I never eBayed them off. They are closer to true 25s which fits well my current concept for an ancients army, are not too badly painted and just need to be dusted and based.

I also found some Elite Republican Romans. Now I'm thinking of Pydna. Or Pyrrhus* of Epirus. Naturally I'll have to replace the Elites with Mirliton as they'll scale better together.

See how my mind works?

*Now, there was a man who lacked focus!
Posted by Bloggerator at 10:07 PM No comments: