I'm going to take a week off painting RSM minis as I was given by madame and the kids a couple of packs of the re-engineered Tradition "Willie" Gardes Francaises for my birthday last Sunday. They look rather nice and will go well with the couple of the older Suren officers I painted up a few years back.

As to the Prussians, I have four units of Foot and three of Horse with another three units worth of foot on the blocks in the form of unpainted castings and another of Horse to be getting on with. After them, I'd rather like to do one more of foot and horse each. The former preferably as one of the Grenadier Battalions of IR 15. I mean, if you can't paint the Garde, then what's the point of toy soldiers then, eh? That ought to get the Prussiand up to a state where they can reliably match it against my French armies - eight battalions and seven squadrons once everything is all based up.

This Fusilier Regiment was created on July 28 1755 from Garrison Regiment XIII stationed at Minden, which had been raised in 1743, and from Wied Fusiliers. Furthermore, Dossow Fusiliers, Jungkenn Müntzer Fusiliers and Garrison Regiment IX contributed another 360 men. The new regiment also received the "old" uniforms of Wied Fusiliers. The regiment had no district to levy its troops and had to rely on recruitment.
In August 1755, the new fusilier regiment was transferred to Wesel where it replaced Wied Fusiliers while the latter took post at Minden. On May 31 1756, the Hereditary Prince Friedrich of Hesse-Cassel took command of the new regiment.
During the Seven Years' War, the regiment was under the command of:


Service Record
In 1756, the regiment garrisoned Wesel.
In 1757, the regiment formed part of the Prussian contingent which joined the Allied Army. On March 24, the regiment marched to Bielefeld. In mid June, it took part in a minor engagement against the French near Bielefeld. The Allied Army vainly tried to prevent the French invasion of Hanover. The regiment then retreated towards Magdeburg.
In 1758, the regiment initially served in Saxony under Prince Henry. During the Autumn, it joined Wedell in his campaign in Pomerania against the Swedes. However, the regiment was soon recalled to Saxony to defend Dresden.
In 1759, the regiment began the campaign with Prince Henri in Saxony. On May 23, it took part in an engagement against Austrian light troops at Aue. On August 6, during the Austro-Imperial invasion of Saxony, the first battalion capitulated at Leipzig but was allowed to retire freely. On August 20, part of the regiment was part of the garrison of Wittenberg who surrendered and retired to Potsdam. The second battalion took part in the defence of Dresden which surrendered on September 4. The defender were allowed to retire freely from the town and the second battalion joined Finck's Corps. Meanwhile, on September 8, the 1st battalion of the regiment took part in the Combat of Zinna where it was deployed on the left wing. It was at the recapture of Torgau.
In July 1760, the regiment took part in the unsuccessful attempt to recapture of Dresden. On August 20, it fought at the Combat of Strehla before retiring towards Torgau.
In 1761, the regiment served on the Mulde under Prince Henri.
In 1762, the regiment served in southern Saxony. On October 15, Syburg detached the regiment to get hold of the heights of Erbisdorf before Campitelli but it was surrounded and captured as soon as it debouched from the village.
N.B.: The grenadier company, which originated from the Garrison Regiment XIII, never joined the regiment and kept its former uniform until 1776. This company was converged with grenadiers from Dossow Fusiliers (2 coys) and Garrison Regiment IX (1 coy) to form the Nr. II. "Standing" Grenadier Battalion
Posted by Bloggerator at 6:28 PM 7 comments:

I polished off the last little steps of this project this morning - green bases and a good coating of gloss varnish.

I'm pretty satisfied with the look of the regiment so far and will now noodle away at a few grenadiers for them then finally some command in the shape of a few standards, some drummers and a colonel.

I think I spied some fusilieers in the pile, so perhaps they may be next.
Posted by Bloggerator at 10:42 AM 9 comments:

Again a poor photo for which I apologise.

Sessions five and six saw all the black bits painted - hats, cartridge boxes and gaiters. A little toucching up was done on the white cross belts.

Then some black-brown for the muskets, , then some yellow-white-red for the pom-poms, more red for the neck-stocks. metallics on (sword-hilt, cardtridge box plate and mustket battel and bayonette and we were pretty well done. I'll do the bases in green tonight and then gloss the living daylights out of them before sitting back and waiting for my next batch of Renedra 45*40mm placcy bases. Lovely.

The eagle-eyed among you will note that I have made a belayted start on the Regiment's grenadiers. Well done you! A day or do more and I'll have them done along with the command types ans we'll have them done by my birthday this Sunday.

A very satisfactory state of affairs.

Now, on a completely unrelated note, I was reading Charge! on the bus yesterday morning as I made my liesurely way to work and noted the following passage quoted by Young and Lawford from one Captain Nolan:

"In the retreat of our army from Burgos (in the Peninsular War) three squadrons of French chasseurs charged some squadrons of our rearguard; one of these advanced to meet them; both lines pulled up and stood fast, until one Frenchman made a cut at the man opposite him, upon which both lines instantly plunged forward and engaged; the Colonel of the chasseurs was killed, most of his officers wounded and the French were driven back with heavy loss."

It is interesting how like accounts of tribal warfare this sounds. How tentative the confrontation is to begin with.

How unlikely it is that masses of horsemen will go crashing into each other.

Posted by Bloggerator at 8:33 AM 5 comments:

All blue coats and white belts now painted. You might be able to spy a few with their hats and gaiters painted in the background.

On we go. More black planned for this evening.

Posted by Bloggerator at 6:10 AM 4 comments:

At the end of the second session the hair and red coat-tails are all complete. I can still afford to be a bit imprecise at this stage as any mistakes will be covered up in later painting stages.

The red coat-tails require an fair amount of concentration due to thenumber of folds and re-entrants in the material.

In the third painting session I will paint the dark blue coats and perhaps finish up with a coat of matt varnish to protect the fairly delicate painted surfaces from any handling they may suffer. In the fourth session I'll be painting the white belt that supports the cartridge box and the white waistbelt. I will not be washing the colour on at this stage as I will be looking for good coverage at this stage of the painting process.

Posted by Bloggerator at 3:18 PM 4 comments: 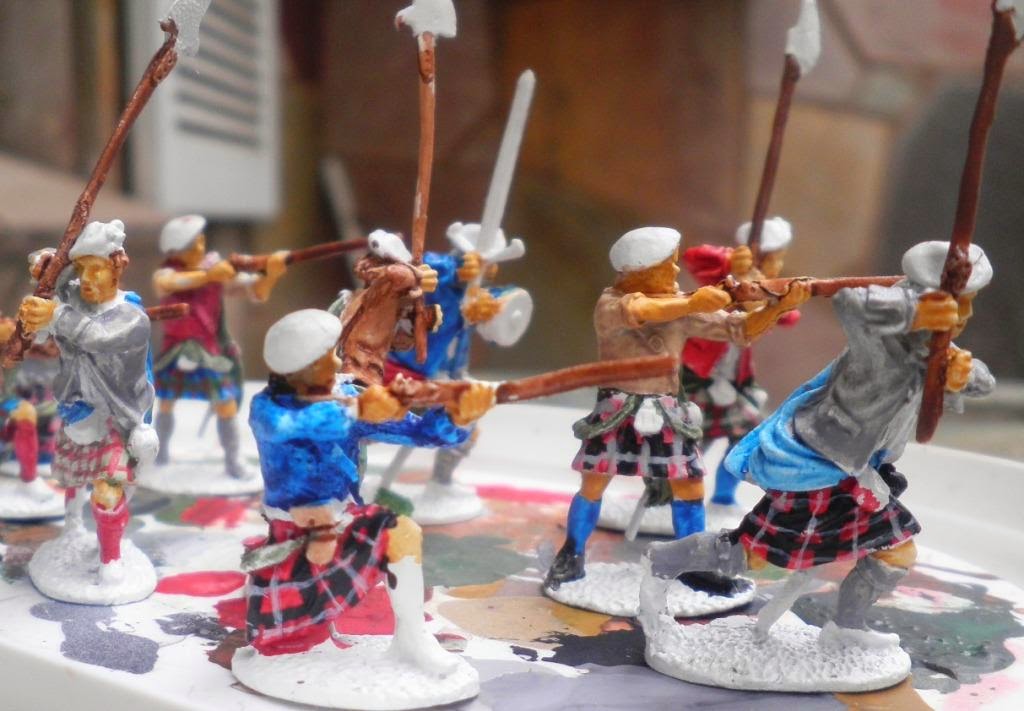 Here is the progress so far. Painting tartan is actually relatively easy, especially if you're just making it up. I've gone for fairly high-contrast designs as you can see. 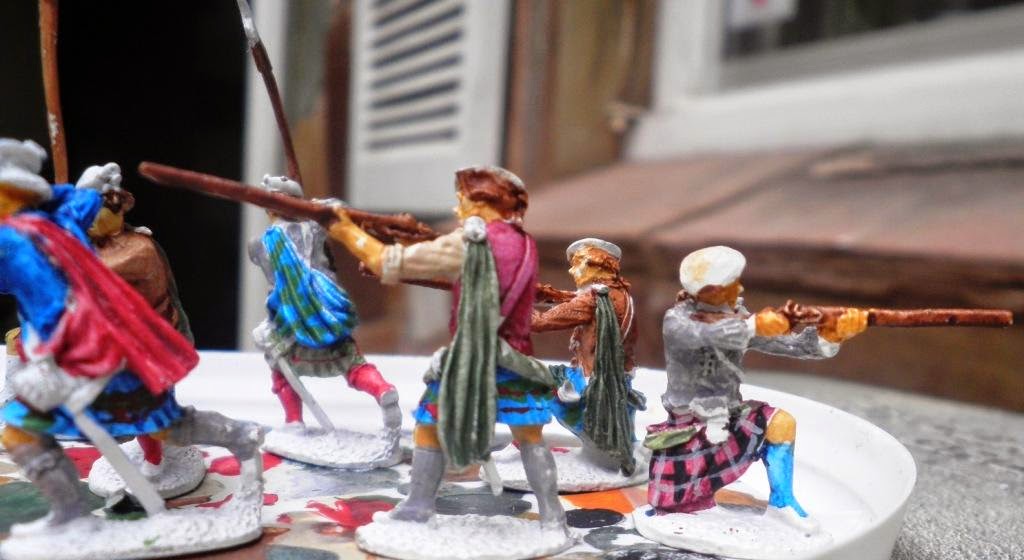 The hard part. The really hard part is painting the lines on the heavily draped and folded pieces of cloth* that depend from the shoulder or are rucked up around the waist.

*Nomenclature fail.
Posted by Bloggerator at 11:59 AM 6 comments:

As you may surmise, I have decided to paint the unit as Infanterie-Regiment Nr 5 (Alt-Braunschweig), with straw coloured small-clothes and facings.

The first session went quite well with well thinned coats of flesh-tone and yellow-ochre going on nicely over my matt white undercoat.

Next time around it will be the red coat-tails and hair. Thrilling, eh?

Posted by Bloggerator at 9:36 AM 4 comments:

Back to Ones Roots

I've been footling about the past couple of weeks doing anything but paint miniatures. The paintung funk is on me and I just can't bring myself to do anything much with toy soldiers.  Plastic kits are another thing and i've had a bit of fun painting an Airfix Spitfre and a couple of Emhar Whippets.

In this midst of these frolics, I noticed that I've been running this blog for about nine and a half years. The anniversary falls in August. Co-incidentally, poking around in the various plastic tubs that house my many collections of toy soldiery, I see that over that time I have actually painted quite a few large-ish units of RSM Seven Years' War figures which i have been re-basing to my newish 36-figure standard.

I appear to have enough infantry at least to do Sittangbad over twice. So, perhaps I ought to play the game.

I am tinkering with rules and am waiting on some bases from Renedra, so once those two elements are in, I think we might go forth.

While I wait, I may as well try returning to my roots and thin the RSM lead pile a bit. These are Prussians. I'm thinking of a red-faced unit with straw-coloured smallclothes.

Posted by Bloggerator at 9:19 PM No comments: