Whilst waiting on certain figures to arrive, I often find myself doodling, as it were, with the paintbrush. Like most other hobbyists, I have a large pile of unpainted lead, sometimes certain items within are - er - years old.

So it was with these Stadden  French Napoleonic figures. Some were from an eBay purchase of a mixed lot, others were from a hare-brained scheme to do the first regiment of Grenadiers of the Guard as a Charge! style unit. 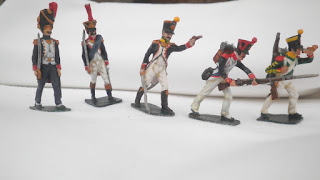 This is starting to look like a series of posts on the classics of wargame figure design of the past sixty years or so.
Posted by Bloggerator at 8:30 AM 5 comments: