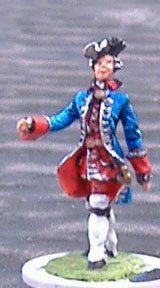 Just to show you the Gardes Francaises are not wholly asleep and continue slowly to be added to!

I've some few Surens I'm wanting to use up, and what better regiment of foot to use them up on - the rank and file are RSM while the officers and NCOs will be these fine felows. One of my earliest posts shows another couple of officers whose coats need re-painting in this chap's manner.

Posted by Bloggerator at 6:01 PM No comments: 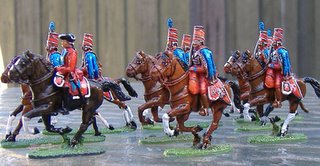 The Turpin Hussars are now getting along nicely - at half strength now, and slowly increasing.
Posted by Bloggerator at 5:58 PM No comments: 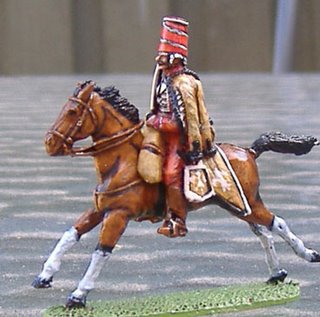 Just a little test figure for the first of a French (err, the Grand High Supreme Duchy of Soubre-Whelm) Light Corps to counter that of the shifty von Kleist. Looks like he's crossing a frozen lake (un lac glacee? Probably not..!). Now that's a piece of useful wargames terrain!

A few thoughts on building Hussar Regiments and Light Corps

I'm cleaning up the first few castings of the box of RSM Hussars I received from DPC in the US the other day. They are really nice. The castings are very clean, very crisp, almost flash free and with only a few points on them from casting vent channels.

Their designer, the late Steve Hezzlewood was a giant among sculptors and I wish that other manufactuers would take many leaves from his book. Preferably, they might just take the whole book!

These are the Prussian Hussars in the Mirliton with an additional Austrian one in the fur Busby/Colpak to serve as an officer (according to my references the Turpin Hussars' Officers were so attired). I've a Line Trumpeter in tricorne and the coat with the hanging sleeves as the musician - his uniform is reasonably accurate as to my sources. I've no idea what their standarf-bearers wore and as RSM never did a standard-bearer for the Hussars, I'll be using a Line Cavalry trooper with a flagstaff in place of his sword. I wouldn't do this to one of the Hussar troopers as the conversion would require major surgery.

Having ordered, I've found myself with a figure or three over from my new cavalry establishment (two officers, a guidon, a musician and two squadrons of eight troopers) of twenty figures.

This led me to start flipping through my Ospreys for inspiration.

I discovered a light corps called the "Volontaires de Saint-Victor" with a charming Hussar uniform of red laced white with a buff pelisse and shabraque. As we know, many of the light corps raised by France were composite units incorporating infantry, cavalry, and, in some cases, artillery!

The "Volontaires de Saint-Victor" were no different in this respect, incorporating eight companies of hussars, eight of fusiliers and one of grenadiers. The infantry wore a blue coat and collar lined and turned up in red with white small-clothes, buttons and hat lace.

I thought it might be worth raising a couple of companies of hussars and a couple more of fusiliers. I do wonder though at their role on the tabletop, though. I mean I can see that you might use the infantry as skirmishers, but the cavalry?

I suppose I could brigade them with the Turpin Hussars. If nothing else, I suppose I could use them in a small skirmish battle of foragers versus foragers, or in a scenario involving scouting forces. I guess I see their role as being more operational rather than tactical and am having trouble getting my head around their tactical role.
Posted by Bloggerator at 9:43 AM No comments:

I forgot that I made an order with DPC for some more RSM miniatures before Christmas.

I got the reminder today when they arrived in the mail.

Now I just have to decide how far the Wurttembourg Regiment gets bumped in the schedule.

Alte Fritz wants me to get on with the Gardes Francaises, too.
Posted by Bloggerator at 8:54 PM No comments:

Brigadier the Marquis Creosote Force-Majeur reviews some rather drab grenadiers who fade into the background in the glare of his splendour.
Posted by Bloggerator at 8:02 PM 2 comments:

The Duchy of Alzheim: Temptation

The Duchy of Alzheim: Temptation
Posted by Bloggerator at 4:51 PM No comments:

Temptation is a dreadful thing.

A new OSW member has posted the following link to his featured work on the Prince August web site.

I still own some of the 24mm Napoleonic moulds I got one Christmas as a child.

I am starting to dream of a 40mm "big battalion" project to work with some rules I've rediscovered.

Most of the moulds are about 10 euro each. They are good for HUNDREDS of uses.

Someone help me, please.
Posted by Bloggerator at 4:37 PM No comments:

The instructions for that Historex Kit reference the Funckens' "Guerres en Dentelles" as a uniform guide.
Posted by Bloggerator at 8:13 PM No comments:

And now for something a little different. 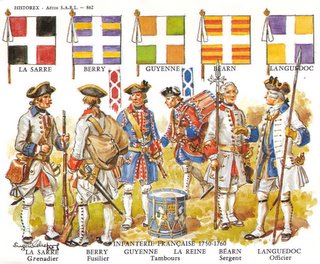 Just recently I was fortunate to acquire a superb Historex kit of a French Infantryman of the 1750s. Something of a departure from their more usual Napoleonic fare, the painting instructions are bu Eugene Leliepvre and worth the asking price on their own! They are simply gorgeous and I'm sure they will wind up framed on my "war room" wall.

Take a look at that. Eye candy or what?

Posted by Bloggerator at 7:54 PM No comments:

Abe Books. We all know and love Abe Books. That's where we get our pricey old Blandfords and Pengel and Hurts and copies of Charge!

Some months ago, I found a copy of Charles Grant's "The War Game" going there at the right price and put in my order.

Sadly, unbenownst to me and the poor vendor, an Abe-glitch truncated my address and to him it looked like a PO Box.

Good news, however; the dead letter office did a "return to sender" and my nice vendor is going to try again with the correct address!

Wish me luck.
Posted by Bloggerator at 1:15 PM No comments:

I am very pleased and proud to announce that this blog has been awarded the Battlegames Award for Excellence. My thanks go to Henry Hyde of Battlegames. Please take a moment to visit his excellent website - see the links section to get there.
Posted by Bloggerator at 2:06 PM 1 comment:

Wow - and thanks to everyone who has come to see what's ticking away here at the Duchy! Happy 2006 to us all!
Posted by Bloggerator at 8:38 PM No comments: