You may have guessed from the last few posts that I am working away at the Fin de Siecle Alzheim Project.

I'm trying to get a little synergy from a current painting challenge to boost things along and so far we are not doing too badly - 18 Alzheimer and 11 Prussian infantry painted. Additionally, I've painted up a couple of siege pieces, part of a Renedra Pontoon bridge and a prototype river barge to use in a river crossing scenario.

I've another 10 Prussians on the painting bench ready for their first serious encounter with the paintbrush, another 10 or so waiting on cleanup and assembly and another 20 or so in the post!

On top of that I ordered a unit of 12 Spencer Smith "Classic" Uhlans, one of the Willie ones (because I hear they are lovely!) and another 20 Bavarian infantry. I'm hoping this will give me a bit of momentum/motivation to move the painting along.

So then, by the end of this particular process, I'm hoping to have three units of infantry, a unit of cavalry and a battery of guns per side ready to go by the end of April.

A nice little force, I think. 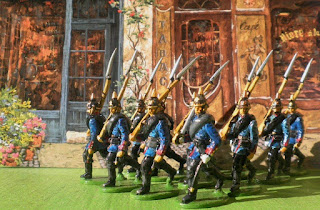 Whilst en-route to a sojourn spent taking the waters at Augusts-Bad, your correspondant had the singular good fortune to fall in with a young Alzheim officer of infantry at the great fortress city of Prenzlau on the River Mur. He was taking a spell of leave and was likewise headed to take the waters. I was delighted to share a berth in the little steamer, one of the many which plies the river, with this most charming young man.

I soon appreciated that he had just terminated a most trying assignment across the border in the Germanies where he had been attempting to ascertain the purpose of recent military manouvers in the region of her northern borders.
One might readily appreciate Alzheimer wariness.

After all, Bismarck says Alzheim was ever a feminine city - a natural bride for masculine Berlin. His opposition to Austrian influnce has ever been well-known. He once said that a marriage with Vienna would be a perversion of everything that was natural.

Posted by Bloggerator at 11:39 AM No comments:

Scene outside a Tabac in the Quartier Francaise

As may have been remarked here and there at varying times, there is nothing quite like a painting challenge to get the old juices flowing.

Keen observers of Alzheim history will note a La Rosee Regiment fighting in the wars of the 1740s and -50s. This is to be expected of one of Alzheims' oldest Regiments, first raised in 1681 for the Turkish Wars.
Posted by Bloggerator at 8:08 AM 6 comments:

Sorry for the delay - life just gets in the way of play sometimes.
They really do put me in mind of that "80s Citadel" style of figure. Surely some Warrior of Chaos could stand in for the Warrior in Jet and Gold?
Flame Lances are on their way.
Don't forget, Kamagian Guardians on Flamingos! And Ornithopters.

I'll start to paint some of these up next week. I might start with the Vultures.
Posted by Bloggerator at 1:43 PM 3 comments: