OK, I was mucking around with the whole of my French infantry tonight and was pretty impressed with how they look en masse. What you are seeing here is the result of about two and a half years' work; nearly as long as I've been a member of the Old School Wargamers Yahoo Group.

May I take the opportunity to thank everyone who might visit this place for their inputs - especially Stokes, Jeff and Alte Fritz - who have long been regular and supportive contributers, and to acknowlege the role that OSW has had in giving me the inspiration and ongoing encourgement to keep both this blog and this project going.

My most sincere thanks to you al,l and I genuinely hope that we all keep in touch, sharing ideas, stories and perhaps even having a few laughs on the way.

The Berry Regiment as of the weekend - almost done barring three NCOs, two musicians, an officer and a little terraining.
Establishment is set at a mounted Colonel, two ensigns and three "companies" , each of an officer, a drummer, an NCO and 12 musketeers. A total of 48 figures.
I've about another campanys' worth of French figures on the pile. Now, I know that I was speaking last week about usuing them to kick off another regiment, but I'm thinking of using them to round out a couple of the other existing regiments.

What's on in the Duchy

I wrote this to a friend today and thought it germane - it's slightly edited to conceal some identities:

(Replying to a query about the Strudelberg Game)

Very slowly; I got all distracted by Bill P in the US wanting to do a Ticonderoga/Carillion game for the 250th Anniversary next year and have been madly painting my commitment of French troops to send him (about 100 figs) whilst also helping out a little with some bits of research for the scenario.

In the meantime, I've also gotten involved with Andrew from the group that did the super Gallipoli game at CanCon who it turns out is also a fan of the Australian Colonial scene and doing a "The Russians Are Coming!" scenario at some stage soon - so it seems I must also paint 80-100 British/Victorian Infantry in Home Service Dress at some stage in the not-too-far future. Blimey.

Still, I've managed to finish a Hungarian regiment, a Bavarian regiment (each about 50 figs) and another 50 Grenze and 20 Mounted and 10 dismounted Dragoons. I've still got plenty of unpainted Grenze and Bavarian Dragoons to be getting on with though.

And Austrian hussars, too.

In the meantime Amy and I are off to Europe on the 27th September for six weeks. Decision time when I get back.

I've just ordered a TSaTF unit of Sikhs and a representative sampling of the rest of the Castaway Arts NWF ranges which I'm meaning to review for Battlegames. Can I say that they were launched with a bang at Historicon? It makes for good copy..!
Regards,
Greg
PS: Do I sound like I'm a little over-committed?

I’m delighted to report that I’ve just laid my hands on a nice hard-back copy of “Setting Up a Wargames Campaign” by Tony Bath. I’m just in the process of absorbing it now and am loving every minute – thanks to Paul and Teresa Bailey of “The Keep” via eBay. They give excellent and speedy service for those who are interested.

The “Berry” Regiment is coming along very nicely and ought to be pretty well finished by the weekend. This is going to bring my French infantry up to 7 battalions: The Gardes Francaises, the Gardes Lorraines, La Reine, Bourbonnois, Languedoc, Bearn, and of course, Berry.

I’m keen to keep going and I think I might make a start as soon as these guys are finished on another unit of infantry, perhaps one of the senior regiments – Picardie, Normandie or Champagne? I’ve also a few more Bavarians to paint before I can sign off on the Leib Regiment. Not sure which just yet. I’ll follow this up with some more cavalry – I have some stockpiled that I am itching to get started on just now.

On another note, I've just bought a laptop with on-board WiFi and have finally gotten around to buying a 1GB card for my camera. I've loaded up Photoshop on the device to pretty the piccies up, so I'm looking forward to doing some mobile blogging from the six weeks starting 27th September when my partner Amy and I go off to Europe. Whoopee!
Posted by Bloggerator at 12:03 PM 3 comments: 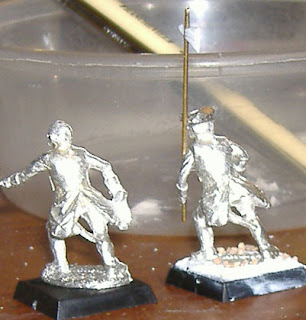 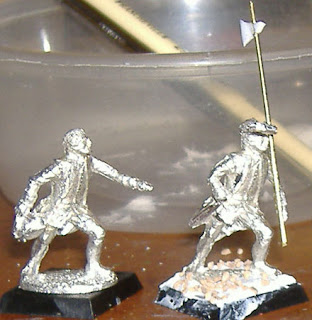 Basically I’ve cut off the right hand, the left arm and the hat from the original figure. The right arm has been bent into a posture more suited to a walking or “advancing” pose, whilst the left arm has been bent a bit and glued on so that he might credibly be thought of as carrying his pole-arm. The amputated hat has gone onto the carefully sawn-off top of his head. I think this really changes the look of the figure, giving it a much more erect carriage than the original.
UPDATE: The figure also converts nicely to make a gunner hauling on a wheel, I've since found. I think I'll paint mine up as an infantryman pressed into serving a gun. I think the figure could also be capable of wielding a variety of artillery tools.
Posted by Bloggerator at 7:04 PM 1 comment:

NCO and Colours for the Berry Regiment 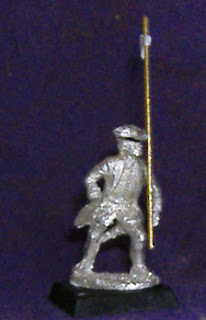 More infantry need painting up today to glear the goals I set myself for the week. I've nearly finished converting the NCO, as you can see here. He looks pretty good so far - I'll need to patch him up with some Green Stuff where his hat meets his head and his re-positioned left arm meets his shoulder. I'll also need to re-model that part of his coat I had to saw through to get his hat moved! 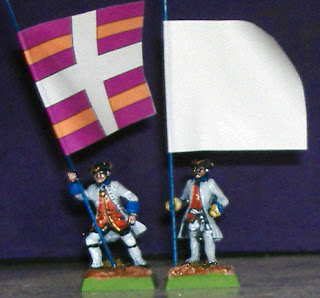 From the Warflag site with a little re-touching done in Illustrator. I like to make my flags a bit over-size so they stand out more on the table. These are 35mm square.

I need to cut the flag-poles down a little and add finials. Perhaps I'll add the cords from fuse-wire or the like. 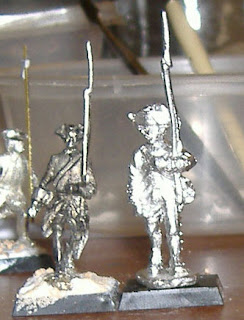 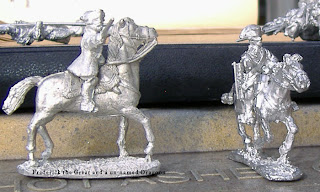 Recently I laid my hands on some samples from Eagle Miniatures. They are a company trading out of the UK with a small-ish number of ranges covering NApoleonics, ACW, Moghuls, 7 Years' War, 100 years' War, and a few Hadendowah in 28mm and in 15mm range covering Napoleonic Russias and the Franco-Prussian War. These ranges are all fairly eclectic and incomplete, the 100 Years' War range amusingly containing a King Arthur, a Knight returned from the wars and a Welsh Spear-man.

I ordered some sample French and Prussian infantry, a personality figure of Frederick the Great and a Prussian Dragoon.

Well, what a mixed bunch they were. Overall the figures are quite nice, really. The cavalry sit their horses well (unlike say, Elite!), the infantry are quite pleasing in their way too, although some more than others.

I would rate the animation of the castings as being a cut or two above Old Glory. What I mean by this is while the figures have some of that OG liveliness, they still maintain a certain stately poise. the sculpting of the figures themselfes is somewhat unrefined, perhaps even a little crude by todays standards. the figures are not "fine" in the manner of Staddens or RSMs, and to me represent a couple of paces down the road that leads to the Foundry stable of figures.

The figures have a few neat touches. I like the way the prussian dragoon had a notch cut out of the front of his shoulder so hos sword-arm (cast pointing out from his body) could be bent forward and secured with super-glue. The marching Prussian infantryman with shouldered musket is a gem, as is the Grenadier in the march attack pose. I was especially impressed by his mitre. Lovely, and I'd love more to create a grenadier batalion. 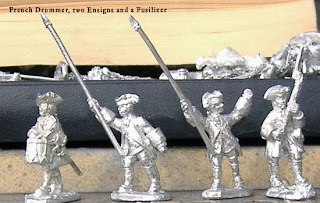 On the downside, I understand that this is an older range of figure and that there would be some flash from the review of another OSW-er. Fair enough, and this was removed with a sharp blade. Why though was I as a customer who clearly stated that he wanted some samples (the implication being that I wanted to test the waters before I dropped hundreds of dollars on a few 60-figure batallions) would you as a manufacturer supply imperfect castings? The Prussian Dragoon was missing most of his musket, and if you look at the secoind figure from the right in the picture of the Prussian infantry, you'll see the Ensign was missing the top half of his flag-pole!

And please, if you are going to market a personality figure as Fredrick the Great, it'd be nice if he looked like him!

The French infantry were OK, but nothing to set my world on fire. I'm sorry to say that my benchmark for French infantry is the old "Willie" range ang these suffer by comparison looking, simply, crude.

I'll paint these to solidify my view, but for now, I'd create a batalion of Grenadiers and a Dragoon Regoment with these figures, but probably stop there and carry on with my RSMs.
Posted by Bloggerator at 3:13 PM 7 comments:

I've been on a bit of a book-buying spree recently.

As a result of my recent interest in logistics, I went and bought Martin van Creveld's "Supplying War". I'll report back as I get through it. A quick scan looks fascinating - thanks to those who put me onto it.

Recent eBay wins have put me in posession of a number of new Blandford uniform books which I always treasure for their lovely plates.

Another gem was the Ian Weekly book on building wargames terrain. A cut above the "Touching History" series, I think!

Furthermore, I've also acquired about 30 White dwarf mags from all stages of their first 140 issues and so I feel I have the best of the series - certainly WD isn't really what it used to be.
Posted by Bloggerator at 2:37 PM No comments:

Here is the first company (plus a few extras) of my new regiment, that of Berry.

Note that I have finally (!) gotten around to making a start on terraining the bases. I'm using a gap-filler, plaster-in-a-tube sort of a preparation - it's easy to use, dilutes with water and requires only a wet sculpting tool or finger to shape it.

I'm using some GW "Scorched Grass" for vegetation; I just pop a dot or two of superglue on the base and dunk it in the pot and it's ready to go. A quick zap with the spray-on varnish and it's (hopefully) there forever. I think that the varied colour of this mix looks rather better than the electric green also available from GW. I definitely think that "less is more" with this material.

I am painting another company currently and hope to have them finished off for the weekend. At the same time I'm also terraining the bases of my large company of Compagnies Franches de la Marine. Furthermore, I'm thinking of converting the fairly useless French NCO figure into something a little more NCO-ish.

You know, looking at the lads as I am just now, I really want to do a 2-3 figure command vignette.

Posted by Bloggerator at 2:22 PM 2 comments: