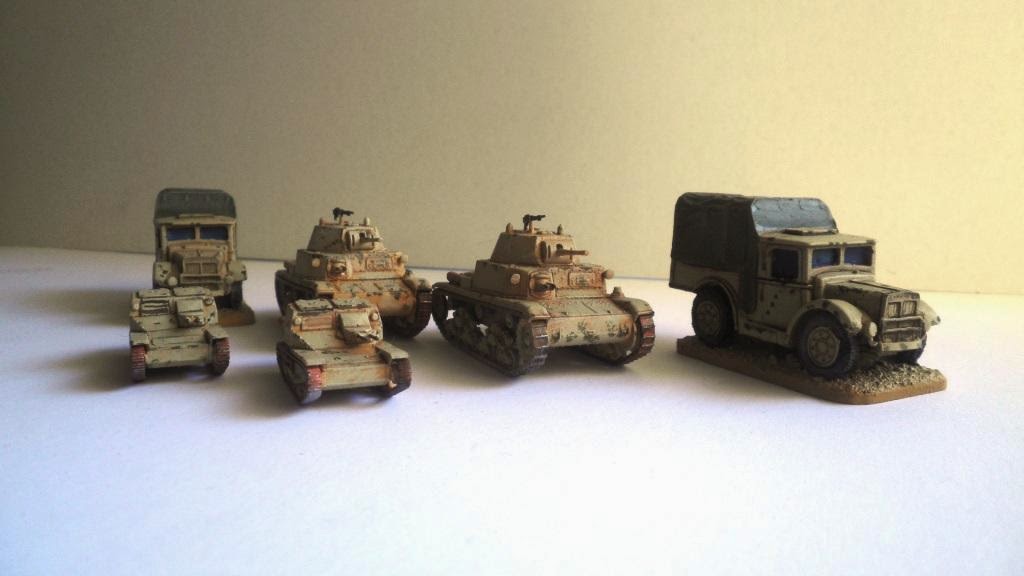 Languishing upon my paintuing desk for almost the entirety of the year have been these half-dozen Italian vehicles. 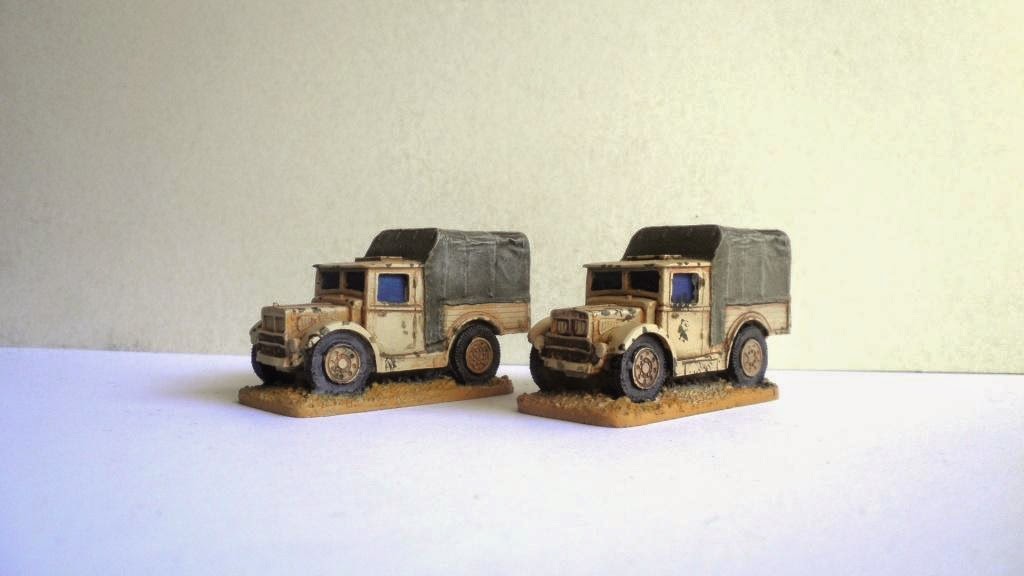 Trucks are by Minimi. 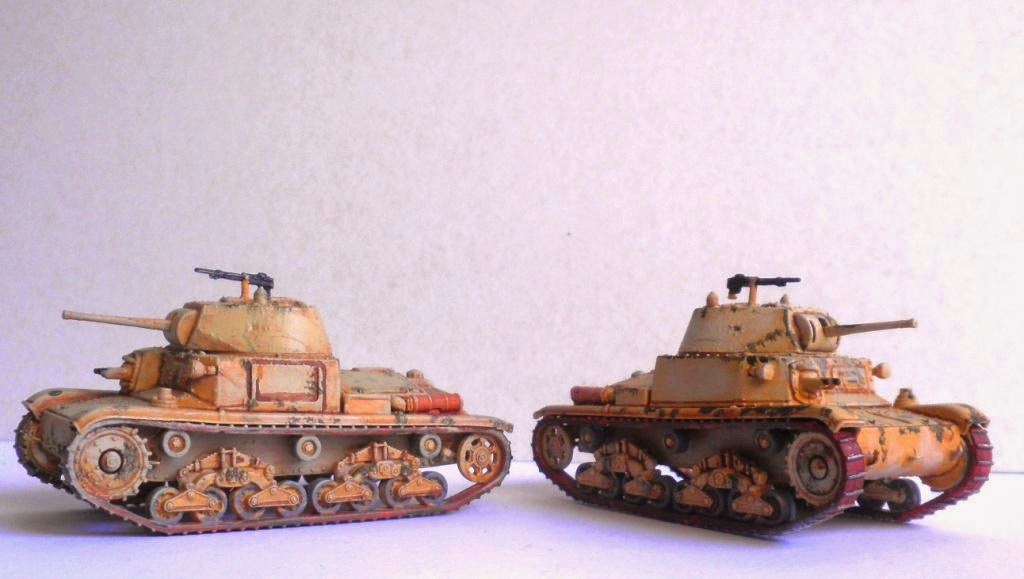 Tanks are Italeri quick-builds. They've obviously had a hard life. I should do the right thing by the crews and put some sandbags on the glacis. 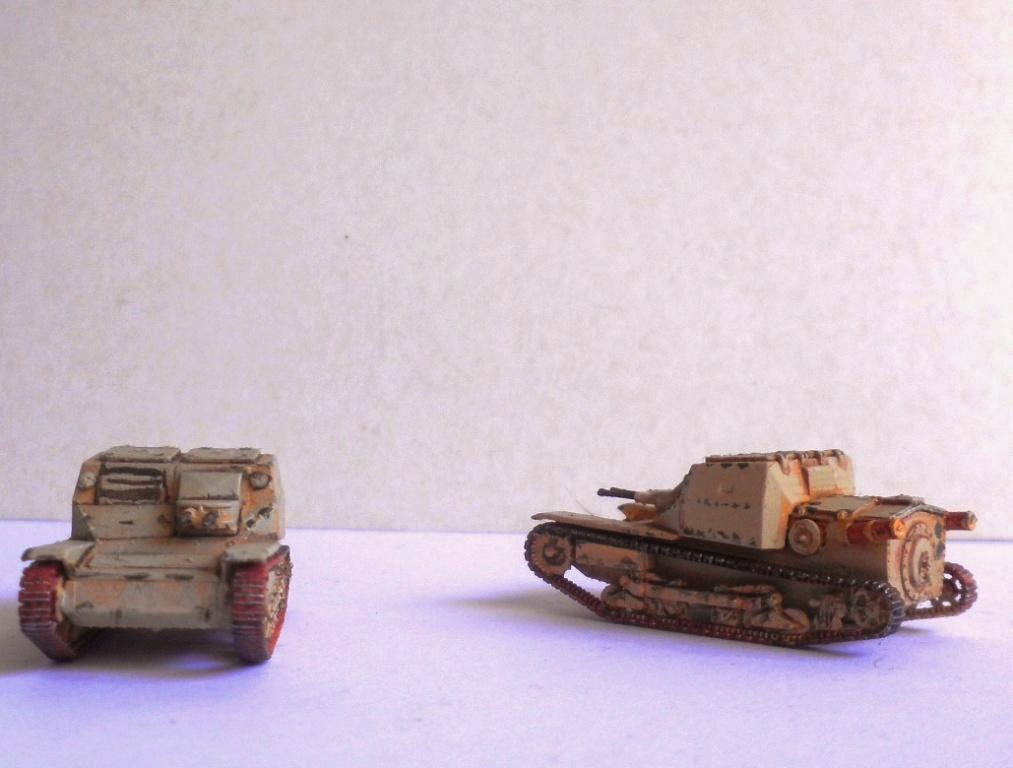 The L3/33 tankettes are by S-Model/Sextant.Lovely little kits and much less fiddly than the newer releases by this manufacturer.

I have one more truck waiting for me, then we're done with them for now. The top highlight is GW Bleached Bone which looks rather good over the army Painter Desert Sand which I damp-brushed up with a 50:50 mix of that and GW White. The chipping is almost the last of my long-lived pot of GW Catachan Green. The lining in is a suitable dark brown with a teeny drop of black in it.
Posted by Bloggerator at 6:12 PM 2 comments:

The War to End All Bores

I've been re-reading Packenham (among others) on the Boer War these past couple of weeks.

I think I have my head around the main features of the early war.

* The relative deadliness of the beaten zone - both in it's depth and in the volume of fire that could be laid down. In my mind, getting killed in a battle by missile fire is more the outcome of a lethal accident pretty much throughout history, but one that becomes more and more likely as we get closer to our own - doubtless charming - modern age.
* The difficulty that may be encountered in locating an enemy who is well concealed both by design and by the use of smokeless powder. We begin to see the emergence of the 'empty battlefield'. The relative ineffectiveness of artillery due to this issue.
*Entrenchment. Let me simply cite Magersfontein for the correct use of this expedient and Spion Kop for it's incorrect application.
*Communication was a liberating and a limiting factor I feel. Easy to disrupt and hard to maintain, the telegraph allowed improved comunication at the strategic level, but at the operational level, I believe it encouraged generals to believe they could command from the rear.
*Infantry tactics. It took more than a few disasters, and I cite again the battle of Magersfontein and the experience of the Highland Brigade who got themselves trapped 400m before the Boer lines in quarter column and were shot to pieces as they tried to deploy, before the British started to adopt open order and fire-and-movement tactics.
*Poor tactical reconaissance. Would the Highland Brigade have had it's terrible experience otherwise? Would Hart have stuck his head in the noose if he's known the trap he was walking into at Colenso? Indeed, would Long have ridden his guns into rifle range of the Boers that same fatal day? Tactical reconaissance was lacking at this time.

More as it gells. Any input would be more than welcome. 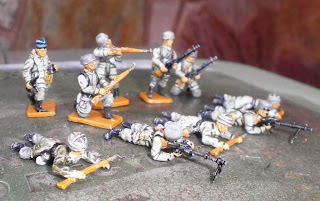 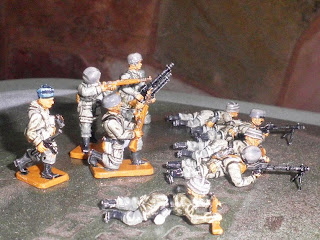 ...or some Valiant German paratroopers.

For my nephew, Max. Max, they're done! Well, almost. I just noticed a water bottle or two that I missed.

We have an arrangement where he builds them and I paint them.

Nice figures, and easy enough to paint although I would not like to do the assembly myself.

Posted by Bloggerator at 9:13 AM No comments:

Lo, and I present for your delectation a unit of Royalist horse in the form of a bunch of one-piece ECW Colonels.

Oh how they languished on my painting desk as I writhed in the grip of my various painting demons. Battles completed and Teen Turtles out of my system (for now) I can turn my attention to the next part-painted unit that similarly pine for the touch of my synthetic bristles.

I'll not go into the remarkable cruise of this small German cruiser nor dwell on the inevitable end of her career. Needless to say the cruise of the Emden and the astonishing escape of her landing party are pretty well my favourite sea-story.

I'll let Mike Carleton, journalist and broadcaster finish with a small vignette from his "First Victory" where he quotes the letter of an unknown German sailor who had been badly lacerated by two pieces of shrapnel, one of which had torn a hole in his back:

"We were rowed along to the Sydney one by one, put into a crane and hoisted on board. I myself was put into the ward room, which had been transformed into a hospital. Here too were berthed the wounded of the Sydney. we were at once properly bandaged and well treated as far as circumstances would allow... Next to me lay a sailor of the Sydney. He had his right foot blown away. He bent himself toward me and gave me his hand."

The Sydney sailor was Rich Horne. The two men lay there, side by side, holding hands in silent affirmation of their humanity.

With the 100th anniversary of the fight between SMS Emden and HMAS Sydney at the Cocos-Keeling Islands on the 9th of November fast approaching, I've failed to resist temptation once again and bought the 1:350 Revell twin boxing of the Emden and the Dresden, and at quite a good price, I think.

Both ships are of pretty much the same design, the main difference between the two being the number and arrangement of the screws which Revell have catered for with alternate rear-lower hull pieces.

I note with some interest a good number of after market bits for these kits includeing self-adhesive wood laminate for the decks and frets of photo-etch for the super detailers.

I'm looking forward to these.
Posted by Bloggerator at 6:30 PM No comments:

According to Boardgame Geek:

Splinter has sent Leo, Donnie, Raph and Mikey on important missions: grab the Mutagen, find April, retrieve the AI chip... and pick up a pizza!
On the way, the Turtles team up to battle Kraang, powerful Mutants, and the insidious Shredder in a maze-like warehouse!
-Object: Be the first Turtle to complete your mission by collecting your Mission Tile and returning to your corner home space.
-Game features:
-Three ways to move! RUN through the warehouse, CLIMB onto stacks of boxes, and LEAP onto enemies!
-Multi-level board!
-Customize the terrain by stacking boxes differently every game!
-Play your Action cards strategically!
-Before beginning the game players must place all the platforms on the board, as well as the mission as villain tokens as shown on the front cover of the rule book.
Each player selects his/her Turtle and receives a mission.
Players begin the game with a mission card and two random special action cards.
Each player begins the game in their turtles designated corner of the board. In turn each player rolls dice to move, leap or climb as you navigate through enemies and obstacles in search of your objective.
Players may attack enemies on the board and can even team up to defeat enemies. Defeating enemies allows players to collect additional action cards. Once they have found their mission tile, players must play a "Go for mission" card to collect their mission tile. The first Turtle to find their mission and escape back to their corner wins!
**************************************************
Sounds like a pretty good basis for a simple, self-contained game.

As it is, the game has great production values for its price. In the end its not a great game for a serious gamer, but it does have some great 3D terrain that is very portable and usable for any miniature game.

I'd probably upgrade it somewhat for my own purposes and even integrate it with my Space Hulk tiles.If that fails to float your boat, there are plenty of other game tiles out there online.

Another idea might be to make up a gridded "battle mat", set the 3D elements up on it and off you go.

You could even pack the whole thing away in a Pizza box.

Posted by Bloggerator at 3:13 PM 4 comments:

Master Splinter. Let us simply say that this is a miniature with very little detail! Still, a quite easy figure to paint. I thought the face turned out quite well. 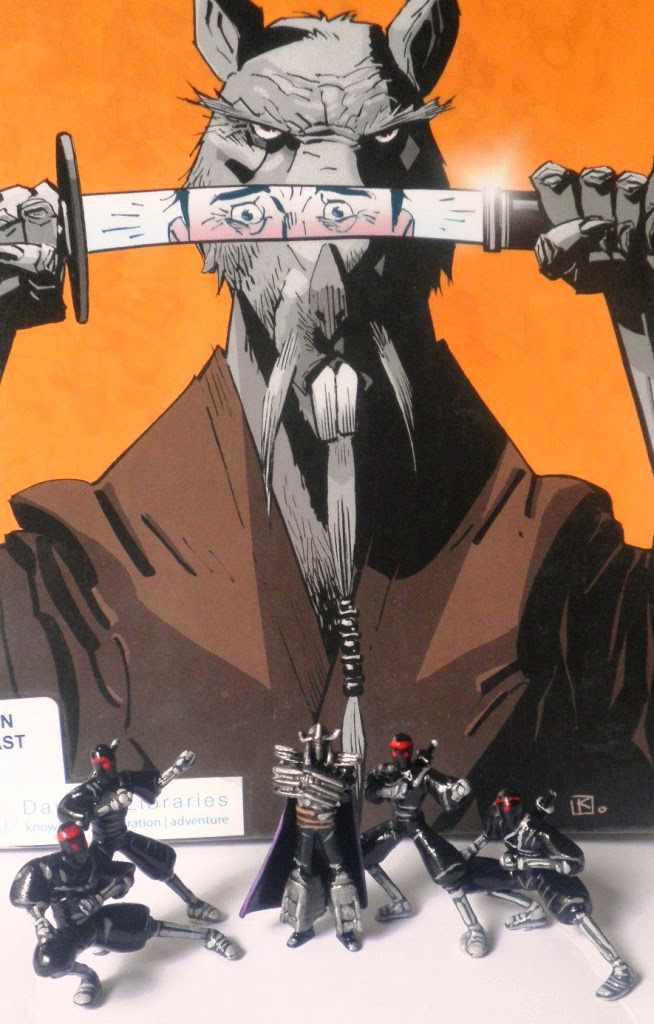 Shredder and his Foot Clan ninjas. Shredder was also an easy figure to paint with some pretty fair detail on his bladed accessories in particular. The Foot Clan were challenging insofar as their limbs really cried out for some painted-in detailing, although their clothes and bug eyes were quite fun. 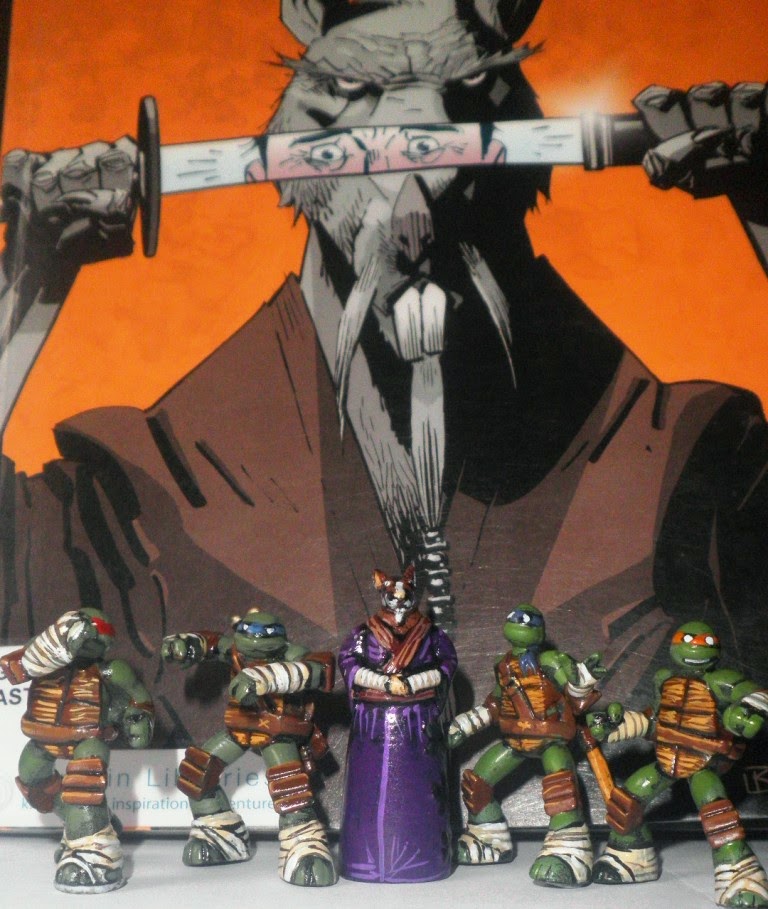 I found the comic book at my local library yesterday and thought the orange made for a good contrast, especially on the green of the Turtles.

Next time, April O'Neill. I'm trying hard to resist painting her up as a kind of Tank Girl analogue.
Posted by Bloggerator at 9:26 AM 1 comment: