Clankety-clank - it's a (Steam) Tank!

A blast from my past - steam tanks inspired by the great Tremorden Rederring website. A heavy mobile casemate with three firing ports for her forward 12-pounder. She tows a Armstrong 40-pounder.

HMLS Oliphaunt wheezes forward, spear torpedo at the ready, a screen of sailors acting as skirmishers. Her semaphore ready to telegraph her next command. 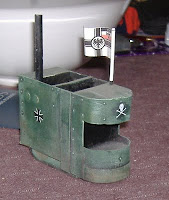 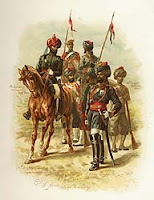 I think I like this one best, but I'm open to argument... 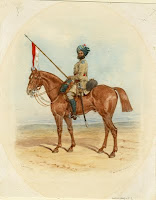 UPDATE: It gets worse... I've just discovered I own a 20-figure unit of Castaway Arts Sikh Infantry...

All the "Defence of Melbourne" work I've been doing recently (in conjunction to Bill's "General Pettygree" excellent adventure/blog/comic-strip) has left me feeling in a decidedly "colonial" frame of mind.

Thus inspired I've been at the Spencer Smith website, looking and daydreaming and lordy, lordy what do I see but some nice-looking Bengal Lancers:

I've been following Bills' blog for a while and find it very enjoyable. I really like the larger units he's using. I'm more familiar with the Sword and the Flame rules, but I do admire what he's doing.

More anon when the samples have arrived.
Posted by Bloggerator at 8:03 AM 1 comment:

What's he up to

Well, it's been ages since I've posted here.

Not all is quiet on the home front, but most of my activity is going on here at the moment:

Best regards to all..!
Posted by Bloggerator at 4:46 PM 2 comments: