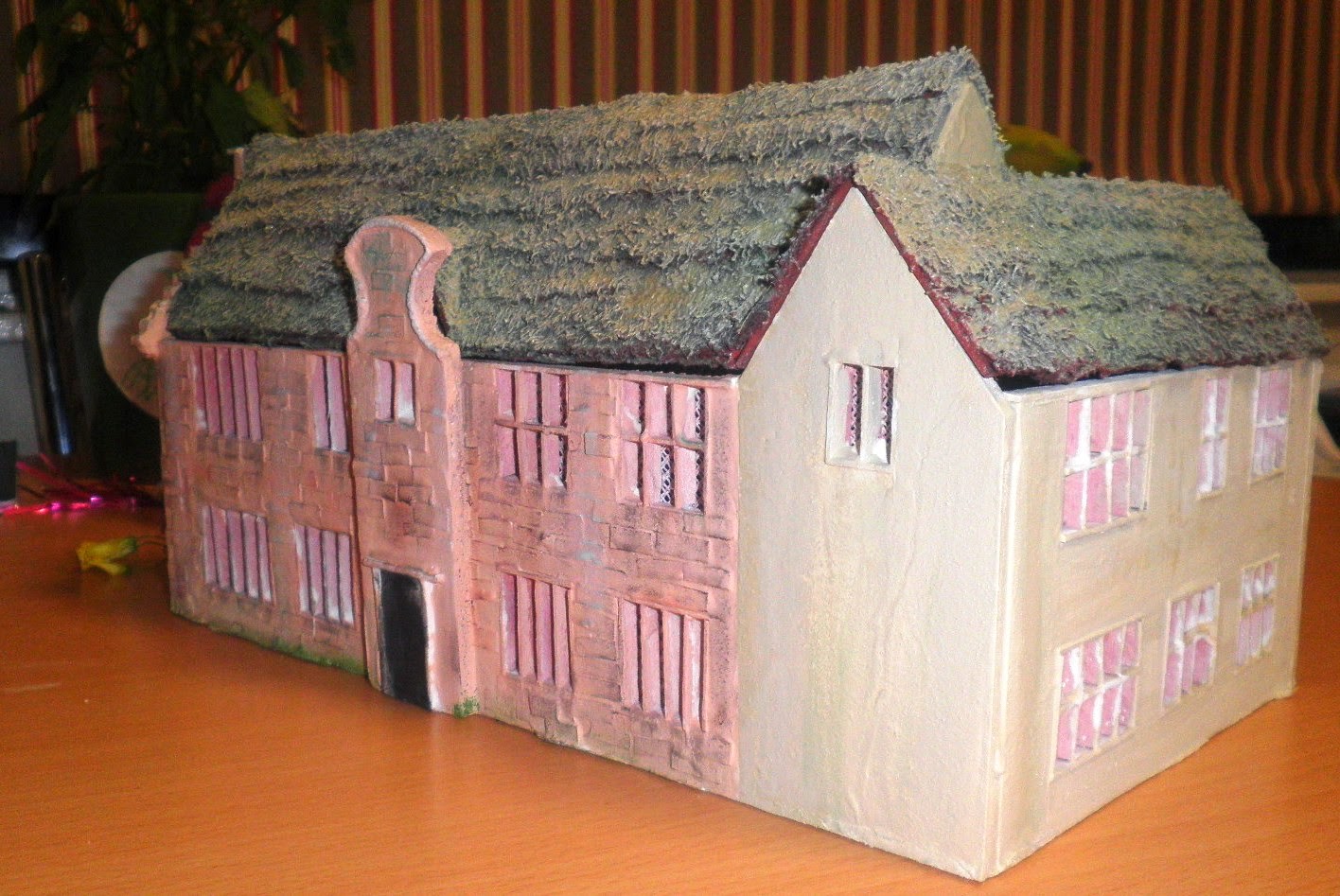 Not quite finished yet, but getting there. Still chimney-pots to add and some merciful outbreaks of ivy to hide my sloppy joints. 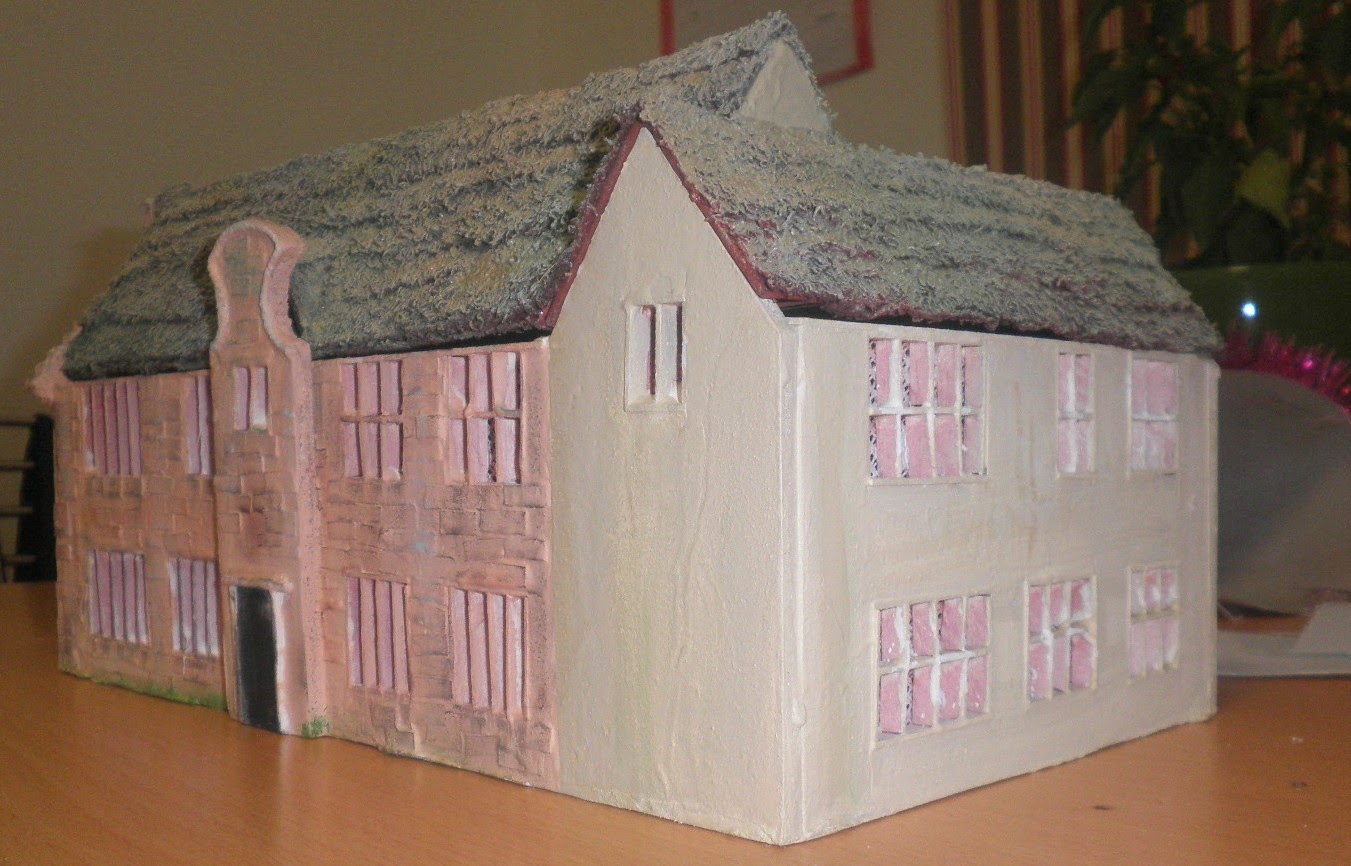 The gable is a bit too high for the roof and might benefit from being about 3mm lower! 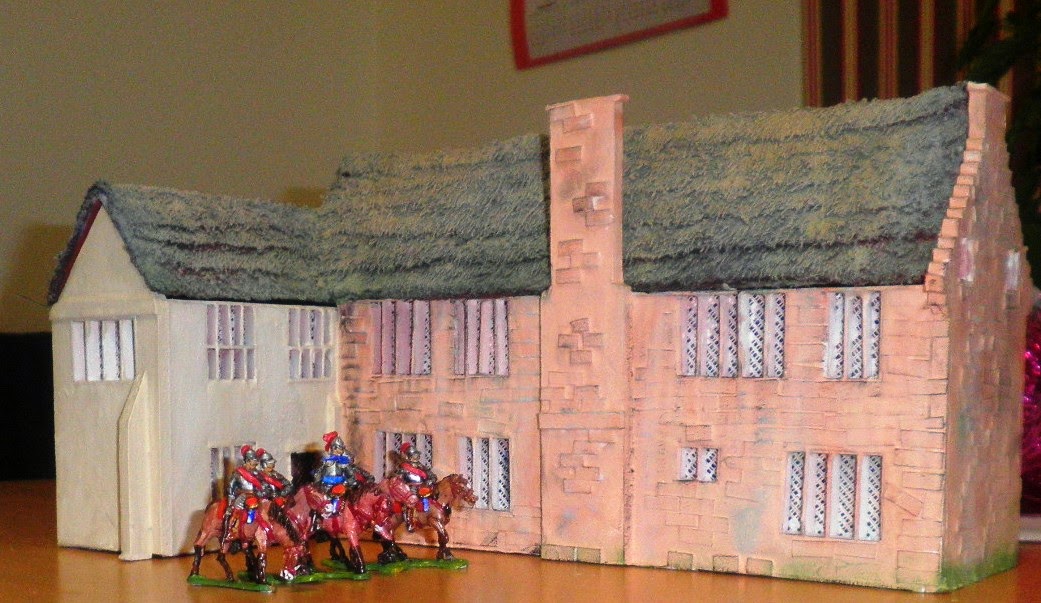 Pooks Lifeguard of Horse are mustering in the gardens. Still one or two to paint up. 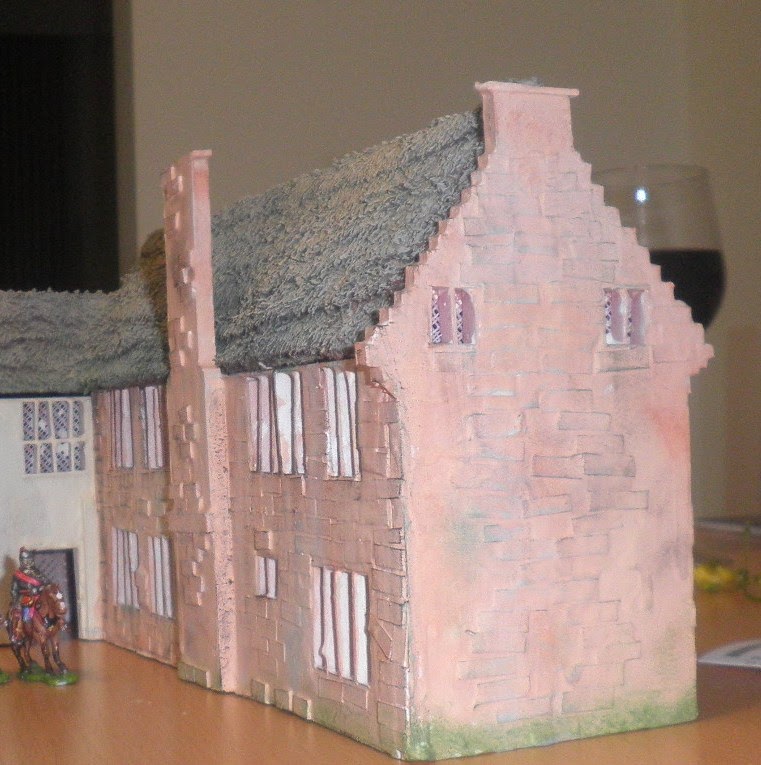 The thatch was made from strips of towelling stiffened up with PVA after being fixed to the roof. It was then painted with spray-paints. The bone coloured paint is - you guessed it - GW Bleached Bone and the red brick was mixed up from a cheap students' set of gouache paints I bought for $6.

I might take some more photos in natural light. the flash is rather unkind.

I want to mount the whole thing on some 5mm MDF I have and then model a little walling, a few trees and perhaps some ornamental hedging from pot-scourer.
Posted by Bloggerator at 7:09 PM 5 comments: 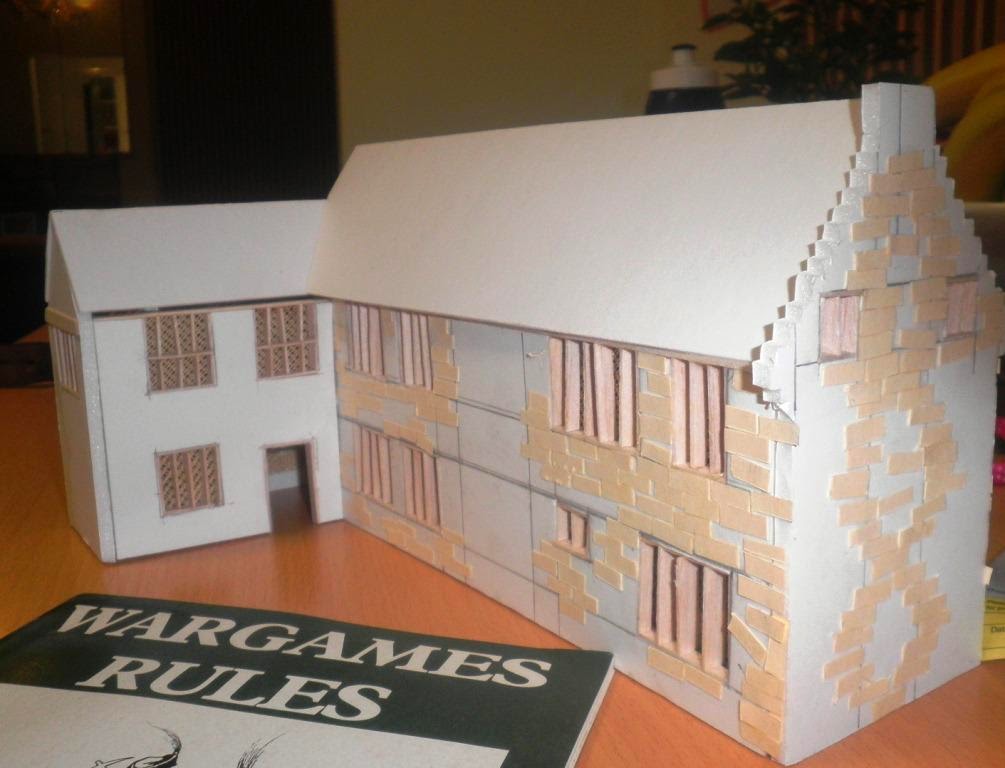 Pook manor, now with all the mullions in, card brickwork added and basic assembly done. At last! 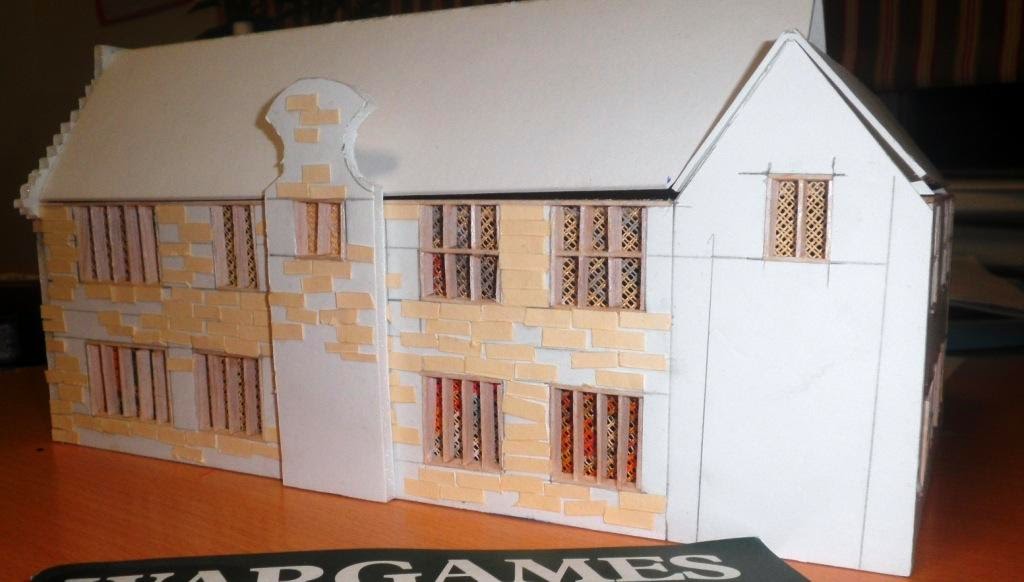 The roof formers are in and a more fiddly bit of cutting out I have never done. Nonetheless, they are there and ready for thecking.

A few minor details remain for the building - a front-dor for one and some decorative moulding from string for another. Then i can go on and plaster the whole thing and undercoat it. thatnis of course when the real fun will begin - painting it. I am planning on doing the main work with gouache washes and then finishing it off with a little light spray painting.

Then I can think about basing it and incorporating a small hedged folly of some sort.

Now, about those rules...
Posted by Bloggerator at 9:30 PM 6 comments: 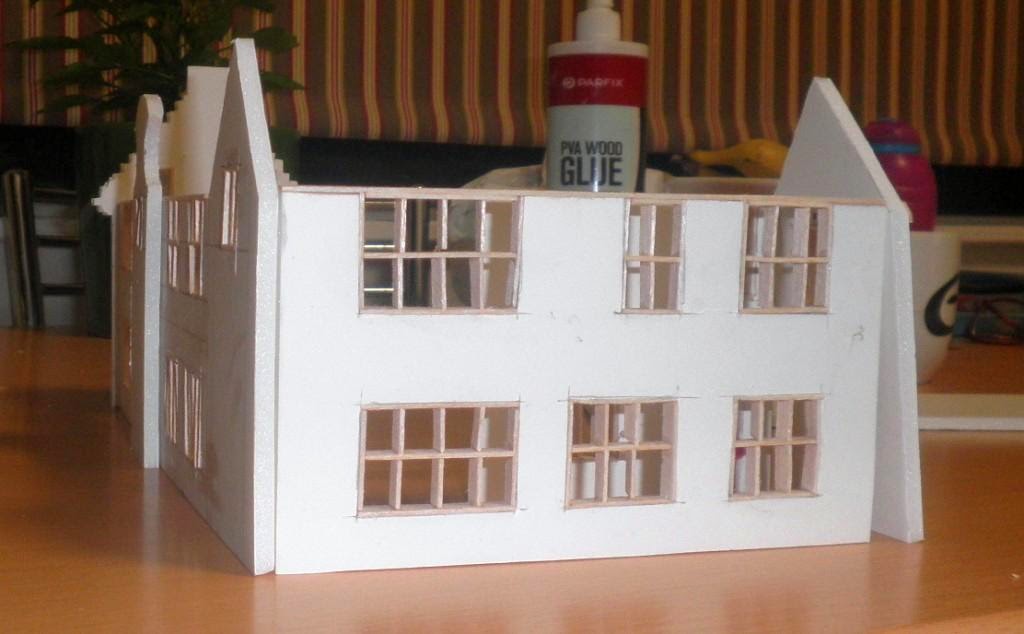 Well, as you can see I've spent some time cutting out and framing the windows on Pook Manor. 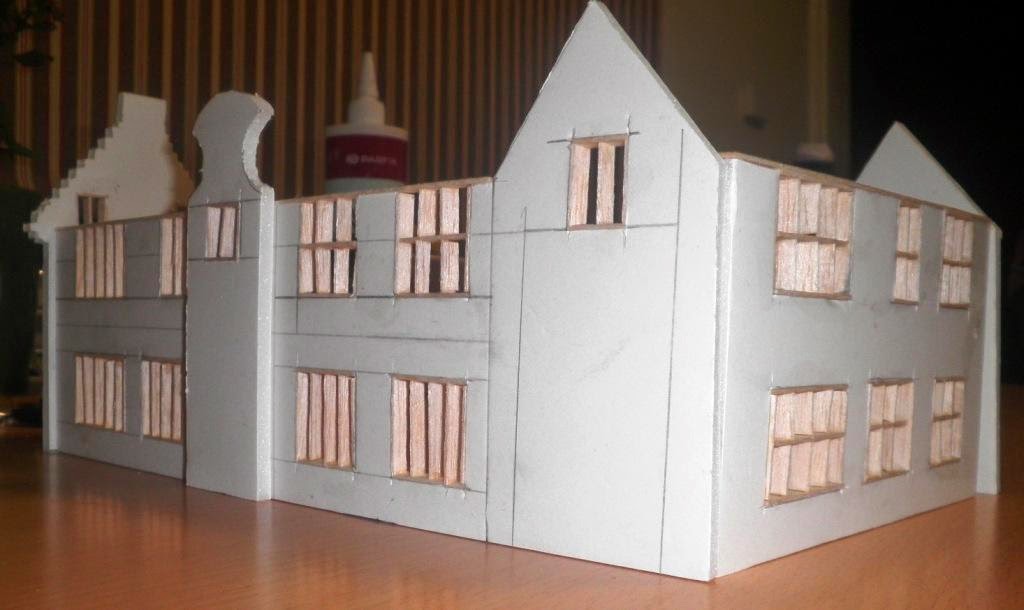 Millions of mullions. I have one more wall of eight windows to do then I'll put together a chimney stack and glue some sort of diamond mesh to the back of the windows to finish them. Then comes the initial assembly of the walls and the first tentative stabs at the surprisingly complicated geometry of the roof.

I intend to apply some brickwork here and there from paper, wash the entire thing over with some very runny plaster filler, undercoat and then apply my main colours. I am intending to use gouache, just to mix things up a bit.

Roofing will be from wither plumbers' felt a la Weekly or teddy bear fur if this proves to be impractical.

More cavalry have arrived in the mail, so progress will slow as I work on them in parallel.
Posted by Bloggerator at 9:44 PM 4 comments: 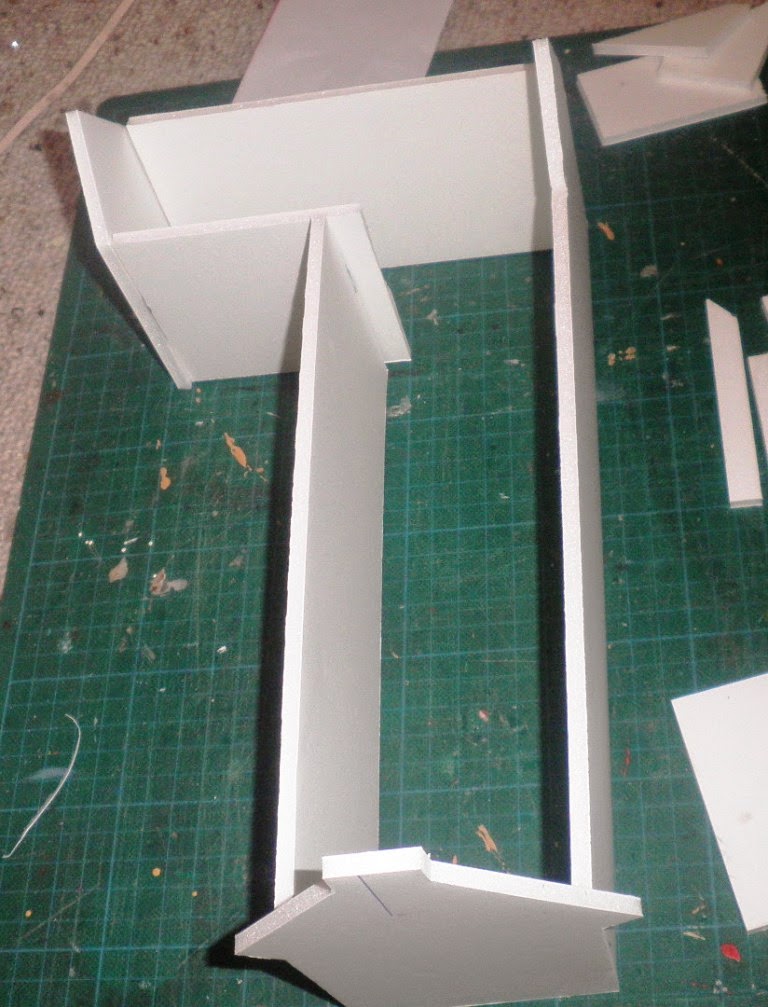 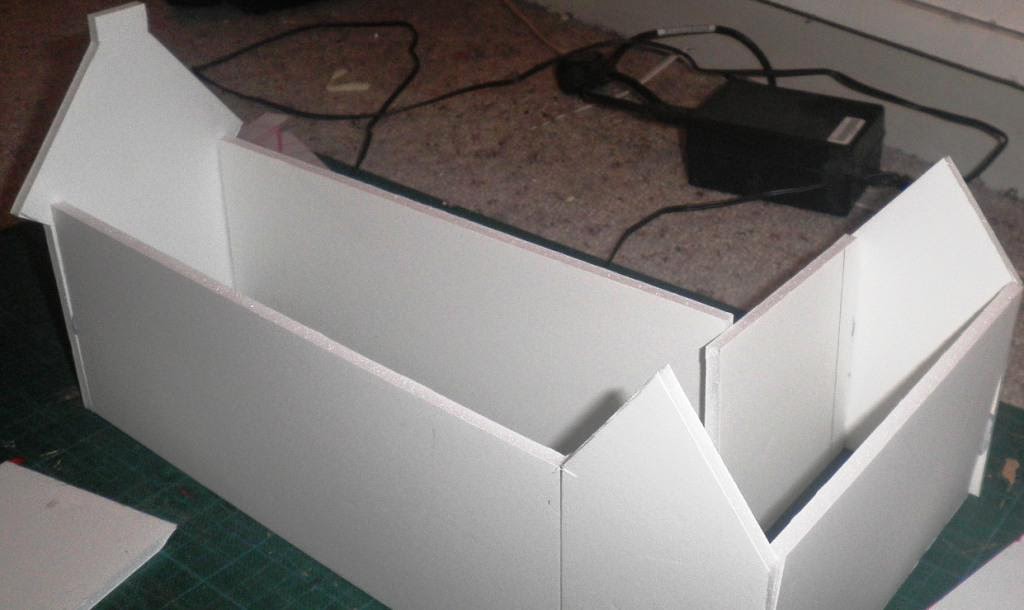 The building is about 12" wide at it's greatest measurement whilst the shorter wing is 7".
Posted by Bloggerator at 1:59 PM 2 comments:

I have spent the past couple of weeks banging my head against a wall rather over a Royalist order of Battle for Naseby.

The long and the short of it is that none of the sources I have looked at so far really agree. There are some units whose strength and location on the battlefield are known - like Rupert and Maurice's Lifeguards, or the King's Lifeguard of Foot. So far however, I am coming up with strengths which vary greatly. from 3300 to 5000 foot on the one hand and 4100 as many as 5000 horse.

Currently I am strongly tempted to split the difference at the lower end and guesstimate 3500 foot and 4500 horse. Note that this is a ratio of 7:9.

I am perfectly happy to be corrected in any of this; my reading has not been comprehensive.

Translating this to the table, and keeping in mind that I think I'd like to keep this within a 4' frontage so as to allow me to represent the Sulby hedges on the Royalist Right, I'm thinking of a maximum army size for the Royalists something like 164 foot and about 200 horse. Not perfectly at that ratio, but not too far out.

The Cavalry I would like to see in two lines, each of five units of eight figures per wing. Of the remaining forty figures, twenty-four would be stationed behind the Second infantry line, whilst the remaining two units would be with the reserve.

This is not perfect, and again, I am more than willing to be debated on this deployment. Certainly I would like to have less cavalry! 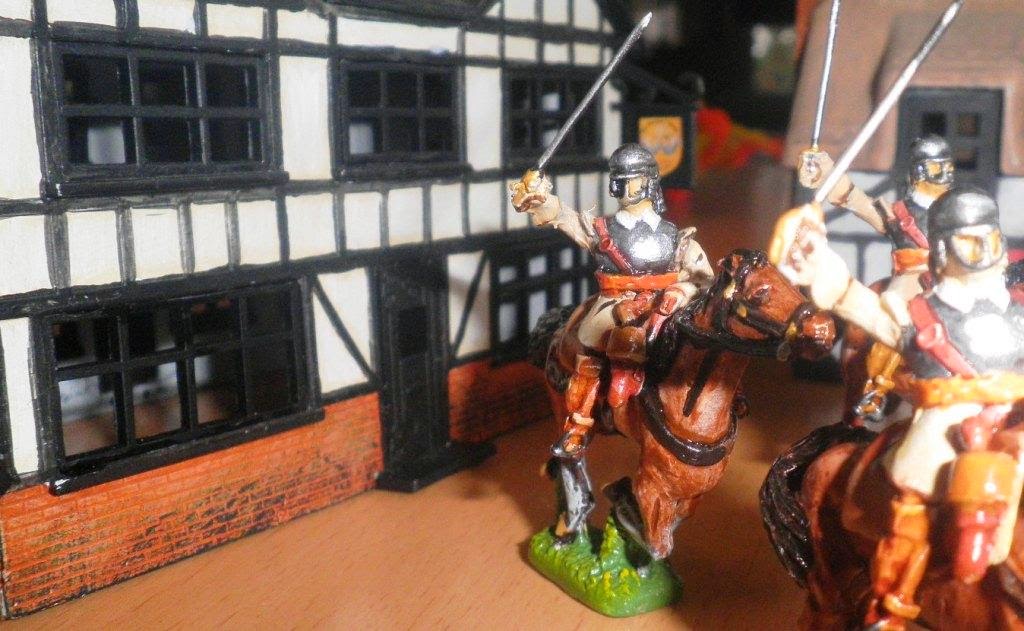 All are standard Hinchcliffe castings, which range is fortuitiously being recast at this time. Good show, Mr Hinds. The only changes I made were to replace the cast swords with beheaded pins and a little animation of the castings with a pair of pliers whose jaws I padded up beforehand so as not to mark the castings.

For the most part I painted these with acrylic washes over the best white undercoat I could get onto the figures. A little lining in was done, just to tidy the shapes up. The metals were 1:1 black and GW mithril silver that I later gave a quick flick with a dry-brusk of plain mithril silver to catch the edges on their pots.

I so had to restrain myself from adding the little red hoops on the arms of the figures. Maybe another regiment.

I'm still looking for a design to paint onto Pook's trumpeter, and there are a few spots where handling has rubbed away the paint. The washes are really quite delicate like that. I found I needed to do an intermediate coat of varnich to protect the figures as I finished up the painting!
Posted by Bloggerator at 9:38 AM 9 comments:

A favourite for flicking through is the Blandford title "Warriors and Weapons of Early Times in Colour" by Neils Saxtorph, illustrated by Stig Bramsen. Mine is the first (only?) English edition, published in 1972 when I was four years' old and watching Skippy the Bush Kangaroo and maybe Rocky and Bullwinkle.

Sensibly concentrating mostly on European models the Danish Dynamic Duo have nonetheless made a stab at an Ironside and have sensibly done him in a rugger top with shoulder pads which as you will all know was wrong; this costume was worn only at Edgehill and soon discarded as impractical as the War progressed.

Smart-arsed niggles aside, and were one to choose to paint the legend, then the colour here is to my eye very attractive and worthy of emulation.
Posted by Bloggerator at 8:46 AM 5 comments: