More on the Croat Terror

I've been knocking a few ideas around in my little head these past few days.

I've become interested in doing a demo game based around the devastation of Bavaria during the War of the Austrian Succession in around 1742.

This probably isn't too suprising considering where my painting and modelling have been taking me these past few weeks, but geez, it'd make a good demonstration game for later in the year.

I was thinking I could put together a scenario based on this where a couple of weak Bavarian battalions with a squadron of Dragoons might try to defend a three villages from a horde of Croats with a large battalion of Hungarians in support along with a squadron of Hussards. The terrain would basically be a long-ish valley with a river running through the midle of it.

The villages could each be assigned a points value depending on their size. Lesser points values could be obtained by sucessfully evacuating their populations. Victory would be based on the number of points accrued by defender or attacker. One of the villages with the highest points value would have to be seperated from the others by a river.

The number of players could be easily varied - the Bavarians could accomodate another by hiving their grenadiers off to form a detachment; their 40-figure battalions could be halved. The Croats could be played be single or multiple companies. The large (60 fig) battalion of Hungarians could be broken down into four 15-figure companies or two 30-figure divisions.

All food for thought.

Any comments?
Posted by Bloggerator at 9:46 PM 6 comments: 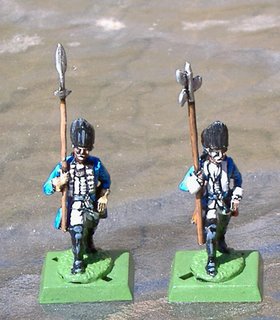 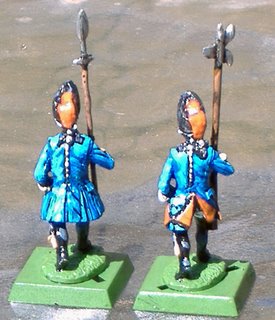 Here they are, all done.

I'
m pleased with how they tirned out. They do have some inaccuracies - the officer should not be wearing a moustache and he ought to be carrying a fusil and wearing a belly-pouch. Overall though, I'm not displeased. The ribbons on the queues turned out OK, but could have been better - I have a long way to go with my Green Stuff technique.
Posted by Bloggerator at 5:13 PM 9 comments: 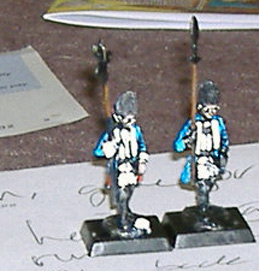 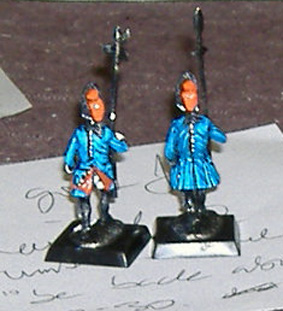 Sorry about the crap photography; the lighting conditions were less than optimal. Still, I think you get the idea. I'll put somthing better up tomorrow. Paints are by Vallejo and Games Workshop. Note that I have used a black undercoat.

Well, the Croats were painted that way, too.
Posted by Bloggerator at 9:15 PM 2 comments: 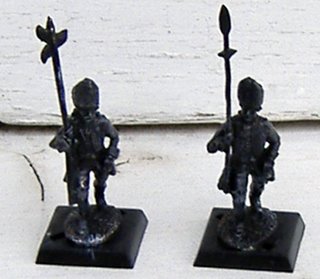 Here they are, fresh out of the camera.

A note to me - use a razor-saw rather than clippers next time - you'll need to do less to reconstruct the necks!

Posted by Bloggerator at 7:53 AM 2 comments:

Let Me Convert You

I got a little crazy tonight with the clippers and the greenstuff.

I've created an Officer and an NCO for my Bavarian grenadiers. Leib Regiment, I think.

After devastating the castings with my clippers, I had to re-biuild the necks and the bags for their grenadier caps with the Greenstuff. And the little ribbons on their pigtails. They look OK.

Pictures to follow tomorrow morning when they have dried enough to photograph. I'm fairly happy with the result.

I'd give a lot for a dremel tool to save myself from the tedious, endless filing though!

For my next trick I'm going to paint these guys and then a 60-figure regiment of Hungarians. Digging around tonight; having a general audit of my lead mountain, I've found enough castings to do just that and it's a pretty exciting idea for me. I even found enough castings round to build up the strength of the Leib regiments' fusiliers to a reasonable (40 figs) level.

I also dug out Alte Fritzs' "Croat Terror" rules and they look like enough fun for me to contemplate a little game (demo? convention?) later this year. I'm envisaging a Bavarian battalion versus an indeterminate number of Croats c.1742.

Those among you with a taste for such things may recognise these Croats as being Carlstadters from the Likaner Regiment. Reference for painting then (and I think also for the original sculpts) is my Blandford "Uniforms of the Seven Years War, 1756-1763" by Mollo and McGregor.

Not so much a new venture, I was combing thru my lead mountain and found these odds and ends. They're not quite finished (they need basing and a few need loose weapons attached), but I was so pleased with them, I had to show off...
Posted by Bloggerator at 6:16 PM 6 comments: 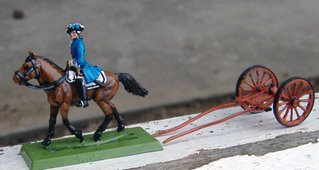 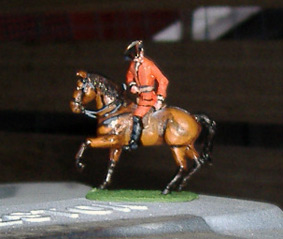 I reckon it's been about two months since I painted any figures.

It's time to get back on that wagon.

Some few weeks ago Ioannis Mavromichalis (he of www.wargames-etc.com fame) kindly sent me a grab-bag of RSM miniatures including a mounted artilleryman I'd never seen before and these whetted my whistle rather. I now seem to be painting again, and tomorrow I hope that I'll have a couple of images to show off.

Thanks Ioannis.
Posted by Bloggerator at 9:56 PM No comments: 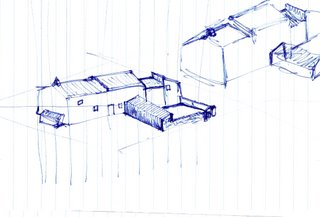 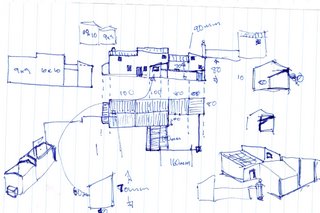 I thought I'd take the time to write a short piece on how I built the Spanish Farm.

I started off with the imaes I found on the internet - they are still up on the blog a few entries back. From these I drew a rough cartoon to work out the relationships of the various buildings to each other, their rough proportions and to get an idea of the kind of details I wanted to include.

The next thing I did was to work out the dimensions. My Peninsular collection will never grow to be too large, so I felt that I could make the buildings a bit larger than I otherwise might, thinking that the larger they are, the more useable they becoime in a low-level game.

I took my note from the height of the walling I use, which is about 40mm high. From that, and with no small degree of fudging, the rest of the dimensions were reasonably easy to work out.

The larger "dual" building with the peaked roofs are 80mm wide and 190mm long. The wall heights are 100mm and 90mm. the roof peaks are 15mm higher than the wall heights.

The little lean to out the back is 60mm wide and 30mm long. It is 50mm high at it's highest point, falling away to 40mm at it's lowest vertical point.

All the walls were cut from foam core and apetures cut to take windows and doors from model railway accessory kits.

Finishing was done in the same way as the other Spanish buildings I've described in earlier posts. I hope the images add what the text may lack!
Posted by Bloggerator at 3:00 PM 6 comments: 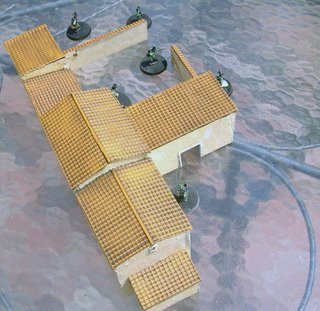 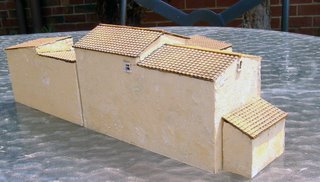 Well, I'm back from holidays and back on deck here.

Today I came pretty close to knocking off my "Peninsular farmhouse". All that's left to do is a little detail painting.

Sean Bean's Rifles do what they do best - provide a sense of scale!

As ever, click on the image for a larger view.
Posted by Bloggerator at 11:53 AM 6 comments: