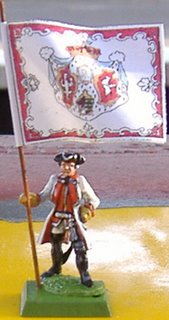 Converted from the RSM casting of a Prussian officer with a walking stick, he's had the walking stick cut away, that arm has been bent into a new pose, the hand drilled out and a wire flag-pole inserted. I also drilled a hole in the base to take the butt-end of the flag-pole for extra strength.

The flag is by RSM. That for the British Officer in yesterday's post is from the "Warflag" website; I chose a generic English flag and hand-painted the rose wreath and inscription. Our man is from the 51st Foot who fought at Minden.
Posted by Bloggerator at 8:01 AM 4 comments: 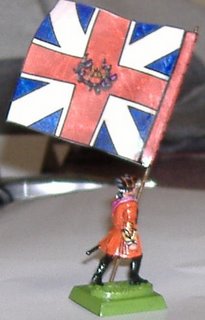 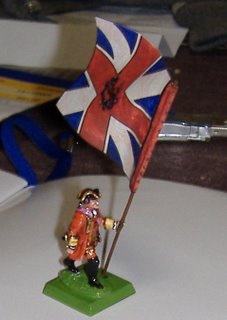 Over the weekend, I decided to convert a couple of RSM Officer figutes into more appealing ensigns than the "Cadet Standard Bearer" currently on offer.

I took the English Infantry Officer and cut his arm away from his body with a sharp blade and repositioned his arm (just a gentle bend done with my fat fingers) to take a piece of wire that would be a flag-staff.

I'm nearly finished doing another for the Graf v. Bruhl Saxon infantry regiment - I'll get an image up tonight or tomorrow.

Posted by Bloggerator at 8:11 AM 3 comments:

It’s spring, the time of year when a young man’s fancy turns to kleine kreig.

I think that my sub-conscious must have been grinding away at this topic in the background. because I was cycling to work this morning and (as seems to be the case with me) apropos of nothing in particular I started thinking about Croats and Prussian Infantry.

Lets say a battalion (or any formed, regular unit, has six break points. Let’s also assume that a unit of Croats would be furnished with only five. I’m only plucking that number out of the air because it works agreeably with dice. The name “break points” could just as easily be substituted for “cohesion” points or “disruption points”.

What if, thought I, a commander of line Infantry was able to choose to open his order out at the cost of two break points? They could then act just like those rascally Croats and counter-skirmish but would be much closer to the point (let’s say three break points) where they would start to suffer unlovely consequences such as at the start of every move a dice is thrown and the number indicated is equivalent to the number of figures who have decided that now is as good a time as any to abandon the ferocious discipline of IR13 for a more felicitous regime.

Break points could be lost as a result of line losses and Officer casualties. Chaps lost to the flight to the rear would be counted as casualties. A large number of casualties in a move would lead to the loss of a DP. No officers left would equal another lost DP. Being exposed to cannon-fire might be worth a DP over and above the casualties caused.

Fleeing/ fled troops could be rallied by being joined by an officer.
Going back to our infantry sacrificing a couple of DPs to get to grips with the Croats, they’d find their advantage lay in having a higher starting number of DPs to play with. Also, as things got tricky for the line infantry, they could re-form their ranks and recover the sacrificed DPs. The Croats would not be allowed to form ranks, and would be at a fire disadvantage against formed troops in the open.
Posted by Bloggerator at 7:49 AM 1 comment:

Unbelievable! You'd think I've run out of things to say! Or had been really busy.

Well, having set up that straw man, let me knock him down by saying I HAVE in fact been rather busy. Does that work?

Just in the past week-and-a-bit, my Eureka 100 Club submission (one I'd just about given up hope on!) has gone live.

I'm really waiting on Eureka to get a prospectus out to all those folks who expressed interest in my Arquebusiers de Grassin (and thanks to all of you who've hung in there) to confirm their interest and we are on. I spoke to Nic today and he expects three comand, and 4 or 5 skirmishing poses. I remarked to him that his line of skirmishing "ragged continentals" had greatly impressed me, so those are the spread of poses we'll be looking at.

I've also been swapping info via TMP (under the byline "jetboy" - it's a short story with no place here!) with another gent here in Australia on the Saxon Army in the mid-18th Century for another Eureka 100 Club submission which has also just about gone live.

Eureka will be getting very used to sculpting tricornes, I'd say! If anyone out there has an idea for some unique project they want to get off the ground, there are worse places to start.

I promise to get on with the Alzheimer-Vulgarian skirmish soon. Donald? How's your availability?
Posted by Bloggerator at 8:31 PM 1 comment:

Voleur des Coeurs looked steadily at Manstein and said: "No. No head cracking. That is not proper military behavior. Besides, it's unfashionable. We shall behave in a proper military fasion and defend this ruin."

Theo, in a voice that surprised him by quavering only a little spoke: "Ought we not retire to the boat?"

"Oh, good heavens, I can never understand you people! No! We shall stand here and fight. Like Leonidas at Thermopylae, we shall fight our position and stand our ground!" Voleur's hand stole inside his jacket. He stood very erect and Theo thought he looked very noble.

He couldn't bear to remind him of what had happened to Leonidas.
Posted by Bloggerator at 7:20 PM No comments:

Doings in the Dutchy

Just quietly painting away at my Volontaires. I'm hoping to get the final few finished off by tomorrow so that I can start doing a troop of dragoons to go with them. My eventual target is to get three eight figure companies of fusiliers , a company of grenadiers and eight dragoons. My intermediate target is 16 fusiliers and four dragoons.

Does anyone else build their units this way? For my line infantry regiments, my next upgrade (as it were) will be to take out the officers and musicians and stand them behind the line of battle and beef up the five constituent companies to ten figures from the current eight. This will probably be my "job on the side" while I'm working on something else.

I'm really looking forward to Battlegames 4 coming out - today's teaser from Jerry L concerning a Beowulf game has me rather intrigued! I'm rooting around for my Gollum fugure to paint up as Grendel. I'm realy enjoying researching the period; currently my interest is taken very much by the idea of building a "Middle-Saxon" army to represent King Offa's army. I've also been reading snippets of Beowulf for flavour. The Saxon invasions of about the middle fifth century also have an appeal that I can't deny. Those GB "Arthurian" figures appeal strongly, especially in the context of the warlord Arturus...

Does this strike a chord with anyone?
Posted by Bloggerator at 6:56 PM 2 comments: