Hey, I’ve been uncommonly quiet over the past week and a bit.

I’m sort of in between orders from RSM – having run out of Dragoon castings to paint - so I’m painting a few other bits and pieces.

Speaking of that latest RSM order (which went out on June the 15th), it looks like a very cavalry-oriented time is coming on for me. I’ll discuss them in a little detail:

3 x S1-105 English Trooper Charging (I like to use these as my squadron-officers these will be for the Bavarian Dragoons)
12 x S2-109 French Light Dragoon (I’ve finally caved in and admitted to myself that I desperately want a squadron of Schomburg Dragoons)
4 x S5-022 Prussian Gunner in Waistcoat (I’ll be painting these as some Infantry regiment or other to assist a couple of gunners manning a battalion gun – a bit of an experiment, we’ll see how it goes)
6 x S5-101 Prussian Hussar in Mirliton (I decided I wanted to paint that snazzy-looking Prussian Hussar Reg’t who were all dressed in black)
11 x S6-104 Austrian Hussar in Busby (re-inforcements for the Croats, and the first of two squadrons)
8 x S6-105 Austrian Dragoon Trooper (to become the residue of the second Squadron of my Bavarian Dragoons)
26 x LH-005 Galloping Horse - Legs Spread (I’ll be painting a lot of horsies!)


I have alluded to this a bit in my previous post where I seem to have a lot of French odds and ends on the table. I’m working up toward a commitment I made to Bill P to get some troops painted for a 1:10 Fort Ticonderoga game that he and some other fellows are putting together for 2008, being as it is the 250th anniversary of the battle.

This project will let me paint up a whole pile of castings that were just gathering dust and give my French and Indian war collection a bit of a kick on – which it has been needing for ages now. I’m quite excited by this one, and I’m thinking I really ought to get the new troops blooded before they climb into a big cardboard box and fly to the US!

I’ve really been looking closely at my RSM French castings. I think they could easily stand in for some Spanish and Italian regiments of the Italian phase of the War of the Austrian Succession. Just thinking and imagineering as I flip through the pages of my Stephen Manley booklets…
Posted by Bloggerator at 7:17 PM 6 comments: 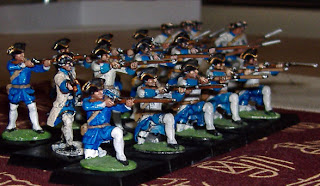 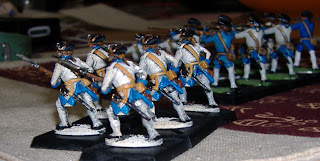 Alzheim troops experiment with the newfangled three-deep firing line while the Grenadier Company of the Languedoc Regiment practices it's bayonet drill.
Some of the men appear to be training in their waistcoats only!
For shame! Whatever next? Gunners shedding their coats in the Service of their Pieces?
Posted by Bloggerator at 8:44 PM 6 comments: 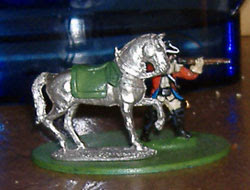 I'll make another and pop him (her?) on the same base for my horse holder to - er - hold while his mates are off playing.
I'm getting just a little better at manipulating the greenstuff. I hope!
Posted by Bloggerator at 11:23 PM 3 comments:

Posted by Bloggerator at 8:09 AM 2 comments:

It's been a while since I'd gotten my new Dragoon regiment out and "played" with it.

Here they are then as they stand at the moment; the dismounted "B" Squadron is skirmishing on the outskirts of Strudelburg whilst the mounted "A" Squadron surges past them to drive back the enemy Croats (out of the picture) who've been attempting to worm their way into the village.

At least, that's what's going on in my imagination.
Posted by Bloggerator at 8:29 PM 5 comments: 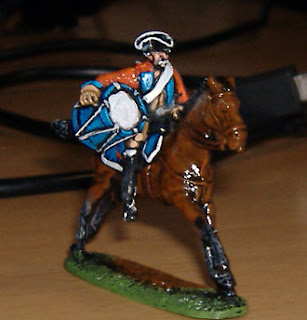 Finished him off last night while watching a really bad horror film - "Descent". Six women go caving and fall foul one by one (naturally) to a bunch of devolved troglodytes. One accidentally injures another and in her turn is vengefully wounded and left to die.
Nice ethics, I have to say. Another play on the torture agenda that "24" is so keen to push?
Certainly it gave me the motivation to concentrate on painting.
Strange to say, I have no information on Bavarian Cavalry musicians, so I just painted him in the same uniform as his fellows.
Posted by Bloggerator at 4:31 PM 9 comments: 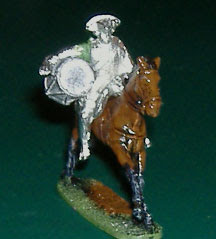 Here's a little teaser for you. I got bored tonight watching TV, so I chopped up a Dragoon at last and turned him into a drummer for my Kurfurstin Dragoon regiment.
He has since been undercoated.
Posted by Bloggerator at 11:04 PM No comments: 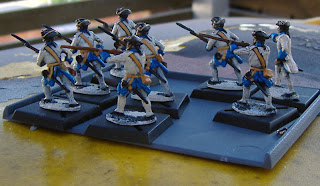 It's been a slow painting week so far. I'm nearly finished with these French troops who could as well be from the Compagnies Franches de la Marine or from the Languedoc Regiment. I like the idea of them being the picquests and Grenadiers of the Languedocs quite a bit. Time will tell.
Just to throw out a query, who thinks that any French regiment in north America had it's Grenadiers in Bearskins? I know of one re-enactment group that does this, and that there is a description of British troops plucking the "plumes" from the hats of French Grenadiers after Quebec, but it seems that this is too early in the Seven Years' War for many of the French infantry to be wearing this king of head-gear.
Opinions?
Posted by Bloggerator at 10:38 AM 4 comments:

This afternoon, I've gotten the white painting completed, and I've just finished off the facings. Next will be the remaining belts and the muskets.
I am resisting so many of my regular painting habits at the moment..!
I hate to do this to you all, but they look much better in the flesh!
Posted by Bloggerator at 7:30 PM 1 comment:

I'm gearing up to run a small side-project over the next 12 months that ought to see me painting about 72 french infantry. It's for a demonstration game in the US - basically I'll be sending my troops to stand in for me! So, keeping in mind that they'll be representing me, I thought I'd try to give them a better-than-normal paint-job. My goal is to more accurately portray the gris-blanc coats the French wore and to do more justice to the surface detail sculpted into the clothing of my favoured RSM miniatures.

This image gives a pretty fair indication of what I've acheived to far and how the figures look at "life-size". Click on the image for a much larger (and less flattering?) picture.

The effect was acheived by first undercoating in white from a spray-can, washing over in thinned black ink to provide all the shading and then highlighting. My first highlight shade is an off-white done with Vallejo "Buff" and white in a roughly 1:3 ratio applied from the top of the figure down as a heavy "damp-brush with a large brush. The next highlight is the remains of the first shade still adhering damply to my palette with an additional squirt of white mixed into that. This is then more lightly damp-brushed down the figure again from top to bottom. The final step will be to take a little white, slightly thinned, and applied to the most prominent "tops" of details.

The overall effect I hope will be to produce a figure that will appear to be lit from the top. The dry/damp brushing picks up the surface detail quite nicely. I'm fairly confident the final highlight will tidy things up and make the final effect look less dry-brushed, as too will the more conventionally layered painting effects that I hope to obtain painting the smaller areas of facings, belting, faces and so on.

I am tossing up matt or at least satin varnishing these. With the gloss varnish I normally use, you do seem to lose subtle detail.

I ought to be able to get the first eight finished today - along with some Strudelburg bits as well - and get another picture up tonight.
Posted by Bloggerator at 10:07 AM 2 comments: