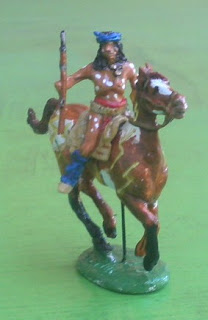 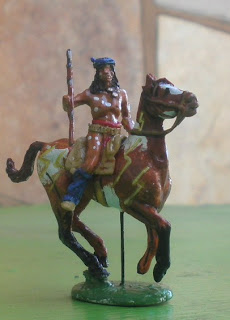 I also got a few other Apaches and Comanches as well as a few US Cavalry. not to mention a half-dozen Landsknechts in Pluderhosen who would not look out of place in my "Siege of Malta" project.
Posted by Bloggerator at 7:12 PM 2 comments:

Today I applied the last coat of spray gloss varnish to the Gestalt Dragoons of Colonel Zigmund Freud. 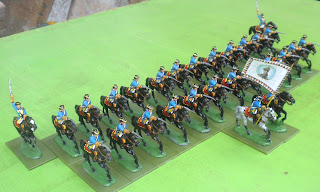 I was wanting to post a brief update on the latest of the Imperial Cavalry Regiments I was working on. 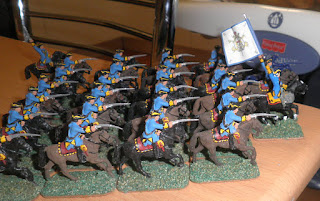 Just to refresh your memories, this is one of the "before" shots of the unrenovated figures. 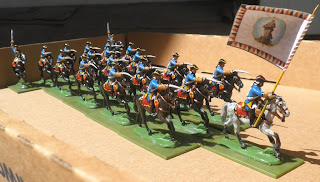 Here are the latest "after" shots. As you can see, I've completed 17 of the Troopers and three of the Officers. Only 7 Troopers and the Regimental Colonel to finish off and then I can start on a regiment of Imperial Foot I have been thinking about. I guesstimate there is about another day and a half's work to do on them before I'm done. 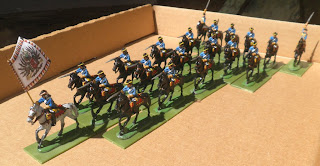 I'm open to suggestions for a name for this unit.
Posted by Bloggerator at 12:54 PM 5 comments:

Hello there. I've not dropped off the twig entirely, just been a bit quiet.

I've about finished off the last 18 figures for the la Rosee Regiment - if you remember from the "Grand Review" they were 17 fusileers and a mounted officer short-handed. That has now been remedied; the colonel needs a bit of paint and we'll be all done there. Photos to follow.

I am currently working at freshening up the paintwork on one of the dragoon regiments Gary donated to the project. The troopers glory in a mid-blue coat with yellow turnbacks, a red shabraque with a snappy yellow and black lace edging. I'll post some 'before' photos this evening.

Unlike the Comardo Dragoons, these will not get a full repaint, but more a bit of a touch-up and re-modelling. I will post some images of the test figure I am doing as soon as it's complted. These lads will be joining the Imperial forces. Has anyone a suggestion for a name? Perhaps something inspired by the Austro-Hungarian Army?

UPDATE: The first two test figures have been completed.
I finished retouching the first two of the Imperial Dragoons this evening and was quite pleased with the result. I think that the fairly simple "tarting up" serves to bring the figures in line with my own painting style whilst remaining pretty true to the spirit of the originals.
Took about 40 minutes for the pair of them. Most pleasing!
Posted by Bloggerator at 2:28 PM No comments:

Not much more to say, is there?

Absolute agony to finish up all 28 figures in one go. Imagine painting 28 faces, 28 pairs of breeches, 28 swords etcetera, etcetera...
Posted by Bloggerator at 6:43 PM 10 comments: 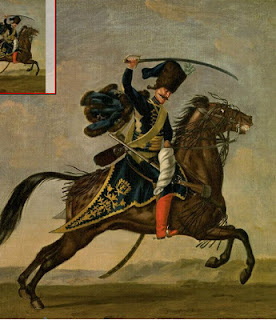 For my next Imperial regiment, I decided to build a Hussar regiment and eventually settled on the Kalnocky Hussars on finding this portrait by David Morier in the Royal Collection (available online). I have been painting madly for the past week and a half and can report that the bulk of the work is done, up to and including the (much simplified) yellow lace and frogging. I'm painting in the rest of the fur detail tonight and will be knocking off the final details of betls, glove muskets and so on this weekens if all is well. Pics on Sunday night?
Afther these chaps are finished, it's on to the last 18 figures of the La Rosee regiment.
Posted by Bloggerator at 3:28 PM 2 comments: