Rorke's Drift Terrain - The Calm Before the Storm 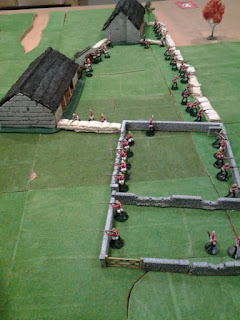 Our Rorke's Drift Terrain is almost complete. The main terrain element still missing is the stone wall that ought to be in the region of the tree with the orange foliage at the top right of the picture.

You may note that the biscuit box retrenchment wall is missing in these photos, as is the mealie redoubt. This is because these features were added during the action and so they will not be there at the start of the game. 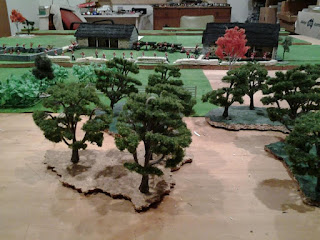 A Zulu's view of the station. The vantage point is the garden of the mission station. I have decided to represent it as an orchard as I have seen it described as both a garden and as an orchard. In game terms it means that any Zulu hiding there can only be hit on a 6! 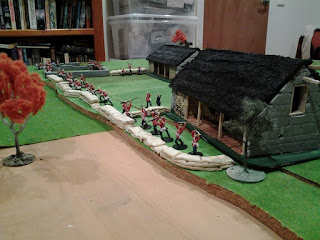 This section of the barricade was not manned during the fight as it formed an exposed salient in the line. Rather, the men lined the 'dog-leg' barricade to take attackers in enfilade if they tried the porch. Note that any Zulus who make it onto the porch are pretty safe! 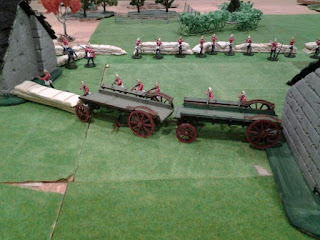 And finally we come to a view of the rear of the position seen from from the terraces rising up to the Oskarberg. Note how vulnerable the men at the far barricade are from the rear from any elevation. Note what an intimate space it is. It's a good thing the Zulus are poor shots.
Posted by Bloggerator at 8:22 AM 4 comments:

I'm preparing to put on a Rorkes' Drift game for some of the lads in the next fortnight and have been putting some terrain together. This was originally meant to be a convention game for Little Wars Melbourne. Sadly, convention was cancelled, so I have decided to put it on as a somewhat lavish game here at home. 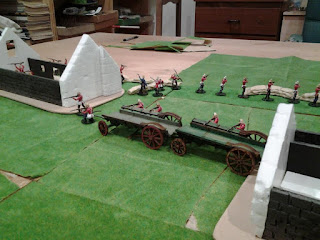 Some really excellent Ox Wagons by 4Ground painted by me to resemble Boer carts with green bodywork and  red wheels with the paints just washed on over the MDF which I feel gives a somewhat weathered effect for very little effort. Unlike the movie, the wagons at the station were not tipped over to form barricades. Rather, they were run together with sacks of mealies and biscuit boxes used to cover the gaps between the wheels. 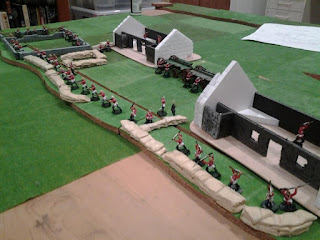 The mealie bag walls are made from DAS air-drying clay. I rolled it out, flattened it and then marked in the divisions between the bags. Strips of them are piled up to make lengths of wall 10-15cms long. 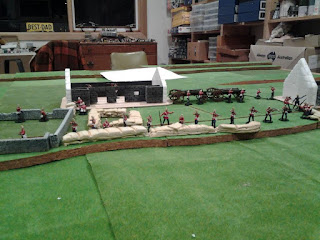 On the south side of the station was a rock wall about 2 metres high. I can't think of too many games I have read about that have made much of the difficulty the Zulu's would have had assaulting this wall. I have chosen to give the British a bonus in hand-to-hand combat if they are defending from an elevated position to reflect their advantage. 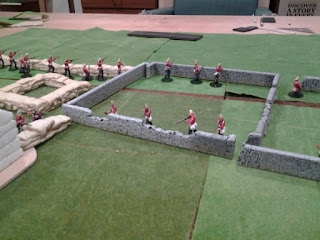 This is the so-called well-built kraal. I threw it down from Italeri stone walling. This is a very useful and flexible piece of terrain from this well-regarded manufacturer.

Shewing the basics of the building's I'm making up is the Storehouse. The black walls are 5mm foam-core with the paper soaked off one face and with detail etched in with a sculpting tool. The gable walls of the station were of stone, so I used the 10mm foam-core I had in store. It's chunky and takes etched stone detail really well. I used the same technique for texturing the surface. The base is 3mm MDF which I cut out with my jigsaw and sanded with a block.

More as we get closer to game day.
Posted by Bloggerator at 2:17 PM 1 comment: