Getting the painting wobbles…

I’ve spent most of the past week painting a few old Willies and some Stadden command for IR 35. I had been wanting to be doing a really good job on these figures; not only do they cost an awful lot of money, but they are also my beau ideal for toy soldiers.

The upshot of the whole experience has been to convince me of a few things.

You know whaen you want to do a really, really, really good job painting figures and then just can’t? This happens to me every time I lay my hands on some particularly beautiful or coveted or expensive castings. All of a sudden I am a sausage-fingered idiot with a four-inch brych trying to paint the cross-belts on a 30 millimetre figure.

Sure, and I can paint just fine on any figure I have decided I don’t care about. Perhaps a solution lies in this direction? Perhaps I ought to get good and drunk before I touch my next Willie?*.

Which leads me in a near-perfect segue on to the new Willies.

I have only briefly seen the new ones – incautiously ripping open the mail one afternoon last week to discover my birthday present (roll on March 22nd!) – and admit to some mixed emotions on seeing them.

I have always really liked the older Willie castings for the light and graceful style of their design, but was getting very tired of trying to repair some really shocking imperfections in the castings which for the asking price were really unacceptable.

To me the new Willies are very much based on the old masters, changed somewhat and improved in terms of the research behind them and the fact that the old moulds look to have been re-made from the “new, improved” masters.

That’s all to the good, but (and this is going from a five-minute peer through the plastic baggies) it looks to me that the castings still have certain faults. These are not as bad as in the old range to be sure – I have a couple of French Infantry with lower arms attached by a metal “thread”, and British drummers with no fore-arms – but I saw at least two castings of the 32 I bought with significant pits in the backs of the figurines.

At GBP12.95 per eight castings (or about $AU31!) I’m not too sure as to whether I ought not just wait on Minden Minis or even just buy RSMs!

Has anyone else bought any of the new Willies and seen this problem? I’ll do a more thorough review when I can get my hands on the figures toward the end of March.

UPDATE: I recently bought and started to assemble some of the new customisable GW movement trays.

Initially, I thought that these were a great idea - customisable movement trays that you can size in 20 or 25mm units. Then I started to assemble them. Why (oh, why) are the edge pieces that you glue onto the traysides and front not themselves made in lengths corresponding to multiples of the 20 or 25mm units that make them up? Am I being obscure/silly? It makes sense to me to make the "edges" in - say - 75 or 80mm lengths.

Oh, and instead of providing "corner" pieces, why not just bevel the ends of the "edges"?

Is it just me, or do they seem to be quite bad examples of design?

The third move saw the Alzheimer side continue to mine doggedly forward. Their three mines now projected three inches forward of the lip of the glacis.

Meantime, the Gallispans had repaired their right-hand sap and opened a 48" second parallel. At the right-hand end of it they promptly emplaced a battery of two guns, having judged that it was time for them to begin striking back at the Alzheimer artillery.

The five Alzheimer hits demolished the entire Gallispan second parallel and the battery they had planted there, but not before it had itself fired it's guns in defiance, scoring a single hit on the number two gun in the Kurprinzessin ravelin. This hit dismounted the gun.

NOTES: Gunfire is simultaneous. A hit on a gun happens when a six is rolled - the gun is irreparable on a roll of a further six on a d6. The ALzheimers will have to use one of their working parties to repair their gun if they want to have it ready to fire next move.
Posted by Bloggerator at 7:35 AM 1 comment: 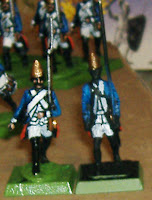 The Fusilieers are coming along nicely enough. I'd say they are about two-thirds complete, with the remaining rank and file of the third of four companies due for completion tonight.

I will then get cracking on their command. I took Jim Purky's advice and bought Stadden command to go with the RSM rank-and-file, and they are a very good match being as they are of a somewhat smaller stature than the rest of the Stadden Prussians.

I'll do a comparison photo tonight to demonstrate.
UPDATE: I finished of the third company tonight - that's them in the second picture from the top of the page. I've also included a picture of the Stadden Fusilier NCO for a point of comparison with the RSM fusilier with the cheeky look on his face. Note also the part-painted Officer and fusilier drummer ithe the completed company.
Posted by Bloggerator at 7:03 PM 8 comments:

It was common practice to borrow infantry from their parent regiments to serve the battalion
guns with the aid of a few artillery-men.
I've decided to pick up on this by painting a few of my gunners in the uniforms of one of my French infantry regiments - Languedoc if memory serves. Obviously they are not serving a little battalion piece here, but a monster siege piece.
Note that the gunners are doing the things that require artillery skills whilst the infantry are providing the brute labour!
Gunners are by RSM, the gun is a Willie/Suren.
Anyone have any Willie Artillery they'd like to part with? The Gallispans are in dire need. Seriously.

Posted by Bloggerator at 7:38 PM 9 comments: 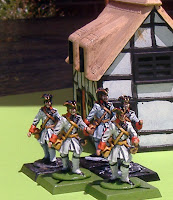 I've had a long standing thing for Edward Suren's "Willie" range of figures.
With one of the OSW crowd talking up the Regiment he's working on, I was prompted to pull out the ones I'd bought a few years ago. Looking at the paint jobs, I decided it was time for a thorough renovation.
I also thought this would give me something to do as I waited for the temptation to buy some of these frighteningly expensive figures to go away.
That didn't work, did it? I've since bought two packs if the Line infantry, a pack of the Foot Command and a pack of the Mounted Command. I've decided that my old Willies will form the second line of the regiment I build.
I'm really not very good at resisting temptation. Perhaps I may need to build an Old School Brigade?
Posted by Bloggerator at 4:08 PM 7 comments: