All done at last. This was a very happy project that went ahead with no real problems and painted without a hitch. Even the experiment with "chipping" went reasonably well.

Ahh, General Bergonzoli, your caravan will always have a special place in my heart.
Posted by Bloggerator at 8:21 AM 2 comments:

All bits built, undercoated and test fitted together. Painting next. I've been painting my Italian vehicles with a mix of Vallejo Ochre with a dash of green thrown in as a base coat. This gets followed up with a sepia wash, another heavy over brush of the base colour then a couple of dry-brushed layers of highlighting. on top of this goes a very light dry-brush of dark green to represent the original colour of the vehicle revealed when the sandy coat starts to wear off.

Posted by Bloggerator at 8:27 PM No comments:

Well, here we all are then. Going on with my minor obsession with the North African Campaign at the moment, I went a bit mad on eBay and bought (at outrageous prices) both "Monty's Caravan" in it's original Matchbox box and the insanely pricey Italeri 90mm dual purpose gun on the Lancia 3RO Chassis.
The idea is to create a command vehicle for my Italians. It's mentioned in the Matchbox instructions that the caravan body originally belonged to Annibale "barba elettrica" Bergonzoli, but was captured by a flying column of 7th Armoured Division in February 1941 after Beda Fromm. From (no pun) there it went to an HQ ordanance depot in Egypt where it was demounted from it's Lancia 3R0 chassis and popped onto a Leyland Retreiver 4x6.

I intend to reverse that conversion with one of my own!

Having, as I said before, spent a huge sum on these two kits I was more than a little nervous at the prospect of fit.
But all's well so far.

You may note that the van body test fitted has a spider web in the rear window. It's another I meant as a straight out-of-the-box build that got set aside "some time ago".

And here we are in full mock-up mode with all the major bits test-fitted. I might change out those rear mud-flapd for fully round mud-guards from one of the Airfix RAF sets. As I build the new caravan body, I will blank off the windows which gives a better look than just the bare, undetailed interior. I suppose for the sake of consistency that I ought to do the same to the cab.

Posted by Bloggerator at 8:39 AM 4 comments:

I've just been doing a bit of back-of-the-envelope RF! figuring to stick together a battalion of French Renault FT tanks mostly just because I like the HaT kits. So without further ado:

*May replace with Gun Tank as the Radio Tanks did not seem to last very long!

** If desired, add an extra MG Tank to each Company. An earlier organisation decentralised the reserve to the company level.
This organisation represents a full strength battalion. Attrition rates were high due to mechanical and terrain issues. It was not unisual for a Battalion to lose 50% of it's strength within a day or so of going into action. In this case, replace two companies' complement with MG Tanks and delete the

Source is Zaloga's book on WW1 French tanks. The errors of interpretation remain entirely my own!
Queries criticisms or comments?

Posted by Bloggerator at 3:24 PM No comments: 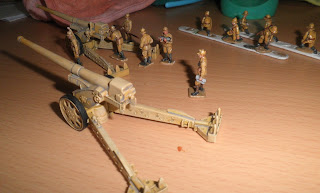 I just finished painting the crews for some of my Italian Artillery. The guns themselves are Italeri 149mm - only a dozen made it to North Africa, but...
The gunners are those which came with the kit - only a few so far, but the rest are ready to go. In the background are another half-dozen by Mirliton to man in turn with some Eritrean Ascarii a 65mm infantry gun which I bought recently.

More news as it comes to hand... Afrika Korps recce vehilcles in production...
Posted by Bloggerator at 8:21 AM No comments:

What more could you want?

These will be joining my Eureka Myceneans as a 24-figure-strong unit of allied skirmishers.