A Couple of New Recruits 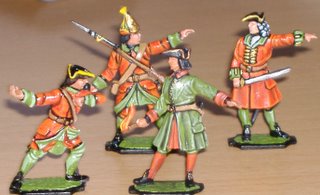 The pikeman (left foreground) still needs his pike of course.

The mould that produced the Gunner in the green coat was an absolute bugger to cast. I think I had to try about something like eight times, and vent the mould in about four places to get it starting to work satisfactorily! Anyone got any hints or tips they'd like to share?

I think he looks nice now, though...

Can anyone tell me when the Saxon Army abandoned the pike in favour of the bayonet?
Posted by Bloggerator at 8:04 PM 4 comments:

A Bit of Fun

I have to say that I've been finding painting up my Prince August semi-round miniatures a lot of fun.

Just the fact that I can go and cast up another few whenever I want is liberating in a way that I never really thought of before. I'm a lot braver in how I paint them - I always was wary of painting the larger-scale miniature. I thought my painting technique might not be up to it, and I could never bring myself to ruin an expensive miniature. With these I feel as though if I want another all I have to do is melt doewn some tyre weights, sinkers and GW miniatures and I can bang out another few of what I want! It's a good feeling. It's hard on the poor old tyre weights, though.

You may have noticed that I am painting them up in uniforms more-or-less modelled on those of the Saxon Army up until about 1739. I found a German-language book on the army of August the Strong that I bought a few years ago and which covers everything I think I could need to paint up a few regiments and some gunners. I feel the Prince August moulds are better off depicting armies from the earlier part of the 18th Century (especially the HE ones) and so therefore the red-coated Saxons.
Posted by Bloggerator at 5:28 PM No comments: 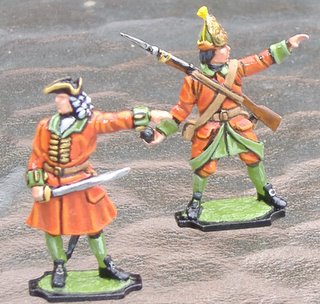 OK, I'd thought of calling them Garnisons-Regiment Mauerscheisser, but that'd just be unpleasant.
Posted by Bloggerator at 11:29 PM No comments: 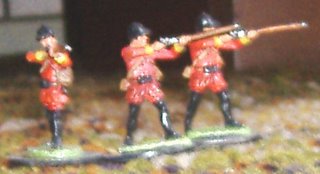 British (erm, "Englandian") Light Infantry from the French and Indian War... Just waiting for the right project to employ them...
Posted by Bloggerator at 9:39 AM No comments: 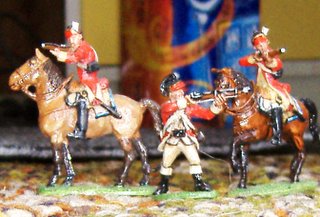 I read about the Battle of Emsdorf in my Blandford on the Seven Years War. I thought wow! this would make a nice little self-contained project. This is as far as it got...
Posted by Bloggerator at 9:19 AM No comments:

Rather a lantern-jaw, I'm sure you'd agree.
Posted by Bloggerator at 8:50 AM No comments: 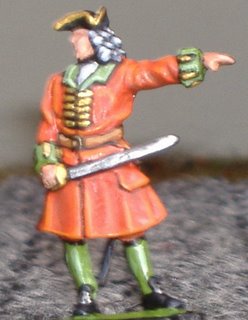 I was inspired recently to get my hands on some of the Prince August moulds by the work of Steve Cady, fellow member of the OSW group and a masterful painter. Just today I finally have plucked up the courage to paint my first ever semi-round miniature.

I decided he would be from the Duchy of Alzheim in the 1720s or 30s, a relatively little-known period of the Duchys' past when her soldiers were still wearing the Red coat they abandoned in 1740 for the White. This change probably reflected the internal politics of the State at this time and the predominance of the "French" party over that of the "Saxon" at court.

The bold young infantry officer depicted here (from information taken from the portrait showing him at the time of the War of the Poltroonian Succession) is the Graf von Eisenessen* perhaps better known later as the Marquis de Soubre-Whelm from the title awarded him by a young Louis XV for his actions at the breach at the Seige of Protzhydenlohe. As close students of Alzenheimer history will be aware this was the one major action the men of Alzheim took part in, and this was trying enough to wear the heart out of the army. It is said that the Officers' mess bills for Champagne were enough that they took only a minor part in the better known War of the Austrian Succession.

*Not a relation of Trinksblut und Eisenessen as related by Colonel Grant (99th) in his "What a Game We Make of War" - London 1767.
Posted by Bloggerator at 8:17 PM 2 comments:

Take a quick voyage over to the Seas of Fate - a page I'm putting together to hold my fantasy-related materials.
Posted by Bloggerator at 2:30 PM 2 comments:

Take a look at the "Colonial Capers" link in the links section on the right of this page. It's a shortcut to my Colonial wargames blog. Just starting up, but there are a good few posts (mostly pretty pictures for now, but there is a battle-report) worth taking a look at (I hope!) - see you there!
Posted by Bloggerator at 7:50 PM No comments:

Things are quiet here. Too quiet...

Is that a rustling in the woods over there?

I think we might send the light infantry to take a look.

This weekend coming, I will do a small battle between the light infantry forces of Englandia and the GSH Duchy of Soubre-Whelm. I think some nice pictures will be in order.

Who wants to suggest a scenario? I'm thinking about 20 figures to a side - perhaps 15 Infantry and 4 or 5 Cavalry. Objectives? A missing Vivandiere? A misplaced barel of spirits? Rival groups of foragers?

Let me know.
Posted by Bloggerator at 7:07 AM No comments:

I note that they are the same trees that Mr CS Grant used in his wargaming setup.

Perhaps I could start doing some "lift-off" balsa buildings?
Posted by Bloggerator at 7:03 AM No comments: